Trained As Her Fuck Toy (2)

He was getting used to the chastity device, it tended to wake him in the mornings when his cock often tried to get hard but it was almost invisible when he was dressed and he had learned to shower with it on and keep it clean. He was a trained fuck toy. It had been a week since his first meeting and he opened the letterbox to find a white envelope labeled “For Fuck Toy”. He winced at the memory and opened it to find a simple message:

“Report to the shop at 4:30 today and tell the assistant that you are looking for a uniform for a fancy dress party. She will hand you two sets of clothes and show you to the changing booth. She will also give you an envelope with further instructions. See you soon. Mistress. “ The rest of the day passed in a haze but promptly at 4.30 he entered the shop, was handed the clothes and entered the booth. Bolting the door behind him, he opened the second envelope. “Strip, face the mirror and wait”

He stripped off and wearing only the chastity device, looked into the mirror. Suddenly the lights went off and he heard the mirror swing open. His hands were taken and he was led through the doorway. Dim lights came on as the door closed behind him and he saw that he was being held by the two masked cat maids in front of the latex clad trainer.

“Welcome back, Fuck Toy. Your Mistress was pleased and now wishes us to test your oral skills before she starts on today’s training. Mask him and take up positions.” He felt a mask being pulled over his head. Unlike the previous one, this felt like a rubber and was open around his mouth. Again it locked around his neck and he was thrown into darkness. He felt wrist and ankle straps being attached and a butt plug with a tail inserted into his ass. Then he was pulled across the room, his hands restrained behind his back.

“Kneel” came the order and he was pushed down to his knees. His head was pushed forward and he smelt the sweet musk of a female pussy as he felt legs being draped over his shoulders. “Worship the pussy.” He kissed and licked at the hot wet pussy that his head was enveloped by. Carefully he worked his tongue into the tight cunt and then licked at the hardening clitoris, the juices ran into his mouth and he could feel the pain of his cock trying to stiffen inside the cage surrounding it. He kissed, sucked and licked; feeling the arousal of the woman enclosing his head, her legs tightened on his back, high heels digging into his skin as he worked her towards a climax.

“Crack!!!”A crop lashed across his ass. “That is enough. I think that you have passed that test sufficiently.” He heard a moan above him as he was pulled away from the woman who was almost at orgasm. “You, little cat, will wait until I am ready to give you pleasure. You will be restrained until you have calmed down. Toy, you did well, stand up”

Hampered by his bound wrists he struggled to his feet and was led across the room and through another door which he heard close behind him. “Hello, Fuck Toy” husked the familiar voice “You really got that little maid going there, most impressive. You may find that I am more demanding. Now first let your Mistress prepare you.”

He felt her hands between his legs and the cage being removed from his genitals. His freed cock stiffened and he heard her chuckle. “Good Fuck Toy, get nice and hard for your Mistress. If you do well I may give you relief later. Now stand still, your Mistress has another gift for you.” There was a swishing sound and he felt pain across his bare ass cheeks.

“Count the strokes Toy!” He counted to ten by which time his ass was burning. “Just to remind you what happens if Mistress is displeased, my multi tailed flogger is a good way of punishing naughty toys. Now lie face down on the bed.” She pushed him forward until his knees collided with the bed and he fell on to it, wriggling around until he was lying down with his plugged and sore ass in the air.

An Overload Of Pain And Pleasure Senses

Obediently he started to lick and kiss her vagina, licking and sucking on her clitoris, fucking her with his tongue. Her hands played with his cock which quickly responded after a week in chastity. “Good, your balls are nice and full. I’ll enjoy milking those later. First though, Mistress promised to decorate Toy. Keep worshiping me while I make your little titties pretty.”

Suddenly he felt his nipples being clamped. Any noise he tried to make was muffled by her crotch pressing down on his mouth and she laughed as his body twitched under her weight. The throb in his nipples was slowly fading as she started to play with his cock and balls. Pleasure and pain flooded his system as her juices started to flood into his mouth. 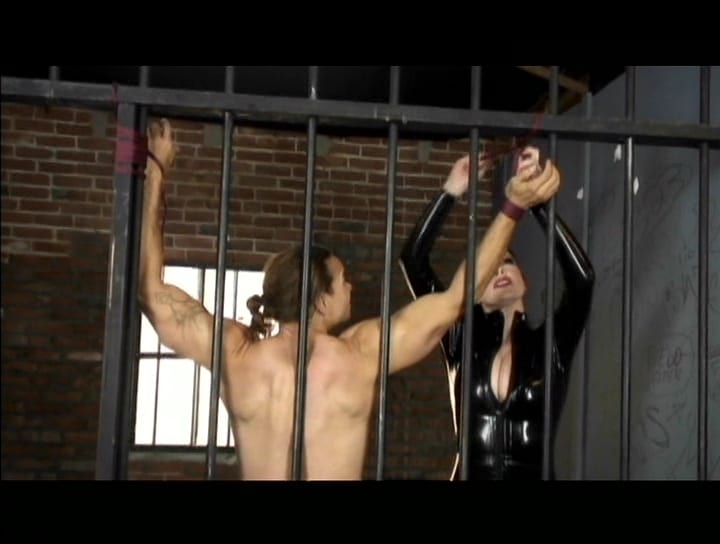 He lapped at her cunt and sucked the last trickle of fluid dripping from the engorged lips of her vagina and she slowly lifted herself up. Kneeling beside his body she looked down at him.“Very good Toy, I think you got nearly every drop. A little bit of overspill perhaps but it makes good lubricant. Now be patient and I’ll be back in a minute with your next treat.”

He felt the bed bounce slightly as she got off and heard her open a drawer. He lay, breathing deeply with the smell of her carried on every breath. She returned and he felt her adjusting his restraints and moving his head to the side. Something rubbery pushed at his mouth.

Open Wide And Suck On This

“On your back now Toy. Time for Mistress to reward you for being satisfactory so far.” He crawled back on the bed and lay back. Quickly she strapped his wrists back to the bed frame and then started to play with his cock until it was stiff and erect. Straddling his body she lowered herself onto the stiff dick. Her slippery cunt swallowed it up easily and she started to ride it. As she slid up and down his shaft, her hands tweaked his nipple clamps and played with the plugin his ass; the pain sensations from these areas inhibiting his urge to cum.

He heard her move away and then a door opened and closed. He lay on the bed exhausted and hardly noticed as soft hands removed the mask and released his restraints. The trainer looked down at him on the bed. “Wash him down and then I’ll give him the instructions.”

The two cat maids helped him off the bed and placed him in a shower cubicle. One of them was now wearing a latex cat suit and she joined him in the cubicle and washed him down. The two of them then dried him and held him as the trainer approached. She handed him a small silk bag.

Here are your training aids, instructions are enclosed. You will be expected to arrive for the next session wearing the largest plug. If you fail, then you may experience some discomfort not to mention punishment from your Mistress, so I advise you to be diligent. Goodbye for now.” He was escorted back to the changing cubicle and after dressing, made his way out of the shop.
Join Femdom.Dating