Trained As Her Fuck Toy (3)

Friday had arrived again and he had dutifully kept the largest plug-in place all week. As he bent down to pick up the white envelope on the mat he felt it slipping and held it in as he lifted the letter. He sat carefully on the couch and felt it settle back into place as he opened the envelope.“Usual time, usual place; take the two enclosed tablets just before you set out.”  shook two small pink capsules into his hand.

He hoped that Mistress would be there tonight as two weeks in chastity was becoming uncomfortable and he counted the minutes through the day until the time came to enter the shop. Collecting the usual bag from the smiling lady he entered the cubicle and stripped off. The only item in the bag this week was a lacy pink peephole bra which he dutifully put on and waited in front of the mirror.

The maids pulled him through the doorway and a hood slipped onto his head with a gagging mouthpiece that was pushed into his mouth and he felt it being locked at the back of his head. Hands held him and he felt another pair of hands pull back two flaps to allow him restricted vision straight ahead. He saw a masked face in front of him.“Hello Fuck Toy. The trainer was pleased with you last week so your Mistress is pleased as well. I am still very busy but your submission to me must be reinforced so I have made time to use you and remind you that you are my property. First your collar.”

She slipped a collar around his neck and he heard the lock click shut.“Now follow your Mistress.” She pulled on the attached lead and he obediently walked behind her across the room. She was wearing a white blouse, tight soft leather short skirt, knee highs, stiletto-heeled boots. His cock stirred painfully in its cage as he watched her pert ass undulate in front of him You do look pretty in your nice pink bra. There are matching knickers for you to take home with you today. I expect that your plug is feeling quite loose by now. I’ll check that in a minute and see what size you need to use next.”

Then, he felt her inserting it into his now empty but stretched anus. “There, that should stay in better. Medically designed to stay put. You will find that you may need extra lube when you re-insert it but it will keep you just the right size for my requirements for a while. Now stand up, touch your toes and count the punishment strokes.” He struggled to his feet, feeling the new plug moving inside him, and bent to touch his toes. The swish of a crop came and he gurgled “Ummm” through the gag in his mouth as it slashed across his bare ass cheeks.

“I can’t hear you Fuck Toy” laughed his Mistress and continued the beating. He made as much noise as possible through the gag but the sound of the crop and his Mistress’s laughter drowned out all his attempts. With each stroke, he felt the plug moving inside him. After twenty strokes she stopped and walked in front of him. “Stand fuck toy!” He did so and she looked into his eyes. With her high-heeled boots on they were the same height. “Well, that was an extra ten for failing to count properly. Oh, of course, you are gagged. Oh, dear, never mind; I enjoyed punishing you so much.

His Cock Gets Released

That’s what’s important! Now kneel and put your forehead to my boots to say thank you.” He obeyed and stayed with his head at her feet until a pull on his leash lifted his head up. “Excellent, that is how a slave fuck toy should greet its Mistress. Make sure that you recognize me in the future or your punishments will get more severe. Now I don’t have much time tonight and I need to use you properly. Lie on your back on the bed.” He obeyed and as he laid back, she restrained his ankles and wrists with shackles that were hanging ready from the metal frame of the bed.

She pulled them tight so that he was slightly stretched and spread-eagled on the mattress. “Good, now let us release your poor cock. I hope you remembered to take the tablets.” He gurgled through the gag and nodded his head. “Good Fuck Toy!” He heard a click and felt the cage being removed from his penis. It slowly started to stiffen as Mistress’s gentle fingers teased it out of the restraint. He felt some sort of cream being rubbed into his cock and balls and quickly became erect. 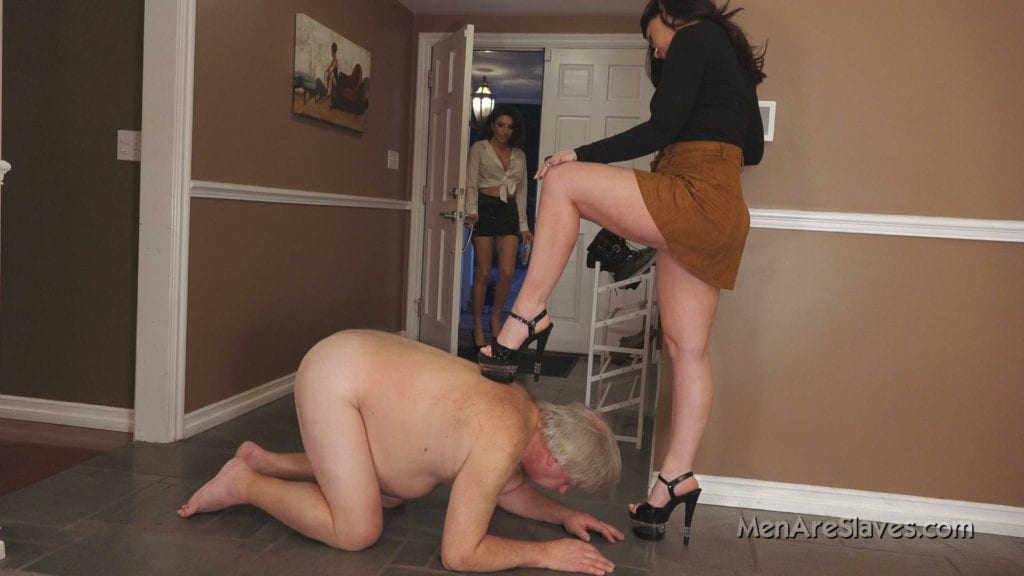 She Enjoys His Rubber Covered Dick

“Oh excellent, you are nice and full of milk. I’ll just tie a pretty ribbon around those big balls, that will help Fuck Toy stay hard for Mistress.” He felt something being tied around his cock and balls, separating the testicles and restricting the base of his cock. It was quite tight and then he felt what could only be a condom being smoothed down his stiff prick.“No time for Fuck Toy to clean Mistress out tonight I am afraid, and I need to keep you to stay hard as long as necessary. Remember you are not allowed to cum until Mistress tells you to.”

She stood over him on the bed and he saw that she had removed her skirt. Her stockings and suspenders framed her neatly trimmed pussy, already moist and shiny with anticipation and she lowered herself onto his body across his legs. Taking his rubber-covered dick in one hand she started to rub it against her clitoris, teasing her cunt with the tip of his stiff prick. He could see her other hand playing with a nipple through the thin fabric of her skimpy bra, her lips were parted below her mask, and her breathing was getting erratic as she became more aroused.

His Excitement Rises As She Teases Him

She inched forward on his body and inserted the end of his cock into her now dripping pussy until he could feel her muscles gripping the head of it. Her hands moved to his nipples, exposed by his bra, and started to pinch and tweak at them. His body arched with arousal and she giggled. “You little fuck toy slut. I know how to keep you excited now.” She reached into her blouse pocket and took out a little red silk bag. She shook out the contents onto his bare stomach. It was two nipple clamps and a long fine chain. She clamped one to each nipple and then passed the chain between them.

“Now I only need one hand to stimulate your little titties while the other one guides my big warm dildo.” She slipped back off his prick and took it in her hand again to play with her clitoris. He could feel his climax rising through his body as she teased her clitoris and pussy, pulling on his nipples from time to time and starting to moan with pleasure. He could feel her juices dripping down his legs and biting into the gag in his efforts to control his body. Two weeks without release were giving him blue balls but he knew that he didn’t want any more punishment on his already sore backside.

The Maids Have Their Way With Him

Perhaps I’ll let them use you while since you are still stiff, after all, you need to get used to being a fuck toy. From now on you will wear your pretty new bra and panties every day, all day. I will be checking up on you and you know what will happen if you disobey me. Bye for now, see you soon.” She slipped her skirt back on and he heard her heels as she left the room.

A few minutes passed and he heard steps approaching. The trainer’s voice spoke. “Ladies, clean Fuck Toy clean and you may play with him. Mouths only today though, neither of you have earned a pussy filling.” He felt hands on his genitals, the condom and ribbon were removed and two mouths started to lick and caress his cock and balls. To his surprise, not only did he stay hard but was brought to another climax. He heard the trainer who had been watching the whole time speak up.

“Lucky girls… those little pills are very efficient and the Mistress left you to have a real treat today.” The maids sucked and licked his cock until at last it subsided and then he felt the cage being replaced and heard the click of the lock closing. He was released from the bed and the hood removed. The trainer handed him a pair of lacy pink panties which he put on and the two maids escorted him back to the door to the changing cubicle. “See you soon,” said the trainer “and remember your underwear. It will need to be washed every evening so it is nice and fresh for the next day. Enjoy!”