A Strip Tease for my Demanding Mistress Fiona – Part 1

To complete her site with videos, my demanding Mistress Fiona had a scenario idea.

She had warned me earlier in the week, on Sunday we would shoot a video. Be there at 9 pm she told me. I’m happy, Mistress Audrey from Florida is in PARIS for a few days. As always when Mistress Audrey is in the capital, they take advantage of this stay to shoot videos or do a new series of pictures.

I understand the video will be published on both sites. I will be the only slave in the center of the scenario at the mercy of my two dominatrixes. Being designated for the role is a distinction that I did not refuse. Besides, do I have a choice? I know what’s waiting for me, undergo the wrath of the two demanding mistresses without flinching. 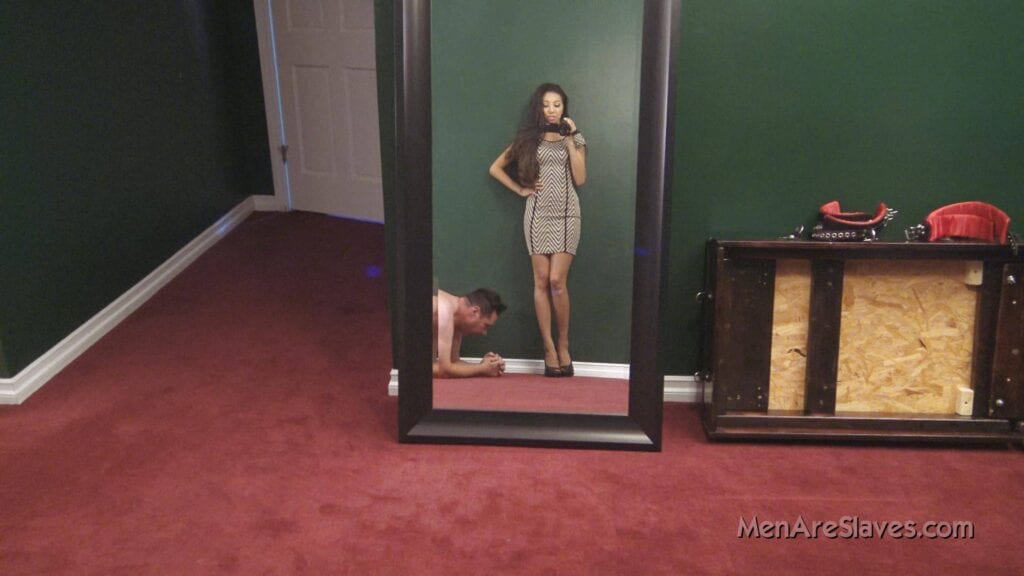 The video must be impeccable, usually, we film for 1 hour, and we only stop to change clothes, or to move an accessory. While the camera is rolling you have to try hard to resist. The video is ruthless compared to the photo series that allows a possible break. The video does not allow a pause, otherwise one sees the cut while watching the video. The pause, it will take a few seconds when we pass from the bench to the cross crossing.

It is necessary to be in shape, Saturday evening in bed early, the alarm will sound at 7 o’clock. Contrary to the majority of France, this Sunday, no sleepy morning under the duvet. On the contrary, rise early and why?

The Life of a Slave is to Serve a demanding Mistress

To undergo punishments, humiliations, and to work all day. I will not be back until 8 pm. But here I am, I am a slave, it is the will of the Mistresses, and I assume my status happily. To give them pleasure, I will give myself pleasure thoroughly. They want to put quality video’s on their site, and I will give them the best of myself. And all this while the majority of French will be lazy, go to the restaurant, to the cinema, and I will be slaving and take a beating.

But sacrificing a Sunday for the pleasure of the dominators, for their needs is part of the game of submission. When one is really subjected, one gives their time.

On My way to Shoot the Video

I calculated my time, I left for the subway station a quarter of an hour before the fateful hour. I phoned Mistress Fiona to ask if I need to make any purchases along the way. According to her orders, I buy the bread, some fruit and here I am before the door of the dungeon. At the thought of what is waiting for me, I have a pit in my stomach, my breathing accelerates, but I assume the position and press my finger on the bell.

The door opens, I say hello Mistress in a strangled voice, Mistress Fiona does not answer, it’s normal, a Mistress never says hello to a submissive or a slave. But when I see her smile I know she is pleased with my presence. Mistress sketched a smile. The slave is present the video will take place as expected. I say hello to the photographer who had already arrived.

I put my purchases on the kitchen counter, the sink was full of dishes. This is also normal, a Mistress does not lower herself to do these low tasks, and she does not have a dishwasher. The slaves are there for that. Without losing time, I set to work.

While I work on cleaning the dishes, Mistress Fiona tells me the scenario.

I will take the name of Ernestine, a young girl coming to take advice from the mistresses to become a cabaret dancer, learn to walk like a bluebell girl, to dance to the rhythm of the music in a sensual way by waddling the posterior. Removing the clothes slowly, languorously to the rhythm of the music. When I remove the bra, the false breasts will fall to the ground and reveal that I am a boy disguised as a girl. The Mistresses, then furious at having been duped, will make me undergo an ugly punishment.

She ends by asking if it suits me. I simply say yes. So we won’t change anything. If, for example, at a point, I would have a problem with or gives me anxiety. If it would appear difficult to achieve, a change could be made. She has already discussed the script with Mistress Audrey and the photographer, developed the technical details, only missed my opinion.

When the dishes are finished, I go to the dungeon, while the photographer installs his appliances, I clean the accessories, wax the leather, pass the latex product on the latex combinations. There better not be a grain of dust that everything shines. Everything must be impeccable, must shine for the video to be better.

Time to get Dressed

It’s time to get dressed. I’m dressed first. Mistress Fiona has a large number of outfits, latex masks with make-up faces. I remove my men’s clothing until completely naked. Dedicated and experienced hands wrap my legs with pink stockings, on top of me a white petticoat full of frustrated frills, add in the fake breasts, I’m entitled to big breasts.

The sides are filled with fabric, these fake breasts were hidden by a lace bra. I am entitled to pink leggings with fine heels of about 10 centimeters. Finally comes a robe in pink satin. Already I feel like a woman but with an uncertain gait, I have no right to touch anything as to avoid dirtying the white satin gloves.

I placed the latex hood on, so now I breathe with a little difficulty through the small mouth of the mask representing a smiling face. The mouth of the mask is just about closed, the holes of the eyes and nose are very small, so my field of vision is the most restricted.

The wig goes on to complete the transformation of the metamorphosis. I have no right to sit down so as not to wrinkle the dress. So I am condemned to stand on my heels sharp while the mistresses put on their clothes, their leggings, tighten their corsets, adjust their makeup. That time seems long, as I am eager to shoot.

At last, the snapping of their heels approaches me, I hear “Are you ready? Let’s go!”

Music playing and then action. I go forward, reprimand, I walk without hesitation, they showed me how I have to waddle. While with the mask I see virtually nothing, I have to start again.

Walk to the camera, but where is it? Ah, I finally distinguished it.

I’m the actress in the spotlight, but it’s hard to be an actress for a boy who has not prepared for the role?

If only I had been told about the scenario earlier, at least I could have trained at home in front of the mirror. But I know the Mistresses, they are players, they did not warn me in advance precisely so that I am trained there in front of the camera. To complicate this, I must now halt, lift the dress and the petticoat at the same time, (not easy to hold it all in my hands with all the fabric).

Put on a Show

To show my butt I have to walk as far as possible from the camera. I have to start with a natural and sensual gesture. First to show my buttocks to the Mistresses, to turn over and start again in front of the camera. That’s what the users who will watch the video will see. The same spectacle as the Mistresses enjoy. And all this by following the music. It’s hard, but I’ll get it.

And now that I feel comfortable in the role, that’s where the order comes to start the striptease. Still waddling my posterior to the sound of music I have to remove the dress with a sensual gesture, but now, the difficulty is opening the zipper in the back. With these fingers covered with satin, the exercise is difficult.

At last, the dress falls to my feet, I must pick it up and throw it away as if we were in public. Undoing the bra is also difficult. When the false breasts fall to the ground, the music stops abruptly, a voice cries “punishment time”.

A Strip Tease for my Demanding Mistress Fiona – Part 2