Tony, A Submissive In The Bedroom

Tony was really enjoying the party… It was his type of crowd: established, laid back, senior professionals. Tony was a superstar in the investment bank division of a medium size brokerage firm enjoying life to the fullest together with a gorgeous wife to boot. His wife made is life complete. In his everyday life, he was forced to always be in control, in charge and barking orders to others.

What started out as a playful, drunken camping experience with Jayne had grown into a 35 year marriage and a very well hidden D/s relationship. She enjoyed controlling his private behavior and he enjoyed giving up control despite the fact that she could not give him the one thing he wanted…..to be punished.

A Secret Rendez-Vous With Jayne

Jayne had a personality much better suited to be with a submissive who’d obey without needing to be physically disciplined, but the rest of the relationship worked so well, she did not want anything to change. Both were having the time of their lives, even though Tony’s ability to exploit her weakness allowed him to get away with more than he should. Sitting across a spacious living room, they caught each other’s eyes and she motioned with her eyes off to the side. Tony excused himself from the conversation he was having and rose to meet her.

Jayne took his hand and whispered into his ear: “There is a surprise here in this house… Come with me.” She led him to another part of the house and into the basement, where to his amazement, Tony saw a very well equipped play dungeon! Bondage equipment lying around, attachment points on the ceiling, walls, and wall columns  together with an elaborate looking device in the center of the room. There was even a stocked bar in the far side of the room. Jayne turned to him, and said “this house belongs to a friend of mine from the gym, who’s very much into the “lifestyle” too. She gave me permission to play here, so strip – let’s play!”

Tony Get Tied Up

Tony was speechless for a second, but he always enjoyed the surprise nature of their D/s relationship. Looking back worryingly towards the stairs, he shot a questioning look at Jayne. She smiled, “Don’t worry, the door locks from the inside, we won’t be disturbed.” Tony took off his clothes, as Jayne looked approvingly on. Once he was naked, she motioned him to the device in the center of the room. It was a bondage stock, designed to hold a person on all fours, using straps at the ankles, wrists, and a rod connected to a collar which held the neck still.

Elevated for access, padded with soft leather, it looked very comfortable, yet was totally functional: despite the small number of actual straps, once locked in, Tony found that he wasn’t able to move more than a couple of inches in any direction, his ass was in the air, head and back tilted at a slightly down ward angle, knees about two feet apart. Jayne playfully ran her fingertips along his naked back, bent down, and whispered directly into his ear: “Sonja will be down in few minutes to play with you. She has my permission. I’ll see you later,” then abruptly straightened up and walked out of the room, flicking the lights off on the way out. 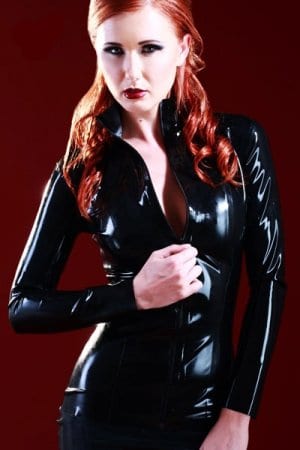 Tony, still totally shocked with the turn of events found himself wondering what this was about. Their relationship was exclusive, neither wanted to swing, neither wanted to add any other sexual partners. And who was “Sonja”? Their relationship was strictly secret, he most certainly did not want to spread that knowledge around. He would soon find out what a sadistic mistress she was.  After some time which was impossible for Tony to judge accurately (being all tied up in a dark room), the door opened and the lights came on.

A woman whom Tony recognized from also being in the party walked in, closed the door behind her, and locked it. Walking straight up to him, she stood in front of his face, and spoke in a calm, friendly voice: “Hi Tony. My name is Sonja. Your beautiful wife asked me to do to you what she herself doesn’t feel comfortable doing.” “What would that be,” he asked. “Punish you,” she said laughing, her tone light and friendly. Not taking this very seriously, Tony replied in the same tone: “Why and how would you do that?”

Punishment Comes In Many Forms

Sonja scolded him: “Why? Because you exploit her weakness and her fear of “hurting” you too much. I on the other hand have no such problems – I won’t injure you permanently, but now it is my task to hurt you. In fact, the whole point of this is to hurt you so much that you will be too afraid to come back here anytime soon. If I do it right, Jayne won’t need to discipline you – she’ll just remind you of me, and that will do the job. How? You’ll soon find out.”

Tony enjoyed playing the bratty submissive in the bedroom with Jayne, but she could never inflict too much pain on him or be involve in any S&M sessions. He did agree to let himself be subject to Jayne’s discipline, as she saw fit, but that was only after he already realized she didn’t have it in her to really discipline him. Certainly not in an extremely painful way. This situation was something which he had not anticipated, but strictly speaking, the situation WAS within the bounds and limits of what he and Jayne agreed to.

Walking behind him, Sonja, the sadistic mistress spoke, “I see Jayne forgot to do something, let me remedy that.” Tony felt fingers around his ball sack and felt something cool spread over it, then something tight wrapped or put around his balls… “it’s an electrical device to provide electro shocks to your balls and I spread conductive gel all around them too to maximize the contact area,” Sonja’s voice informed him. “Do you see that little switch on the little table in front of you? That controls the current; I’ve set it to full, no need to control the intensity – it’s a simple on/off thing.”

Moving around again, Sonja the sadistic mistress, started to bring out various toys and laying them in a straight line on the table in front of Tony’s face… As she was laying them down, she was counting them off: “1 – cane… 2 – crop... 3 – whip… 4 – flogger… 5 – wooden paddle… 6 – leather paddle... ” Finally the sadistic mistress pulled out a pair of dice from somewhere and put them in her hand, just in front of Tony’s mouth. “This is what we’re going to do – you will roll the dice, the smaller number will be the instrument and the other will be the number of strokes. Open up!”

Sonya barked in a voice Tony was much more used to using than being on the receiving end of and his natural stubbornness caused him to recoil from her hand. As soon as she saw he wasn’t going to open his mouth, Sonja flipped the switch on. The sensation in his balls was unlike anything Tony had ever experienced! The pain was beyond belief, intense, reminiscent of someone simultaneously crushing, punching, and kicking his sensitive genitals, while dipped them in boiling water!!

There was no attempt on his part to control his voice, Tony started to scream in pain. Turning to Sonja he saw her casually walk over to the bar  and start pouring herself a drink. “PLEEEEEEEEEAAAAASSSSSSEEEEEEEEEEEE!!!” was the most coherent thing Tony was able to say, “Please stop!!!!!” But Sonja casually poured herself a drink, put a few ice cubes in, sipped it and added a lemon slice before slowly walking back to him. Tony was screaming the whole time.

The Sadistic Mistress Continues Her Punishment

Sonja put the glass down and flipped the switch off. The shock of the pain disappearing was just as intense as it was when it started but much more welcomed, his body went limp, breathing deeply, sobbing. Tony looked at Sonja, the sadistic mistress, with a combination of fear and hate in his eyes. “You see, Tony, ” she started to say, “this is what I mean. I’m here to punish you, to hurt you, that’s all… I don’t care about you, I just want to hear you scream and beg, in as many ways as possible. That’s what I get off on.”

She then made a sudden move towards the switch and Tony started to scream again, only to realize that she was reaching for her glass. With a fearful glaze, he looked up at her and noticed her amused gaze aiming down at him. He then realized that this was planned. She put down the drink on purpose near the switch to see how he’d react!
“Ok, you have seen enough” as Sonya reached for a blindfold. The sadistic mistress followed with, “and if you scream too much, I will silence that as well. Nothing excites me more than the muffled screams from a mouth stuffed with a plug and taped shut.” But she still needed Tony’s mouth for the time being.

“Let’s play!” offering the dice on her open palm while moving her hand near his lips. Without any hesitation, Tony quickly reached down and put the dice into his mouth. “Ok, spit them out,” Sonja ordered while sipping on her drink. Opening his mouth, the dice fell out and landed on the table below in front of his face. ” Ohh, a 3 and a 5. That’s 5 strokes with the whip.”