The Reluctant Mistress and Her Unexpected Transition Part 2

Monday afternoon, I texted Danny a little before five p.m., just before his shift ended. The text was intentionally cryptic, “meet me” from your mistress, followed by the address of the local Tractor Supply Co. store, which is a country living store that carries just about everything imaginable, under headings like “Farm & Ranch,” “Home & Garden,” Trucks & Trailers” and “Pets & Livestock.”

It was the latter category that had caught my eye during an on-line search. To wit, I was thinking about purchasing “The Retriever Single Door Dog Crate,” a steel wire crate for pets over 70 pounds. It was just over 48 inches long, 30 inches wide, and 32 inches tall, which might serve as an adequate cage for my guy but I wanted to take a look before making the $89 investment.

Meeting at a local store to buy some new toys and…

Danny’s sun-faded blue Ford F-100 pickup truck was parked in front of the store when I pulled up. He got out and waved as I pulled up. I turned off the engine, released my seatbelt, and sat behind the wheel, the car speakers still playing Pandora (I know, I know, Spotify is better but I’m too lazy to switch). I waited for him to notice that I was not getting out. Eventually, he came around and looked inquiringly through the window. I rolled it down.

His face blanched. He looked crestfallen, then his features took on a genuinely contrite expression. He stuttered an apology as he opened the door, “Sorry, Vanessa.”

As we walked into the store, it struck me that Danny was not prepared for this; he was several moves behind. It was obvious that he had never really thought through what a smart girl like me might do with the reigns to a cute guy like him. Just as well, since I was winging it; one move ahead was all I needed.

I had him grab a shopping cart and instructed him to follow me. We walked down every aisle. When I saw something I thought might be useful (rope, snap links, screw-eyes, chain, a roll of wire, miniature padlocks, wooden paint stirring sticks, duct tape, dog collar), I dropped the item in our basket.

…A pet cage to reinforce his new submissive role! 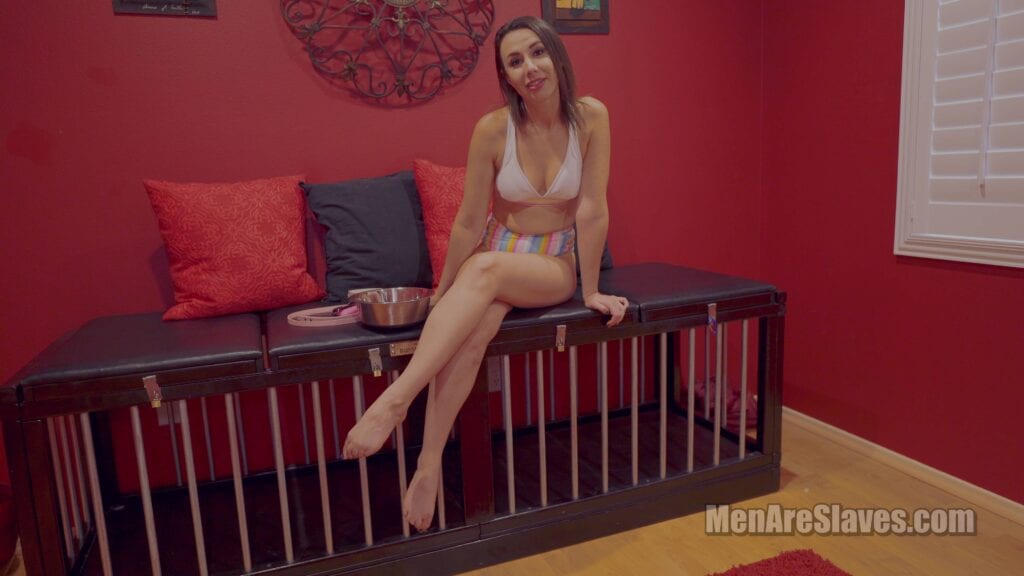 Danny eyed my selections with a growing bulge in his crotch. He followed obediently. I saw a nice pair of size-7 women’s leather field boots and tried them on. They fit, so into the basket they went. No riding crops, but there was always the paint stick if my hand got sore.

Eventually, we arrived at the pet cages, stacks of them against a store sidewall. The biggest one looked just large enough. I checked the tag to make sure it was the same one I had found, reported in stock during my on-line search.

I took a deep breath and said to my love,

His eyes darted up and down the aisles. Clearly, he was panicked that someone might see him crawl on his hands and knees into the cage. Who would do that? (Obvious answer: only a submissive.)

I ask him to try the dog crate to see if he fits in!

Then, I crossed my arms. I was still wearing my office power suit—knit jacket, knee-high skirt, hose, pumps with two-inch heels, a square-cut, white silk blouse that revealed just a shadow of cleavage (all I possessed). I tapped afoot for effect.

My boy opened the cage door, did a quick lookup the aisle, waited until a woman with two children moved out of sight, then swiftly got down on his hands and knees and crawled in. He was so rattled that it didn’t occur to him to turn around and back in, so his rear stuck out the wire door.

I loved the sight of his pert tush in tight blue jeans, but still, I had to suppress the urge to laugh. Clearly, he would fit in the cage, if only barely. It would be uncomfortable; he had to kneel, no lying down. Perfect.

I almost felt sorry for him, but he asked for this.

He backed out as fast as he could and hastily stood up. I stepped into him, pressing my body to his, taking his finely boned jaw in my hand. I murmured,

I gave him a sensuous brush of his lips with my own.

At the check-out counter, I made him pay for everything.

Back home to assemble the dog crate in the empty bedroom

Danny followed me home. I live in the older part of town in one of those cute row houses built in the 1930s that stands tall and narrow. It features a wet basement, a dry main floor with a small master bedroom, a cozy kitchen (no dishwasher), and a dining room connected to a fairly spacious living room. A covered porch out front. Adjacent to the kitchen, a steep flight of stairs leads up to two small bedrooms on the second floor. I use one for sewing (I make most of my clothes). The other room is empty but has a thick blue carpet. Here I set up a queen-sized Aerobed for guests. This room has a dormer window that looks out on the street, a tall closet with a single clothes rod, a storage shelf above it, and a small cubby with a door to the attic, where cardboard boxes rest on plywood sheets nailed to the rafters.

I had Danny assemble the dog crate in the empty bedroom. It seemed a little flimsy so I had him wrap steel wire (women’s intuition to buy the wire; aren’t we geniuses?) around every seam and corner, and tie off the free end with a twist like I’d seen him do safety wire on critical nut and bolts. While he worked, I went downstairs to change into a pair of capris and a sexy halter, meaning my nipples showed through the fabric. Not dominatrix leather garb, but it would have to do. Upstairs, Danny had finished. He stood awkwardly next to the cage, pliers in hand. I took the pliers, gave him a lingering embrace, and then whispered in his ear,

“Get on your hands and knees and back yourself into the cage, Danny.”!

Danny stripped, trembling. His dick popped out like a pole when he tugged down his underwear.

He stood there, seemingly confused about what to do. A suddenly stupid sub, it seemed.

He got down and backed in until his toes touched the rear wall of the cage, just enough room on all fours to close the wire door about six inches from his face. From the shopping bag, I fished out two mini padlocks and locked them around the vertical wires that formed the edges of the gate. 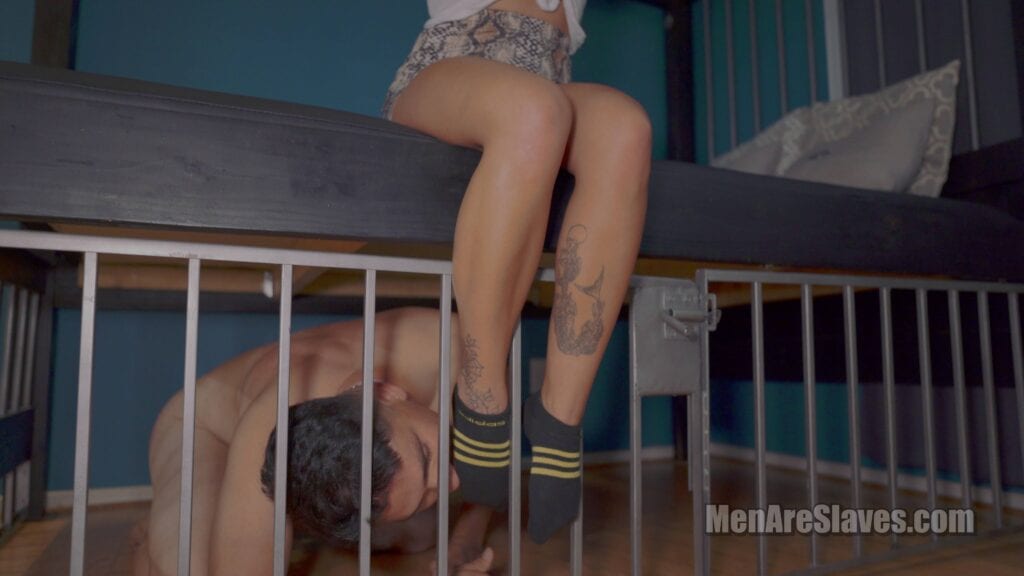 Confined inside his cage as punishment for his bad behavior towards his Mistress, me!

I rattled the padlocks, making sure there was no way he could open the gate. I examined each of the corners and the seams where the wire panels joined. Danny had wired them thoroughly; no way it was ever coming apart; he was locked in for the duration. I had read that subs can’t help themselves when they are locked up; they are compelled to try to escape. If they can’t, into subspace they go.

Last instructions before I left him alone!

God, he looked cute in there. I wanted to climb inside and jerk him off. But no room for that, barely room for him.

I had told him that I would be checking on him to reassure him, but now a sexy idea occurred to me.

From the look on Danny’s face, I knew I had hit a button: subspace.

Another idea. I bent over, slipping my halter off the shoulders so that the areolas and my nipples became exposed. Then, I taunted,

Calling Danny “slave” seemed remarkably natural, a term of endearment, a variation on “pet.” When you have your man in a cage, I guess you can call him what you like.

I could see the longing in his eyes; he was imagining sucking on my nipples. Danny once confessed that he preferred small breasts. Mine was a 32C. I had always been a bit self-conscious about their size until Danny. He liked me to wear bras, not because I needed them but for effect.

The Official Spanking Center in a femdoming society

Femdoming Ideas For Your sissy husband (2)