He’s All Tied Up – Milking machine

He came into town from abroad on a Wednesday. Little did he know, he would not be leaving anytime soon. As the plane landed, Mistress Victoria was making preparations. The house was immaculate. Two glasses and a bottle of champagne on ice sat on the glass coffee table in front of the plush white sofa. She stood in front of a full-length mirror, admiring her reflection. The workouts had paid off and her body felt lean, strong, and toned. An expensive black silky slip dress graced her sinuous curves with ease. She smoothed her dark glossy hair into a sleek ponytail with red lacquered nails. She slipped on the sky-high patent pumps with the cutout peep toe. Her sheer nylons gleamed in the candlelight. Walking over to her vanity, she picked up her favorite YSL red lipstick and carefully applied it to emphasize her sultry pout. She added some black liner to bring out her already dark and mysterious eyes. Just a light mist of fragrance and she headed out to wait for him. Sitting on the divan, long legs crossed, she was the epitome of elegance.

A Visit to Mistress Victoria, the only one who controls him! 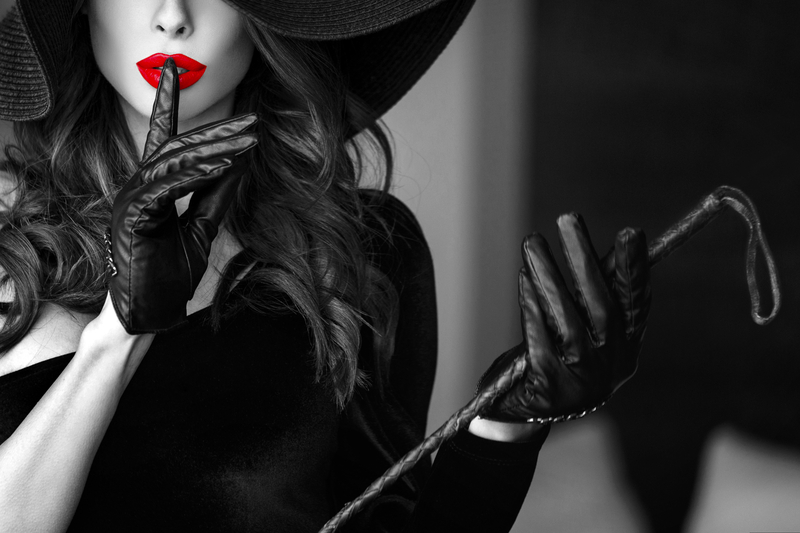 The buzzer rang, and she motioned the sensor to open the front entry. She spoke into the air,

He entered the ultra-modern elevator, which automatically headed to the penthouse suite. Checking his reflection in the mirrored wall, he admired his Italian suit and brushed back his hair from his eyes. The trip had been long, but he had a rush of adrenaline, knowing he was about to pay a long-overdue visit to his Mistress. Mistress Victoria. The only one who controlled him. Mind, body, and soul.

The elevator swiftly approached its destination, and the doors silently parted, revealing an intimate lobby area. As he entered, his heart started to beat more quickly as he heard the clicking of heels on the marble floor approaching from afar. He dropped his carry-on bag to the floor as her curvaceous silhouette appeared in the doorway. Long hair over one eye and red lips shining. The classic femme fatale. He felt his knees buckling. Her intense stare met his eyes, and no words needed to be spoken. Mistress Victoria turned around, and he followed her, mesmerized by her tiny waist and soft round hips swaying in the silky dress. Her high heels beckoning him closer.

A special surprise for him! 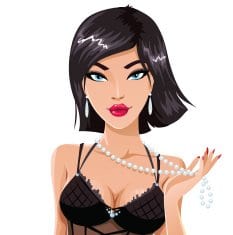 He reached over to lift the champagne bottle out of the bucket and expertly opened it, pouring two glasses. She smiled like a Cheshire cat. He lifted a glass to her perfect lips, and she parted them just slightly to take a sip. He felt his cock stiffen in his pants. His heart was racing with anticipation.

Mistress Victoria touched the pearl choker around her neck with a long red fingernail, playing with the beads in a very sensual way. He watched and offered her another sip of champagne.

She slid her hand down to land on his thigh. With firm, but gentle pressure, she slid her fingers slowly upward, until she was pushing in on his hard cock. She moved her hand up and down in a slow-motion, and then gently squeezed his balls. He leaned back on the sofa and let out a soft moan.

With that, she got up and walked around the back of the sofa, and leaned over to whisper into his ear.

She turned to walk, and he got up and followed her. They passed by the vast modern kitchen, and headed down a long corridor, passing a few doors, until they reached a large set of double doors at the very end. She pushed a glass panel next to the entrance, which slid open to reveal a massive boudoir with a giant luxurious burgundy satin-wrapped bed in the center. From the ceiling to the bed hung a set of black velvet ropes and black leather tethers to each of the four corners. She walked to the foot of the bed and turned around to face him.

Firmly attached to the bed by Mistress Victoria

Mistress Victoria stood there and watched as he obediently undressed, tossing his fine suit over a plush velvet chair and placing the rest of his personal items, including his cell phone, in a small box on a table.

She smiled and seemed to approve of what she saw. He felt the plush carpet under his feet as he headed over to the bed. Climbing on, he laid on his back. She walked around and pulled his arms above his head, and then positioned his legs to spread the eagle. Reaching up with ease, she pulled down the tethers, which were on a complex system of pulleys.

She slipped the loops around each ankle and tied them to a rung under the bed. Then she followed and tied his arms as well. He was gently, yet firmly attached to the bed. Entirely exposed, he felt his cock stand at attention. She leaned over and touched the head of his cock with a soft leather strap. He moaned.

She laughed momentarily and then got suddenly serious.

With that, she walked over, and took a small rubber ball gag, and wrapped it around his face, stuffing the ball deep into his mouth. He watcher her eyes glitter in the low light. He felt his heart pounding. She took a small apparatus and slipped it over his stiff cock. It was a cage that snuggled just tightly enough to enhance his hard-on. She turned up the music and started to sway in front of him, her hair moving and dress shimmering as she let it drop to the floor.

No escape for Him!

As the dress fell, it revealed a sheer black bodysuit with strategic cutouts. Her nipples popped through small holes, looking hard and perky.

Also, her pussy was plump and pushed gently through the opening between the legs. Her thigh highs stayed on and she was still wearing the patent stilettos. She danced and turned around slowly to the music as he watched her with anticipation. She gently climbed onto the bed so that she stood above him. Gripping two hanging rings to position herself directly over his torso, she began to lightly swing so that her legs were spread over his face. She slid her limber and supple body down, going into a seamless split over his head.

He watched as her glistening pussy approached his face. At the perfect moment, she reached down and pulled out the ball gag, replacing it with her wet pussy, with she started to grind into his face. She moaned with pleasure, and he thrust his tongue deep inside of her, tasting her exquisite nectar. Then, she kept her grip on the hoops above and intermittently lifted her body up, giving him air and keeping herself on edge. Mistress Victoria cried out with pleasure until she dropped onto his face, pressing all of her 115 pounds, cumming with abandon, while he sucked and licked and thrust his hips madly with desire. She fell limp for a few minutes after, spent with pleasure. Slowly, she pulled herself back up, and replaced his ball gag, tying it tightly around his head to be sure there was no escape.

Fear and excitement at the sight of her strap-on!

His senses were overcome and his cock was pulsating. He could feel the surge of cum wanting to explode. She climbed off of the bed and reached down to remove the cage from his swollen cock, and she replaced it with a small milking device, which she set on a low speed. With that, she turned and walked out of the room. He heard the water running and he knew she had gone to take a shower. In the meantime, he waited for what seemed like an eternity. He felt intoxicated with her taste and scent. He wanted to release, but every time he got to the edge, the milking machine would pause then restart. The agony and the ecstasy were real. He moaned and begged through the ball gag.

Finally, she emerged from the bathroom, in an all-white silk robe, tied tightly around her waist. As she approached, he noticed something slipping out from the slit in the front of the robe. Mistress Victoria reached the side of the bed, and moved her hand down to part the robe, revealing a strap-on. It was medium-sized, shiny, and black with detailed veins and head.

His eyes widened with fear and excitement. She smiled and started to stroke it, as she poured lube over the head and slid her lovely hand up and down, and up and down. Then, she stepped closer to him and pulled his head towards her with her free hand. She got on the bed on her knees, facing him, and just as she grabbed the ball gag from his mouth, she slid the black shiny wet cock between his lips and told him,

Then, a combination of humiliation and extreme excitement!

After what seemed like an eternity, she paused. She told him,

With that, she undid his tethers and told him to turn over. Obediently, he turned over to lay on his stomach. She grazed his ass with her hand and slapped it hard. Suddenly he felt her pulling his body so that his ass was on the edge of the bed and his arms were spread above. She tied his arms tightly. He kneeled on the floor, ass up. She stepped behind him and she felt him caressing his cheeks, sliding a long finger up into his crack and teasing his asshole. She slipped it in and out, pouring more lube, so that it slid in and out, faster and faster, with ease. He moaned. He heard her pouring more lube and then she pressed the head of the black dildo against him, so that it slid up and down his ass crack, up and down and up and down, until she began to push ever so slowly.

He moaned and felt his cock swelling and pulsating against the silk sheets. She gripped his ass cheeks as she thrust deeper and deeper. She leaned over and whispered in his ear,

With that, he let out a yell and exploded with tremors while she thrust deep one last time. She pulled out and left him shuddering on the bed. He collapsed in a daze. Again, she left the room to shower, and he listened to the water run until he passed out with exhaustion. Still tied up tightly, he dreamed of what would happen next. 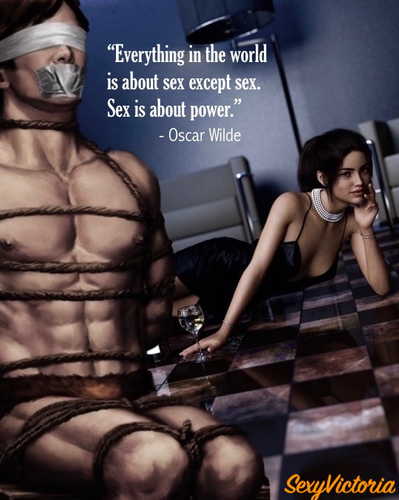 A Strip Tease for my Demanding Mistress Fiona – Part 2

The Journey Of A Submale Slave(1)

2 thoughts on “He’s All Tied Up – Milking machine”