I only served my Femdom Mistress for a few months, but during that time She taught me many things and involved me in some of Her and Her Friends’ games. Our routine was when I visited Her, I was to strip naked as soon as I entered Her house and wait by the door. She would then call me to Her and I would kneel at Her feet while She fitted me with a  collar and leash. Sometimes She would play with me, others times She would force me over Her lap and spank me with one of Her toys. I was always fitted with a butt plug, either a hidden one or one with a tail or handle for Her to pull on. She also had a remote shock-fitted cock ring which allowed Her to punish me or call me to Her whenever She wished. 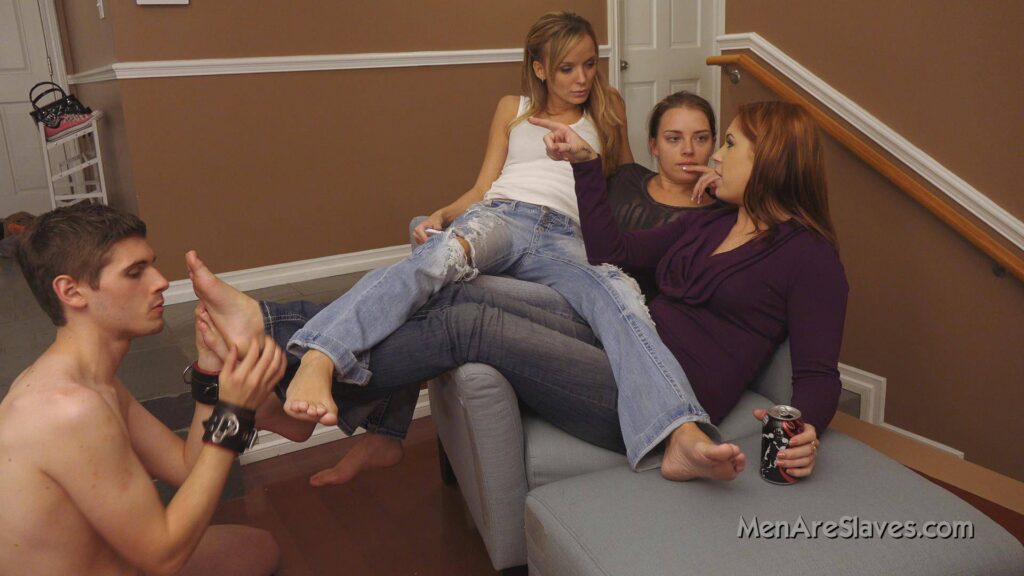 On two occasions when She was busy, She lent me to Her Friend where I was used in a different way. She made me strip and then fitted a collar and chest harness. I was then made to bend over a chair and was fucked straight away with Her strap on. The shame and pain I felt were intoxicating. I was allowed to experience it several more times during Her ownership of me.  While I was being fucked the doorbell rang.

Shemales Have Their Way With The Slave

She told me to answer the door and stand there naked in the doorway. She then said I was to do whatever I was told, without question! I opened the door and two girls stood there. Without a word one of them grabbed me by my collar and dragged me into the hall. The other girl went behind me, put Her hand around my waist, and forced me to bend over.

The other “girl” then lifted Her skirt to reveal an erect cock, which She shoved in my mouth. While She fucked my mouth, I felt something hard being pressed up against my arse and then entering me. I was being spit roasted by two Shemales !!! I didn’t know how to react but Mistress had told me to obey Her Friends as if They were Her. So, I had no choice but to do as I was told. When They had finished with me, They went into the lounge and I was left on the hall floor.

Movie Date with a Mistress Neighbor Without Permission