How to Manipulate A Male Into Being Your True Slave!

In this article, I will put you in the front seat and take you into a journey, a journey around my idea of how to take a submissive male, and step by step turn him into your true slave.

This journey is based on the fact that the male is a submissive, but not necessarily into the fetishes which I’ll describe.
It is written in a suggestive manner, take what you like, leave what you don’t, the general message is what’s important.

On the first date, a gentle tease, and denial, vanilla style!

Imagine you went on a date with a handsome male, which you interacted within one of those dating apps. You discussed a few of your common fetishes but decided to leave some mystery to the actual date.

He picks you up in his car, with flowers in his hands, he shows respect and that he is actually into you. Oh boy, he doesn’t know what you’re up to. You like him and see the potential. You order from the menu, talk, flirt, look in his eyes, do all that is necessary to get him where you want him. He drives you home, eager to go inside with you, wishing for a happy ending. But you prefer to test his true motivations and take it slow, kissing him for a goodbye, telling him you’ll wait for his call tomorrow.

What did you just do? A gentle tease and denial, vanilla style. We all do it, it keeps the desire in a low flame but allows us to construct a relationship from it.

On the second date, explanations of what you expect from your true slave! 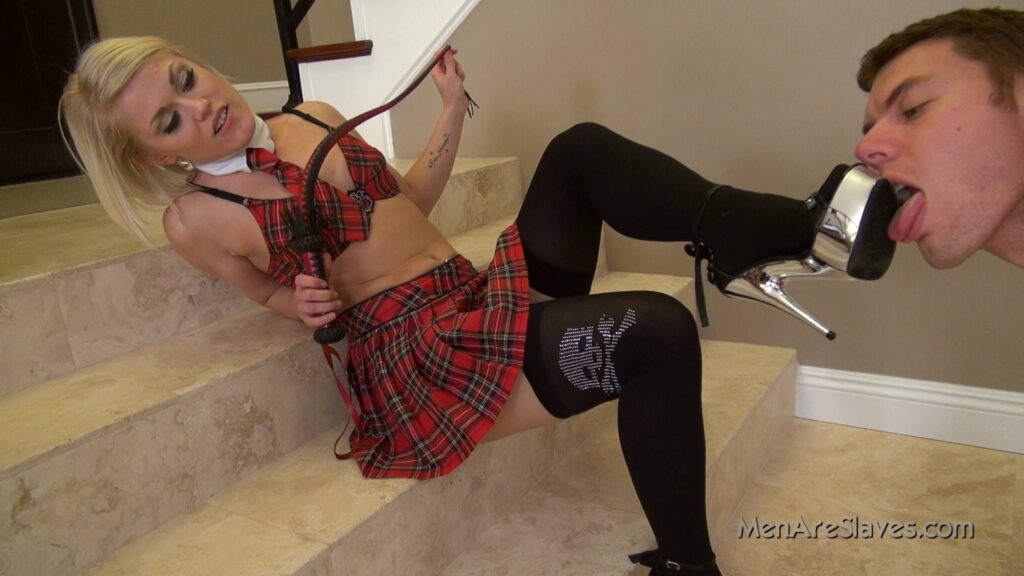 So you go out on a second date, you get closer, you explain what type of a submissive you like, your true knight which is always there for his princess.  Then you slowly offer what you want to do on the date, showing your preferences, your favorite ice-cream flavors, the pieces of clothes you like guys to dress in. That’s how you show him that you open up in front of him, but at the same time, you construct your preferences in his mind. When he gets you back home, you teach him to get out of the car, open and close doors for you, offer you a hand, all those manners which put you as his first priority.
You kiss him goodbye, give a sexy look or even a quick touch, and go home, leaving him teased for more.

While speaking with him, you get wet by yourself, thinking about all those things you’ll do to him, after all, you’ve waited quite a lot for this moment as well. He drives you home, opens the door for you, and you decide to take him home with you. He tries to make a move, but you’re telling him that you’re the one who makes the moves here.

The fourth date is a charm…

While telling him you like it kinky, you blindfold him and tie his hands, pushing him slowly on the bed. You start kissing him and taking his clothes off, whispering to him:

You establish your name as Mistress / Goddess or just My Lady. You tease him and say that you’ve waited three long dates to test his tongue skills, which is mandatory for any future progress. He goes down on you, you give him a “not so bad” after climaxing, telling him that he will have another chance on the next date, untie him, and send him home unsatisfied.

The fourth date is a charm, he learns quickly, takes you where you want, knowing all your preferences by heart, and if not, you let him know how unpleased you are about it. You get to your home, to the same position, blindfolded and tied up, gets down on you properly, and you ask him if he knows what edging is, and you’re playing “red light, green light” – when you say “green” he is allowed to rub his dick when you say “red” he has to stop. Then, you have him kneel in front of you, he is super compliant in that stage, but is eager to cum. You keep denying him, saying “red”, and order him to beg you for a release. You explain that it turns you on to see a strong male like him begging, putting you in such a powerful position.

The fifth date is the tricky one…

When you’re satisfied with his begging, you stand up, telling him that his lips should be put to good use, and order him to kiss your ass. You let him climax, while kissing, seeing that he tried not to get you dirty with his filth.

He thanks you, and goes home.

The fifth date is the tricky one, he sort of got what he wanted, and the relationship has gone so well so far, yet he might feel that orgasm on his knees isn’t worth all his effort. So before the date, you tell him that you really enjoyed last time, and you focus more on him, his desires, fantasies, etc. This information will be your leverage in the future, a means to wrap him around your finger. Then you ask him if knows what chastity is and if he has ever tried a chastity device.

What did I get my Cock into?! Bound to a Leather Clad Bench

1 thought on “How to Manipulate A Male Into Being Your True Slave!”