How to have oral sex

Our Intrigue with Oral Sex

Muff diving, eating someone out, going down, poon job …The slang terms and euphemisms for oral sex on a female are very creative, often quite comical, and — in the very least — numerous. They speak volumes as to the obsession we humans have with the mouth going South when fooling around with a partner. Google oral sex and 12,300,000 pages come up for that term alone. People around the world are intrigued with the eroticism involved in giving the genitals a slip of the tongue and more. To say we’re orally fixated is an understatement.

Just So We’re on the Same Page . . . Performing oral sex is a universal sexual experience enjoyed by millions as a part of foreplay, as a part of afterplay (that lovely, intimate, coming down period following sexual intercourse), or as the main sex event. In those racy trysts involving more than two sexual partners, it can be experienced during sexual intercourse. In any case, oral-genital contact, more commonly known as oral sex involves giving or receiving pleasure delivered to a person’s sexual organs primarily via the lips and tongue. This is typically done in a rhythmic licking or sucking fashion using one’s mouth, though any number of techniques can be employed, as we’ll cover in-depth throughout this book.

Why She Loves Oral Sex

Many women love receiving oral sex not only because getting the “ultimate kiss” feels incredible, but she has learned that it’s critical to her orgasm as well. Some women are only able to climax from having someone go

Rolls off the Tongue

The ego trip from the power element alone in getting head can be intoxicating for her. Being the object of a partner’s devotion only adds to the adoration she has for oral. With her dream lover between her legs, how can she help but not get caught up in the high of being serviced or pleasured?! She has let someone get up close and personal in her most private space, and that person — you — is going to town, lost in the mission of maximizing her pleasure. This only gets hotter when she glances down at what’s going on between her legs. The mere visual stimulation that comes from seeing (and imagining in her off-time) your head bobbing, drunk with desire, can be highly arousing. 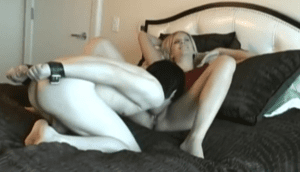 Of course, let’s not forget the power trip in this exchange for you and the elation that comes along with being the giver. While often cast as the submissive in being the provider, you’re not. You’re actually the partner in charge. In getting the green light to go down, you’ve been granted VIP access to your partner’s prime hot spots. Her pleasuring is in your hands. You control your hottie’s sexual destiny (at least for the moment) in commanding the action — all with the best seat in the house.

So take a moment as you’re working away to get turned on by seeing your gal become sexually excited, an experience made even sweeter when the object of your affection hits heaven. She may not be in that alone. As giver, you can thrive on your own “mental orgasm” in knowing that she is thoroughly enjoying your efforts. You created the moment necessary for sexual release, and that can be incredibly fulfilling.

Despite its mass popularity, believe it or not, oral sex is on the books as illegal in some states, like Indiana. Getting caught engaging in these “acts against nature,” even when consensual and with another adult, can mean can getting fined and imprisoned for up to one year in states classifying oral sex as a felony. So for those of you dead set on breaking the law, let this bad-ass bit fuel hotter oral. After all, such restrictions and concerns have helped to fetishize oral sex over the ages and have turned it into a mystical ecstasy of sorts — and all the more desirable. So for those of you who can legally have cunnilingus, stoke the same thrills by pretending you’re doing it in Indiana.

Since the sexual revolution of the 1960s and 1970s, the United States has seen a growing acceptance of oral sex. More popular than ever, it is widely practiced today, with the increase in mouth-genital techniques seen as one of the most dramatic changes in marital sex alone in the past fifty years. Whereas a generation ago, oral sex was seen as a shameful taboo, such sex play has become an acceptable behavior. That’s not to say, however, that it doesn’t still pose controversy. As recently as 2010, dictionaries were removed from southern California classrooms after a parent complained that a child could read the definition for the term oral sex. The school district responded by pulling Merriam Webster’s Tenth Edition from shelves for fear of being too “sexually graphic” and inappropriate for certain age groups. Despite regularly ruffling feathers, oral sex has become regarded more and more as an important and healthy component of one’s sexual self.

While not as widely practiced as other types of sexual deeds, oral sex is a very common practice. If any hesitancy you have in engaging in oral comes down to safety in numbers, rest assured. Various studies show that such sexual behaviors are practiced by the majority of people, with about 90 percent of men and women ages 25-44 reporting having engaged in oral sex as givers or receivers!

For that, we should perhaps be thanking the media for plugging oral sex. It’s hard not to notice that giving the ultimate in oral sex tips are regular headliners and features in online and hardcopy media outlets alike. This eagerness for anything oral has, however, perpetuated some of the myths and misconceptions tackled in this book. All this attention feeds many of the stereotypes swirling around oral sex when it comes to gender differences. Articles for men tend to detach oral sex for either partner from the emotional side of the relationship; women’s articles tend to treat oral sex as something done to enhance relationship intimacy. For him, it’s cast as an experience in and of itself, requiring none of the niceties or symbolism it supposedly does for her. While there is some truth in some generalities, buyer beware! In enjoying such articles, you need to be mindful about the messages you’re getting, recognizing how the media may be influencing your thoughts, her expectations, and your practices around such pleasuring.

Which Women Are Into It?

A far cry from previous generations, many women today have become enthusiastic about letting men go downtown. A much larger percentage of women under 50, compared to those over 50, have ever given or received oral sex in their lifetime.

Studies involving college women have found that attractive women are much likelier to engage in oral sex and other sexual acts, including woman-on-top position. Researchers believe that this could be because of the expectations these women put on themselves, the more frequent opportunities they have to engage in such sex play, or simply because they feel a sense of sexual power in being beauties. Still, even more recent research has found that the vast majority of women are engaging in some type of oral sex or another, with most young women engaging in these activities because they enjoy them.

When it comes to ethnic differences, the National Social Life, Health, and Aging Project found that white women are about 30 percent likelier to give or receive oral sex than are African Americans, with Latinas falling midway between the two groups.

Why Being a Brainiac Is Sexy

Investigations on who has done what orally have revealed that one’s education, which is often related to one’s

social class, is a factor. The majority of people in the United States who don’t engage in oral sex are in the lowest educational groups. The higher one’s education level, the likelier it is that he or she is engaging in oral sex. Men who don’t graduate from high school are less likely to have performed oral sex than men who are better educated.

The women’s liberation movement, reproductive rights, and support in exploring their sexuality are among the reasons believed to impact a female’s sexual practices to a certain extent. Women engaged in these social movements tend to be more educated and more aware. They also tend to be more accomplished in some ways, like their level of educational attainment. Educated girls, it seems, are more likely to diversify their sexual repertoire between the sheets. No wonder it pays to stay in school!

Are humans the only species on earth that engage in oral sex?
No, animals may engage in oral-genital stimulation, especially when the female is in estrue (heat). During this rare time of year, a male may lick her genitals in response to pheromones she’s giving off.

Oral sex can be a very personal, intimate sexual experience for some people and no big deal to others. For some people, oral exchanges are reserved for partners whom they feel really close to. They may regard oral intimacies as a marker of how lovers feel about each other sexually and emotionally, making a relationship all the more exclusive. For others, it’s a staple part of every sexual affair, a cheap thrill handled with indifference. In a number of cases, the degree of intimacy can come down to the situation and with whom you’re exchanging lip service.

Casual or not, having oral sex is quite physically intimate for both the giver and receiver. In most giving scenarios, your face is nestled in your partner’s loins, your lips, tongue, and face pressed against the softness of her thighs. No matter the social meaning of this act, being up close and personal can make any experience extremely emotionally intimate. You can hardly get any more physically personal than involving your head and face in pleasuring your lover. Add to that the symbolism involved, and it can be a huge deal.

A Man’s Guide to Oral Sex: Your guide to incredible, exhilarating, sensational sex (The Secrets of Great Sex)

4 thoughts on “How to have oral sex”