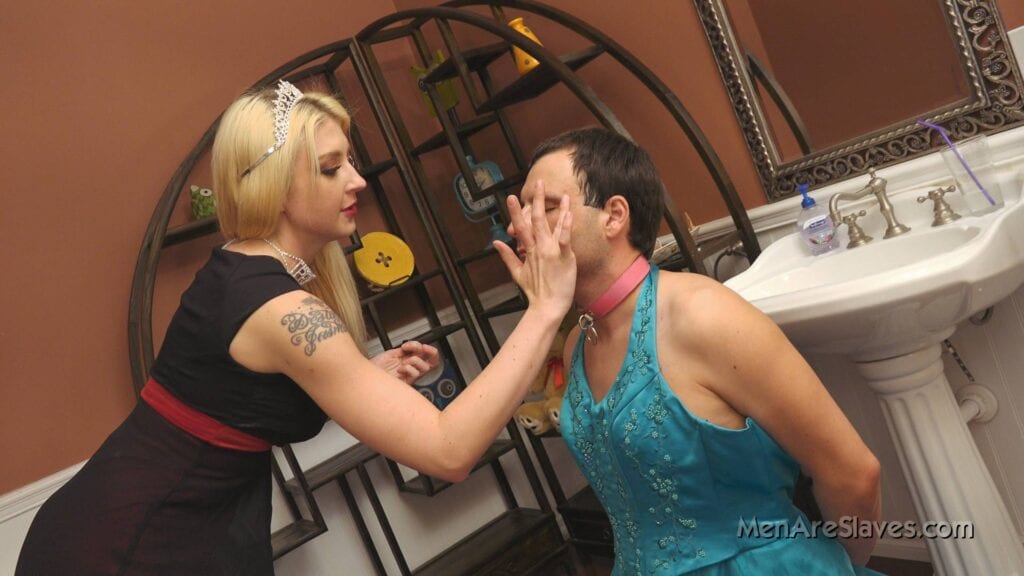 Al’s wife had built on his mother’s discipline training.  She’d gotten him well trained into accepting any and all punishment she wished to inflict on him.  Through psychological humiliation and skilled brainwashing, he was now very tractable and slavish.

Yes, his wife’s punishment was painful, but after it was over, the joy of knowing he’d been forgiven by her seem to outweigh the pain. His wife, Cora had trained her mollycoddled young husband to not move or pull away as she slaps him hard.

He has been so well trained in how to prepare himself for her whippings that she need only give him a soft-spoken command and he sheepishly strips off the necessary clothing exposing those parts of his tender flesh she wishes to blister with one of the many whips, canes, or straps she had for him.

Al, who is also made to dress effeminately most of the time, is frequently addressed as “Alice” by his wife and his own mother.

Alice can always count on his mom and his sister and aunt to back up and support his wife in her total subjugation and humiliation of him. His wife and all his female relatives mentioned above, have boyfriends and lovers.

Alice has never put it in his wife of five years even once.  He has only been able to consummate the marriage sexually with his tongue.  Even when they were dating, his wife only let him eat her out.

She didn’t even allow him to feel or suck on her well-endowed tits. She was saving this treat until after marriage.  Typically, after he mouthed her off when they were on a date, he was allowed to jerk off under her supervision as she let him look at her exposed breasts and lush hairy muff.

Unknown to Alice, his fiancee was known to be a common tramp to the men in the town.  She made her self available for all sorts of sex with any and all studs who had a hard-on.  She was a favorite and willing participant in gang bangs where she was the only cunt for groups of men.  She boasted to her friends about having had over 40 trains pulled on her and having enjoyed the big dicks of over 500 different men.  She was only 23.

After Alice purchased the 3-carat engagement and wedding ring set for his beloved fiancee, and the wedding date set, she stepped up her already severe domination of him.

His mom and sister knew of his wife’s activities since they ran in the same circles.  Alice didn’t know it, but his female relatives and fiancee were in on a cruel conspiracy against him.

To further increase his need to do her bidding, his wife to be, slipped a male chastity belt on him the same night he presented her with an engagement ring.

She kept the key to the locked device and she demanded to be present when it needed to be removed for his baths.  In fact, she treated him like a baby and washed his small genitals.  As she did so, she would often and repeatedly comment on his “bird size wee wee”.

Alice thought it was special for her to fuss over him like this, little did he realize the psychological conditioning he was undergoing.

Alice, who was accustomed to jerking off frequently, with and without his fiancee’s supervision, found this pleasure now subject to her whims now due to the constraint of the device he was wearing.  She no longer let him jerk off as often as before, not until he had performed all the tasks and chore she demanded of him.  Often, even after he did them, she wouldn’t permit him to play with himself because she found some minor flaws with how he did her bidding.  To further put him on edge and to frustrate him, she also denied him the taste of her moist fuzzy muff, a treat he was almost addicted to.

Alice’s family totally backed his fiancee as he complained of his fiancee’s treatment.  His complaints were expected by the scheming women.  This set the stage for something new in Alice’s relationship – his corporal punishment by his fiancee.  At first, it was over the knee spankings.

Within a few weeks, he was being slapped and whipped with a riding crop for the slightest violation of her many rules.

As he often got slapped or beat in the presence of his family, his mother often complimented him on having a woman who loved him enough to beat a discipline the way his fiancee was.  This type of subtle brainwashing made Alice think positively about what was happening to him as he walked around often with his fiancee reddish handprint on the side of his face and welts she put on his bottom.

With the wedding date only two weeks away, his fiancee, started acting coolly toward him, not even bothering to punish and whip him as often as before.

She wanted to delay the wedding for two more months.  As glad as he was to have a reprieve from her constant “love licks” he now feared losing her – “his prize”. He found himself willing to do whatever he could to change her mind. She toyed with him and coerced him into agreeing to her being able to date other men to see if he was the right one for her husband.  Of course, Alice’s family went along and encouraged him to allow his fiancee’s wish. 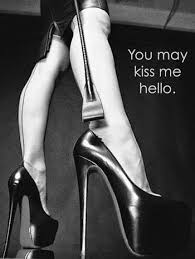 Satisfied he had a chance to make her his even at the expense of sharing her, he felt relieved that he wouldn’t lose her completely.  Especially since her domination and punishment of him resumed back to previous levels.

Alice’s fiancee played this trump card several times.  The wedding was postponed several times and each time he gave in to her.  Also doing his ordeal, something else was going on that Alice was unaware of.

He found it very easy, for some unknown reason to wear more feminine attire, identify with her womanly needs and even go on a double date with her, like a TV, with two men his fiancee knew.

Alice found himself attracted to the two men and found it fascinating when his fiancee had him sit and watch the two “real men” make love to her.  He never had the opportunity to do that to her, but for some reason, that didn’t matter that much as he watched them.

After the trio was finished, Alice who was sexually aroused, and still wearing his cock lock, did feel somewhat left out, even though he enjoys having watched.

As if reading his mind, his fiancee suggested that Alice do his part by sucking her pussy. The two men laughed and agreed with her.  They both didn’t want Alice to be left out.

The pressure of their eyes on him and the absence of having tasted her pussy in a while drove him to answer his need to be intimate with her in the only way she really permitted him.  Her sloppy gloppy hairy gash looked so messy and nasty, but the gamy smell and strong scent of semen seem to override that.

His need to sample this new concoction was great.  He loved it and brought his fiancee to a rousing climax as well as consuming the slimy discharges put in her wet dripping pussy by the two big dicks.

As a reward, Alice was permitted to jack off for his fiancee and the two studs.

His need was so great, he didn’t get shame until after he got off.

However, his date pulled him over and cuddled up with him, as did his fiancee’s date.  This made Alice feel better.  So much so that he agreed,  reluctantly, to fondle and lick his date’s big fine tool.  The feel of his tongue on the heated hard meat was good.

“That’s it, baby, show the man you know how to respect him, be a good sissy cocksucker.”

The comment from his fiancee seems to make everything alright.  Alice felt relieved that his fiancee, his defacto mistress, condoned not only what he was doing but that it was a proper way of paying respect to men.

Once he had the swollen dick head between his lips and saw his fiancee mouthing her date’s dick also, he followed her lead and worked on his date’s cock in the same manner.

“You were wonderful tonight dear.  I’m ready for the wedding now that I know you know your place.  You’re going to be the perfect husband for me.”

Alice was somewhat confused by all that’d happened but was heartened by the news they would get married.

She was driving and had her arm around her transvestite fiance, gripping him securely as she talked of the happiness they would experience being married.

Alice sat silent and insignificantly as he resigned himself to his fate as a slave sissy husband to this beautiful assertive woman he’d worked so hard to make his wife.

At the wedding, it was Alice who wore the wedding gown, marched down the aisle and was given away by his mother.  His mother cried in joy as the couple was pronounced “Woman and husbanette”.

He was married to his wife, his mistress, and was always expected to be loving, loyal, faithful, and obedient.

However, his new wife, on the other hand, was only married to him to the extent as one would be a “master to a slave”.  The female minister’s exact words. On his wedding night, Alice was given another surprise. His new wife’s favorite stud took Alice’s asshole virginity, as his new bride looked on.

3 thoughts on “The New Husbanette”