Somebody asked me recently about my first memories of powerful dominant women. I didn’t need to think long. It is not the earliest memory, but definitely the one that I have come back to quite obsessively, and it is still vivid and still just as unbelievable.

It was in the seventies, and it was the age of the miniskirt. Her name was Miss McMahon. She had a rather short dark hair, and she was a looker. I still can’t fathom how she got away with her practices for so long. Even the way she dressed, could raise questions. Take for example her mini dresses. So provocatively short! And the shoes! I understand it was seventies, and nothing really that unusual by itself, but you should just have seen her! She was the epitome of a temptress. Classy and refined, granted, but still, a grammar school teacher?

I remember the shoes in particular – they were platform wedge sandals, not the hippie type, earthy, back-to-the-nature, but unusual and dainty. I have actually found a picture that seems to match my memory: 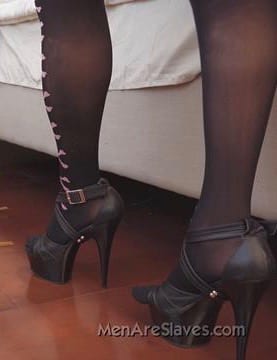 Imagine them, worn with a sleeveless silk mini dress, her silky smooth skin tanned. And her face. Just so sweet and lovely. She spoke with a British accent that sounded exotic and so upper class to us. And she was always super well mannered, never a slight mark of anger or frustration defiling her angelic beautiful face.

She must have noticed how the eyes of the boys follow her every step. I still don’t get it. They were fourth-graders! She obviously didn’t think much of them. The desk she sat at didn’t have a modesty panel, so when she crossed her lovely legs, none of the boys could any longer focus on the subject. She did it with such confidence and poise, just like a queen, assuming her position in front of her minions. I heard boys talking with excitement that they could see her panties. It wasn’t true, I think, but you know… the boys.

It was a game. We all knew that how improper it was to just stare at her legs or her cleavage, or her beautiful face. So we tried hard to hide it, but it only made those little snapshots we managed to store in our memory all the more valuable. I remember that sometimes I felt like I couldn’t take it anymore, all I wanted was to stare for as long as I could. I would cover my face with my hands and look in between my fingers, hoping nobody would notice. I would memorize every detail of her fine anatomy, and replay them later, mostly at night, in my bed…

One of her methods to discipline us, was to make the offender to kneel in the corner, with his face facing the wall, and his hands up. She even requested that one of the girls would make a bag filled with rice for the purpose of making the kneeling punishment more memorable. As some poor boy (they were always boys!) was starting, in exhaustion, to lower his arms, she would mock him in front of the class. All with that sweet lovely smile of hers, and that super-polite manner of speech. She would say things like, “are you getting tired, Peter? It’s only fifteen minutes longer. We don’t want to start all over again, do we?” And the class will laugh. Quite unaware what was happening to me, I started dreaming of being punished by her. But it was just unthinkable for me to disobey my beautiful English teacher by breaking any of her rules.

At some point, and she made it sound like it was actually funny, she decided that to teach us to spell better, for each mistake that exceeded her standards, she would give a bad spelling student one stroke on his palm with a wooden pointer she used for grammar presentations. Now there was one boy in our class. He was quiet and obedient, but he wasn’t very bright. His name was Wally. She was going through the test results. She would order each student to come to her desk. She would announce the number of strokes, with kind of light tone, almost jokingly, and then would execute the punishment. The boy would stand in from of her, a terror in his eyes, and she would be sitting in her chair, her legs crossed, fully relaxed. The strokes, although quite painful, took almost no effort for her. She would do it with such grace and ease, laughing sweetly at the student’s attempts to avoid the full impact of the pointer by instinctively withdrawing his hand. The class would laugh as well. She had the way of making it seem like a funny thing, something like when a boy is forced by a coach to do pushups, and his strength begins to fail. More of a good-natured teasing and challenge than a punishment. Well, she took another test in her manicured hand. She chuckled. “Wally, come over here, dear.” He came to her chair with a look of despair. Well, he wasn’t the brightest lamp on the block, but he was bright enough to know that he must have not done very well, as far as the spelling went. “It is sixty five, dear,” she announced with a smile. The spectacle began. After sixteenth strokes or so, the boy just couldn’t take it anymore. He couldn’t help but repeatedly withdrew his hand to avoid further strokes. He started to writhe and jump, and cry, with each stroke more and more. It could be quite surprising, but the more he suffered the more the class laughed. It seemed particularly funny for them as well as for Miss McMahon, to see him withdraw his hand, against his will, knowing that the stroke will be repeated, and his suffering prolonged. She waited for him to recover, as he was hissing and crying and blowing air on his burning palm. And then, smiling sweetly, she would tell him, “We have missed again, dear, didn’t we?” I was terrified and I was wondering if I was the only one in the class. But at the same time, and I didn’t quite understand it, I noticed that I got a hard on. It was just the combination or the perfect looks of lovely sweet Miss McMahon, and the laughter from the class, and the helplessness and suffering of poor Wally. The contrast between the beautiful, superior and powerful, and the helpless, inferior, stupid, and humiliated It was the look of Miss McMahon, at ease, and relaxed, beautiful, her shapely crossed legs as if just announcing how much superior her position was in relation to the writhing, screaming crying boy. Wally started to beg her to stop, and all she did, was to gesture with her finger, still laughing, to position his palm the way that she wouldn’t have to make a slightest effort to hit him comfortably again. It just blew me away. I was changed. My spirit was broken. And I began to worship my Superior Beautiful Cruel but Sweet Queen with kind of abandon unknown to me until then.

From then on, all the little incidents when any of students were put in a position of inferiority and submission to Miss McMahon would cause me to react with the same mixture of feeling – terror, humiliation, and now quite noticeable sexual excitement that all combined just kept on making me more and more worshipfully submissive to the Divine Miss McMahon.

One time another teacher brought a boy, caught misbehaving in the gym. She would explain to Miss McMahon the nature of the problem. The boy, quite unexpectedly approached Miss McMahon, his head down, and, apologizing, he kissed Miss McMahon manicured dainty had. This by itself wasn’t anything unusual in those times, it was a part of a southern upbringing. But I was mesmerized. To make matters only worse, or better, depending on the point of view, Miss McMahon, after the other teacher left, simply told the boy – “the corner”. With her usual smile. And he obediently took the rice bag from the shelf, and assumed his kneeling position, his hands up.

Later on, it became a routine that every time one of the students misbehaved, Miss McMahon would call him to her desk. She would execute a number of strokes she deemed appropriate, with the wooden pointer, and then the student was told to say, “I apologize Miss McMahon. Thank you Miss McMahon.” It sounds unbelievable. Now even more than then. I just fantasized that the student would be forced, after the apologizing and thanking, to kiss Miss McMahon manicured dainty hand.

But all of that, to my disappointment, ended quite unexpectedly. It was because of the new method of punishment that Miss McMahon came up with some time later. She would no longer punish students herself, but ordered another student to do the beating. And if the student wasn’t hitting hard enough, she would tell him that he would be punished too, if he didn’t satisfy her standards (I started to call those standards, to my enjoyment, “Her Divine Whims”). All that while super polite and with a smile. And the students always complained. For me I just relished the scene. It seemed to only underscore Miss McMahon power and superiority. She no longer had to make any physical effort, sort of as it was beneath her station. She would just give orders for punishment, and fully relaxed, with her lovely legs always crossed, she would watch.

I started to feel an urge to tell someone about it. I felt that telling about it, for some reason, would be exciting. I wanted to savor the memories. I told my sister, and she told my father. He was enraged. He called this fascist methods straight from a concentration camp. He went to the school principal, and also talked to Miss McMahon. I actually saw him leave a classroom after talking to her. He was smiling and laughing, as if he had a winsome conversation with a good friend.

The next year he arranged for me to go to another school. Later on I heard that some of her students cleaned her house on weekends. My imagination just went wild. I started to fantasize I was one them, a servant owned by a superior beautiful cruel sweet Queen, and my fantasies, with time, developed into quite perverted and cruel stories of female superiority and domination, and male submission, suffering, and humiliation.

A Tournament That Turned into My Wildest Fantasy