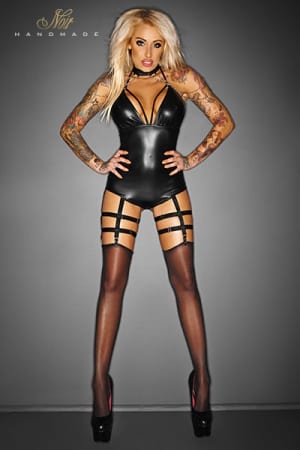 “Do you think the place of a submissive is on the couch?”

“No Mistress,” I replied, descending and kneeling.

At that moment, I realized that for the next 24 hours, I would have to constantly be in a submissive position.

After performing the chores, I rejoined the room, the door of which had been left open. Victoria seemed to be asleep. At the foot of the bed I saw a pillow and a sheet on the carpet. I settled myself down, trying not to make too much noise. The night was rather uncomfortable. Due to bad positions, I woke up several times. When the alarm sounded, I was still very tired and had aches. However, I got up in haste to go and prepare my host’s breakfast.

Once ready, I brought her to Victoria in bed. She thanked me and told me that she had some shopping to do this morning and that I was going to accompany her. She allowed me to have breakfast in the kitchen before I was ready and waited in front of the door. While I was eating, I was wondering about the type of races she wanted to do and worried that she might want to exercise her dominance in public. In spite of my doubts, I finished preparing and placed myself on my knees before the door. From my position I discerned his preparations.

After a moment I heard him arrive:

“Very well, you have understood what position you must adopt when you expect me.” Get up and take the bags!

Turning around, I could see that she was dressed in a very conventional way, which reassured me. We left the apartment discussing everything and nothing. Aside from the fact that I was expecting her in front of the shops, there was no indication that Victoria was my Mistress.

After two good hours of racing, we returned to the apartment.

Feminization of the submissive

Scarcely had the door been crossed, the roles were rested:

– On all fours and will make me sink a bath!

As I finished my task, she rejoined me and handed me a bag:

“Look, it will be your clothes for the rest of the day.” Will change you.

Still on my knees, I grabbed the bag lanyard with my mouth and walked to the bedroom while Victoria undressed.

Once the door was closed, I opened the bag to look at what it contained. Inside, there was a small black top, a leather skirt, a bra, a shorty and a pair of stockings. Beside the door I also saw a pair of heeled shoes, too big to be to Mrs. Victoria. I had never worn women’s clothing and I was not comfortable with that idea. Like the day before, I wondered if I was sure I wanted to go further or whether it would be better to stop everything now.

Indeed, this story was fast and I did not know how far Victoria could take me. Nevertheless, his behavior since the day before make me want to trust him. So I grabbed the clothes and began to put them on. The materials were pleasant to the touch. However, the shoes were quite uncomfortable. Once fully dressed, I sat in the mirror. I found myself totally ridiculous in this outfit.

With a hesitant step, I then took the direction of the bathroom. When Victoria saw me at the entrance, she smiled broadly. She asked me to approach and turn on myself. Then she took advantage of it to touch me and feel me. She then padded the bra to draw me a small chest.

– You are perfect in this outfit, will prepare lunch my maid.

Once ready, Victoria joined me in the kitchen. She had changed clothes from this morning. Gone are the classic outfit. She had donned a bustier, a thong, stockings and long thigh high heels. I found her magnificent and she quickly realized it.

She sat at the table and allowed me to join her in sharing the meal. Lunch was normal, despite the incongruity of our outfits. The dish was not of very high quality, but Victoria was still satisfied. At the end of the meal, she asked me to get rid of her, then to join her in the salon. I rushed to get rid of the table, but several times lost my balance due to my heels. Once the kitchen was set, I took the direction of the living room. Victoria was equipped with a dildo belt of a size more imposing than that of the day before.

“Come on, come on and show me how good you are!”

I knelt down and approached Victoria.

I pulled out my tongue and began to lick it, then caught it in the mouth. Victoria put her hands on my head to pace the cadence and force me to make it enter as deeply as possible into my mouth, which had the effect of shedding a few tears from my eyes.

I had to suck her so long. When Victoria felt that I was beginning to tire, she allowed me to retire.

She then put her body on my back and gently caressed my cock. After this intense penetration, I was delighted at this moment of tenderness which I experienced as a reward.

Victoria kissed me in the neck, then retired softly asking me to stay in position. She came back and spread my buttocks into it, which I thought was a plug. He entered very easily. She then handed me my shorty.

I saw her grab a phone and take a picture. So I was panic-stricken, but she reassured me by showing me that it was my own phone.

– I just want you to show Lauren Monday how nice you were to me today.

She then landed on her knees on the sofa next to me:

– You have three minutes to jerk and enjoy. I want you to ejaculate on my ass.

It was more than I needed. I approached her buttocks and masturbated. I enjoyed quickly on it. My seed spread out on her buttocks and swept into her line. I knew she was going to make me lick it, but I was hoping it would leave me a loophole. For all that, it was not.

– Now, come clean me with your tongue.

– Mistress, I did yesterday and I do not really appreciate this practice.

She stood up and returned a memorable slap.

– It is not you who decides, when I give you an order you obey. It’s out of the question to spoil your sperm and it’s not me who’ll stick to it. But do not worry, I have many recipes to vary the pleasures.

Before my hesitation, she slapped me a second time:

She resumed her position and I began to lick her buttocks. Fortunately, the quantity was less than the day before. Then I slid my tongue into her line and ended her anus. At her reaction, I realized she appreciated. So I inserted my tongue slightly inside. Meanwhile, Victoria was caressing herself, which allowed her to re-reach orgasm fairly quickly.

– You still have to learn to be a good submissive, but I think you will please me. I have a few things planned tonight, you have 10 minutes to change. Keep the plug, you’ll take it home.

I got back on all fours to head for the room. After I changed, I went to Victoria in the kitchen where she offered me a refreshment. She took the opportunity to question me about my impressions and my desires. I could express my fears and my wish to continue the adventure. She was delighted and assured me that we would meet again very quickly. Before taking leave, she handed me a pair of panties and said:

– I want you to wear it on Monday at work. I’ll let Lauren know that you’re respecting my orders.

I took the lace panties, plunged it into the pocket of my jacket and left my new Mistress.

A Strip Tease for my Demanding Mistress Fiona – Part 3

The First Step to My New Submissive Sissy Lifestyle