A Strip Tease for my Demanding Mistress Fiona – Part 3

As a reminder, I recounted how I played the role of a stripper to shoot videos. 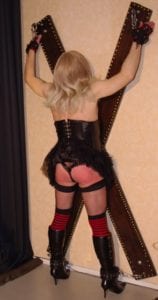 A few months later, Mistress Fiona and her dominating girlfriends have to host a club evening, and Mistress Fiona invited them to share a meal before the evening. I was invited, rather summoned (but for a submission invitation or invitation, it comes down to the same). During the meal, this metamorphosis of the boy as a cabaret dancer approached. Mistress Fiona decided that I would do a strip tease during the evening. And finally, Mistress Fiona had the idea that I’d do a strip tease preview for the Mistresses, presented at the meal. The meal is finished hastily, I have to do the dishes hastily, change clothes hastily, make up. I have already said, the subject must adapt to the situation in record time.

Preparing for the Show

The Mistresses chat in the salon, leaving me alone in the dungeon. I fill my bag with the black leather mini skirt, black leather waistband with the lace in the back and the hooks serving as front closure, the leather boots with reasonable heel height about 10 cm, fishnet stockings, and the black string in lace so fine. I slip all these clothes in the bag quickly. I also put on the white blouse. I applied a fast but complete makeup with foundation base, matte powder, a sprig of powder on the eyelids and lipstick, finally the blonde wig. I hardly have time to put on the wax in black vinyl that mistresses invade the dungeon, impatient. Mistress Fiona starts the music.

Each one grabs a whip by giving orders, forward, backwards, right to left, stop, advance, balance your ass bitch, balance back and forth, balance on the bitch side.

The Best of the Dungeon

It is completely bazaar, and it is impossible for me to obey the orders of each. They give their orders at the same time. No synchronization. It’s too messy, if that’s the way in the evening, it will be ugly.

I re-center myself in the middle of the dungeon. I resume the rhythm of the music. Admirers, they let me play at my leisure. I walk waddling, I lift the skirt showing my ass to each. I unbuttoned, pull from one side to unveil the blouse, closes and then opens again. I lower it slightly to unveil the shoulders then I make a face while dancing and lets slide it to the ground.

The mistresses have a smile, they have diverted. You still have to do the same thing inside the club. Besides, it’s time to leave for the club. Upon arrival, already a little crowded. As always, in the early evening everyone is seated as a group or couple, chatting while having a drink. Then everyone will head to the props to start the games. Mistress Fiona goes to the bar, talks with the master of the place.

I imagine she is developing the scenario she has planned. Indeed, she beckons me to move forward. It is for the choice of the music during the show. Rather, my show. I keep aloof while I drink my glass, preparing myself psychologically, the club is now three-quarters full, no question of making a false note before this crowd, I must honor the Mistresses, as all the Mistresses were present.

My nickname being Latrine, the manager announces that madame Pipi will do a strip tease and chain with the chosen music. I go waddling from the posterior to the center of the club, and repeat the performance I gave earlier. Again, I give myself thoroughly, settling on the chosen music, this should last about 5 to 6 minutes.

When the skirt falls to the floor, revealing my testicles since the string is not enough to hide them, my bare buttocks.

Mistresses are Eager to Play

Since the string sinks into the skirt, Mistresses, my Mistresses are so eager to play. Take me by the arms, take me to the cross, tie me to the wall, my back, my buttocks in front of the public and they begin to strike with the whip, the whip, my back heats, my butt also.

The blows are strong and fast. I would keep the marks all week. When, at the end of a time which seems to me very long, they free me. I see that other participants have also switched to their favorite games. But the Mistresses do not stop there, they drag me to another accessory and start hitting again. I must endure, I must do honor, I still assume.

Later in the taxi that brings us back, the Mistresses still talk about my performance. The driver of the taxi does not lose a crumb, but that does not matter, in PARIS, the taxi drivers hear so much stories, we drop the Mistresses first, Mistress privilege, and then the driver turns to me Asking the king, “I will lay you where?” “. What he remembered from the conversation was that I was the animation of the evening.

Here, while giving me all to honor the dominant players, the boy who was transformed by the magic of the Mistresses as a cabaret dancer for the needs of a video that always turns on the web was solicited to animate a club evening.

Submissive Man Subjected to a Game of Role -Play