Stranger to Mistress Over Coffee

It started so slowly I didn’t even realize there was it. I was in a Costa ordering an Americano when I dropped some change. A couple of coins rolled under a nearby table stopping by the foot of an attractive woman who sat drinking a latte. I approached the table expecting, as one does, the woman to reach down and get the coins for me. But, have you ever been in one of those situations where you don’t know the rules of how to act? She just sat there smiling somewhat enigmatically. I wasn’t sure if she’d noticed me or not.

Now, I wasn’t bothered about losing a couple of quid but deciding she was just being awkward I determined to be so too. I scrambled to my knees and reached under. But she surprised me swinging her foot over (almost grazing my face as she did) and reaching down to pick up the coins. Her enigmatic smile became warm as she spoke, a giggle touching her voice

As she spoke she leaned towards me and took my hand, gently folding my fingers around the coins. Being called cutely is not a common experience in my life. An unexpected compliment combined with my usual inability to articulate in the presence of attractive women should have brought things to a halt then and there. But somehow we ended up talking and drinking coffee for hours.

That led, as it does to a number of fun dates and trips to country pubs for lunch on the occasional Sunday. Then she proposed we go away for the weekend. I was never going to say no to that so come the end of May I found myself driving us down to the Cotswolds to a country house she’d booked.

My first weekend with this mysterious woman 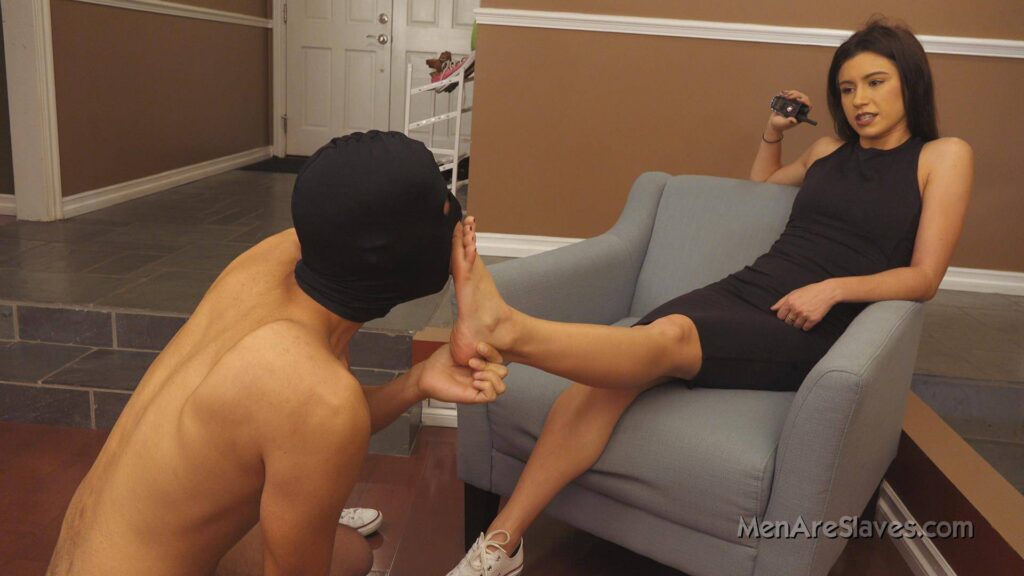 After a long drive, I pulled up to the quiet grounds of a typical honey-stoned Cotswold house. After the formalities with the owner, I carried our bags to the room. She followed a couple of minutes later as I was putting away the things I’d bought.

Protesting feebly I allowed myself to be bundled to the shower, feeling content at the thought of her doing her domestic act.

Half an hour later I was brushed and scrubbed and half dozing on the bed while she took a shower. My semi-stupor vanished as she stepped into the room. She hadn’t bothered to dry herself. Water beaded like jewels on her soft skin. Occasional rivulets of cooling water trickled over her curves. The dark hair of her mound glistened. I sprang from the bed to go to get but she was quicker.

Her hand pushed me gently back till I fell back onto the bed.

I lay there as she clambered onto the bed beside me. She had a wicked smile playing over her mouth as she reached her hand down onto my stiffened cock. As she started playing with it I let my hand strike down to her thigh. I leaned up a little to reach deeper.

Here, stood up the incredible curves of her bum swaying as she walked to the drawers. She pulled something out and hurried back, kneeling astride me on the bed.

A bit confused I held up my arms and in an instant, she had them both bound above my head using what looked like her stockings.

Well, short of ruining her stockings I was stuck. And let’s be honest here, she said she was going to enjoy herself playing with me. Why the hell would I want her to stop?

So much pleasure and so much frustration at the same time!

Nearly an hour later it was a different story. Not that she hadn’t given pleasure. Far from it, it was the best ‘fun’ I’d ever had. Except. Well, except I hadn’t come. I was ready. Oh, boy was I ready. My cock was stiff and slimy with her spit and dribbles of pre-cum. But there had been no release. Now her mouth was there again, tongue flicking and teasing. I groaned.

She looked up at me from between my legs, all cutesy and innocent-eyed. A look only slightly spoilt by her hand squeezing my cock beneath her chin.

Now anyone will realize that the situation I was in was not one conducive to rational thinking.

This was because she’d transferred her attentions for a moment to my balls. She looked up again.

She left the crotch area.

So another hour later I still hadn’t come. But she had. And to be fair the pressure to come was more manageable. She knelt above me her hands gripping the headboard above where mine were still tied. Her pussy was slick with slit and her cum. My face was sticky with it. My neck was aching a bit as my tongue slipped along her lips and onto the bulb of her clit. I sucked and licked some more, feeling the tremble in her thighs as they tightly squeezed my head. A few minutes later and the juddering and moaning stopped. After a few seconds with her hair-covered mound pressing against my mouth, she slipped to the side seemingly exhausted.

We both lay quietly, she still trembling slightly, me hopeful that now I must get a chance. Silently she moved to my wrists and after a bit of a struggle managed to untie them. She started to snuggle, which I don’t mind normally but I’d been strung out for two hours now. And I wasn’t thinking. I held her but mumbled, “my turn now?”.

Well, you’d have thought she’d found out I’d shagged her sister. She leaped from the bed, almost shrieking.

Tears were forming. I hurried to her

My loyalty tested by this dominant Mistress! 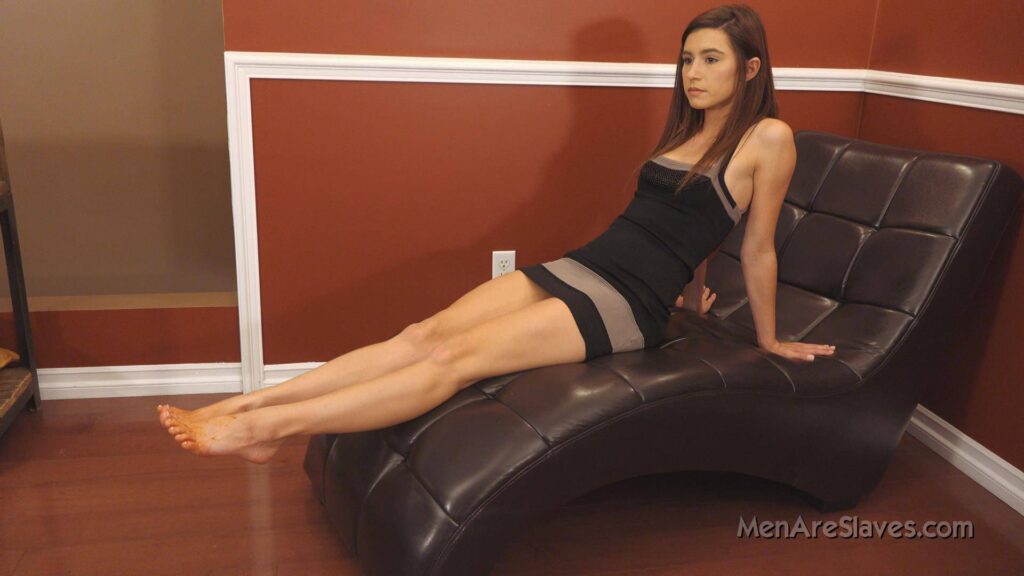 She turned back to the bed and sat. I tried to go to comfort her but she shook her head violently.

I stood naked but rather less gorgeous a few feet away.

I saw them by her foot but didn’t say anything. She looked at me.

On My knees in front of this gorgeous Mistress!

As she sat there haughtily I knelt by her feet and reached under the edge of the bed, grabbing her slippers. She crossed her leg over, her foot almost grazing my face as she reached down and gently opened my hand.

This felt most peculiar. But I was so aroused from the last two hours it simply made my cock throb even more. On my knees, I took her foot in my hand. My heart was beating so fast. I was about to gently place her slipper on but she stopped me

I looked up at her from my knees. Tearful, but still beautiful and now stern. The pounding of my heart almost deafening me I took a breath and leaned in my mouth delicately nibbling the soft skin above her toes and my tongue gently circling around her big toe for my first kiss to Her foot.

A Dominant Mistress and her Stripteasing Submissive

The Night I Met this Gorgeous Mistress

1 thought on “Stranger to Mistress Over Coffee”