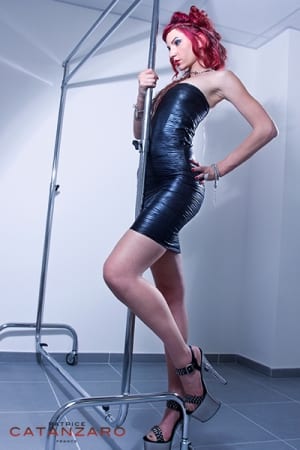 The sadistic dominant woman, Caitlin Snow, better known as Killer Frost, a super villain from Keystone City, Kansas who had the ability to absorb heat and project cold and ice was captured by Flash during a bank robbery and was imprisoned in the mutant area at the Iron Heights penitentiary. During a riot at the penitentiary, the sadistic dominant woman escaped from prison and stole one of the cars parked in front of the prison that belonged to a guard she knew.

She decided this would be a perfect opportunity to visit her old friend Michael, who lived in Niagara Falls. Michael lived in a cabin in the woods and Killer Frost thought this would be the perfect place to hide for an indefinite amount of time under the radar. She put makeup on her face and body to make her white skin look more human, a red wig to hide her short, white hair, and a hoodie with jeans. A few days later, she finally arrived at the cabin.

She ran behind one of the trees next to Michael’s house and watched as he unlocked the front door and went inside. Michael didn’t seem to notice her car parked in front of the house on the other side of the street. “Perfect”, she thought. He won’t question me when I tell him I’m having car trouble.

Michael walked into his house and put the groceries in his kitchen table when he heard the doorbell ringing. He quickly walked to the front door, “Hi Michael, it’s me Cat,” Frost said in a very sweet, endearing voice. Michael, surprised to see her, looked at her from top to bottom, “Cat? Cat, wait, are you… Caitlin Snow from Kansas City High School?” said Michael somewhat surprised. Suddenly, Caitlin jumped into his arms and gave him a big hug, “Of course I’m Caitlin silly, do you mind if I use your phone?” “Sure”, he said hesitantly.. He opened the door wider to let Caitlin inside his house.

Michael was nervous about Caitlin’s visit. He hadn’t seen her in years and all of a sudden she just shows up at his house. After all this time, what would she want with him, “Sorry for showing up without any notice, I was on my way to Niagara Falls and the battery in my car died,” she said. Michael laughed nervously, “Would you like tea, coffee, soda?” “Tea please,” said Frost. Michael stood up to walk towards the kitchen and unbeknownst to him, Frost was following him.

He put the kettle on the stove, took out some cups and a few tea bags and took the cell phone out of his pant pocket and started dialing 911. He had seen the wanted poster on the news last night about Caitlin. Michael was about to dial 911 when suddenly…. he got knocked out unconscious from a blow to the head.

Michael woke up an hour later, dazed, dizzy, and feeling very chilly. He was laying on the bed with his arms and legs restrained to the bedposts and stripped down to his black boxers. He heard someone singing in the shower. The bathroom door opened and Cat walked out. The sadistic dominant woman had taken an icy bath to remove all the makeup on her body and she wore a black dress that defined her curves and black stiletto heels. “Good morning, sleepyhead,” said killer Frost ironically.

Her Cold Touch Feels Like Ice On His Body

Michael tried to scream but his mouth was covered with black tape. The sadistic dominant woman walked toward him. She slid her fingers from the tip of his feet gently touching his legs, thighs, abdomen until she reached his neck. Killer Frost’s cold touch felt like ice being slid down up his body. Michael started to moan. “SHIIIII,” whispered the villain placing her finger on the boy’s lips. “You see, my plan was to steal something so I could keep running to Canada, but you don’t have anything of value.”

Indeed, the sadistic dominant woman searched the whole house and found nothing useful. “So I’ll stay here for awhile.” Frost patted the boy’s head where he had a bump caused by the blow that she gave him. “I hope you know how to behave,” the sadistic dominant woman said while freezing the boy’s bump in order to reduce the swelling of the blow. After, Killer Frost started going through his drawers in the bedroom.

While she was going through his drawers, Michael could not help but notice her well-defined ass. He looked away ashamed at how attracted he was to her despite the dangerous situation he was in. “You don’t have anything in the drawers,” she said. The sadistic dominant woman stood up and looked at her hostage and noticed he had an erection. His erect penis protruded from the folds of his boxers.

The Sadistic Dominant Woman Takes Advantage Of Him

“Ooo It seems that someone likes the scenery,” said the sadistic dominant woman leaning over the boy’s hips. Killer Frost froze his boxers and broke them to expose his uncontrollable erection. She took his penis and started rubbing it gently with her hands. Frost’s icy touch made the boy scream while the sadistic dominant woman laughed at him as she was jerking him off. “It’s been awhile since I’ve had a lover,” she told Michael. Killer Frost passed her cold tongue over the boy’s erect penis. “Sweetie, you haven’t lost your erection in spite of my cold body, so I’m going to take advantage of it.”

She placed her cold lips on the side of Michael’s ear, “It will be like payment for your services, but you’ll see how I like taking advantage of you and you will enjoy it,” she whispered in his ear while taking the blindfold off. Before he could scream she placed her hand on his mouth, “Don’t you dare shout or I’ll freeze your heart and I say that literally, I WILL FREEZE YOUR HEART.” Michael nodded in approval.”I’ll do whatever you ask me to do,” he said. 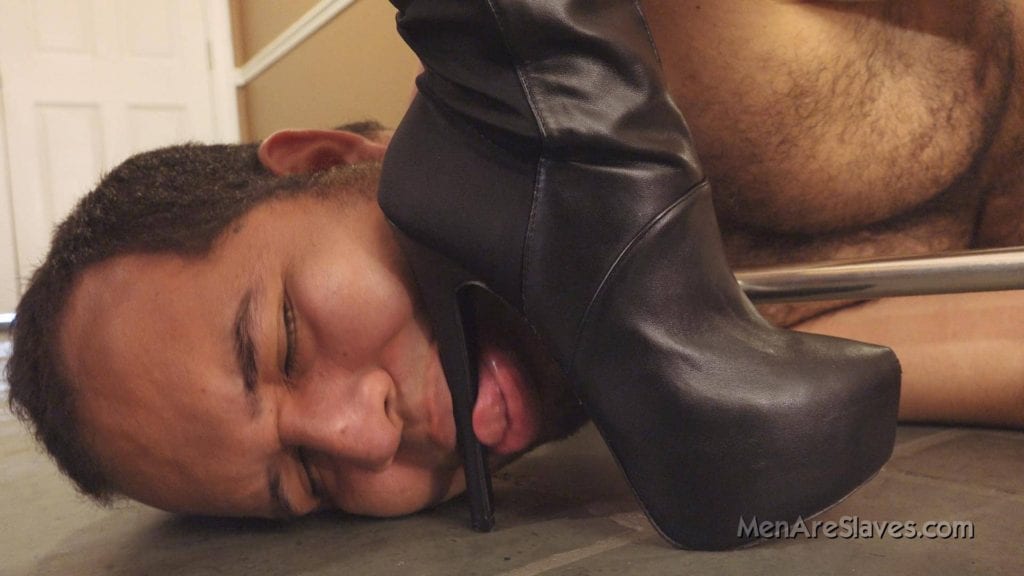 The sadistic dominant woman sat down next to him, lifted her leg and put the bottom of her boots on his face. “What are you waiting for…lick my boots!”. He obeyed and started passing his tongue all over the sole and heel of her boots. After a while, Frost formed a pair of thick ice rings around the base of the penis and testicles with the intention of ensuring he stays hard.

Then Frost climbed her hips over the boy’s face and sat on him. “Come on, take your tongue and give me pleasure,” she said. As ordered, first he licked the outer part of the jumper to excite her, eventually, she unbuttoned the bottom of the jumper so he could lick her lips, making her moan loudly and grind her hips over the boy’s face. To him it seemed like he was licking a popsicle with a peculiar texture. She came an icy liquid that dripped all over his face and almost froze his tongue.

Killer Frost laid on the bed while Michael tried to settle down on the cold floor to try to get some sleep; but before he could fall asleep, the sadistic dominant woman tossed her pair of boots on his body, “My boots don’t touch the floor, you got that?” Frost said while she put her boots on his chest. I will do whatever you ask me to do, Caitlin.”