The Reluctant Mistress and Her Unexpected Transition Part 3

Needless to say, an hour later when I let my dear submissive boy out of his cage, he was as hard as a man can get. But we didn’t have sex. Nope, not this mistress. I had prepared supper (I love cooking and sitting with Danny at the dining room table, chatting about the events of the day). Our meal was ready and I didn’t want it to go cold. Besides, if this submission thing was going to be on my terms, then it was my terms, right? 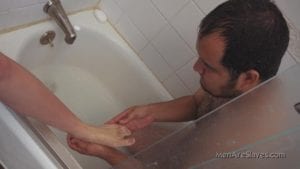 I sent Danny to the shower. I told him to take a cold shower and I’d be in to check. And make it quick. As I set the table I heard the water running, so I ran into the bathroom, pulled back the shower curtain (my shower is in an old-fashioned tub), and there he was, taking huge gulps of air under a spray of cold running water, his dick still hard as a rock. I rubbed my hand on his ass.

Then I gave his left cheek a stinging slap that made him wince.

At the table, I had set two bowls of soup. Danny’s place was always immediately to my right. I have always sat at the head of the table; it was nothing conscious, it simply seemed the logical place to sit when eating alone.

When Danny came into my life, I kept the habit and he sat next to me where we could brush knees. I liked being close to him. When Danny came into the dining room, his hair was tousled and still wet. He wore blue jeans and a hooded sweatshirt and was a little out of breath. I stood at the head of the table, waiting behind my chair. He’s a quick learner. He came around to move my chair back and seat me. As I sat I noticed him looking down, eyeing my breasts.

Good boy. I hadn’t thought out the naming protocol entirely yet, but I was thinking that in public, around other ears, I would have him call me Vanessa, otherwise, when at home or in private, ‘Mistress.”

“Time Out” arrangement in our new female lead relationship!

I was also thinking about a ‘time out’ arrangement, where if I called time out, he would revert to Danny and I would just be regular old me, Vanilla Vanessa. But not just yet.

That put a quizzical expression on his face, but he did as he was told.

He got down on his hands and knees. I noticed he wore loafers, no socks. In a rush, poor thing. Well, I looked down on him, his head poised over the bowl, and it was another Deja-vu moment where I knew exactly what to say, it all seemed so familiar.

Mistress’ Pet on the floor during the diner 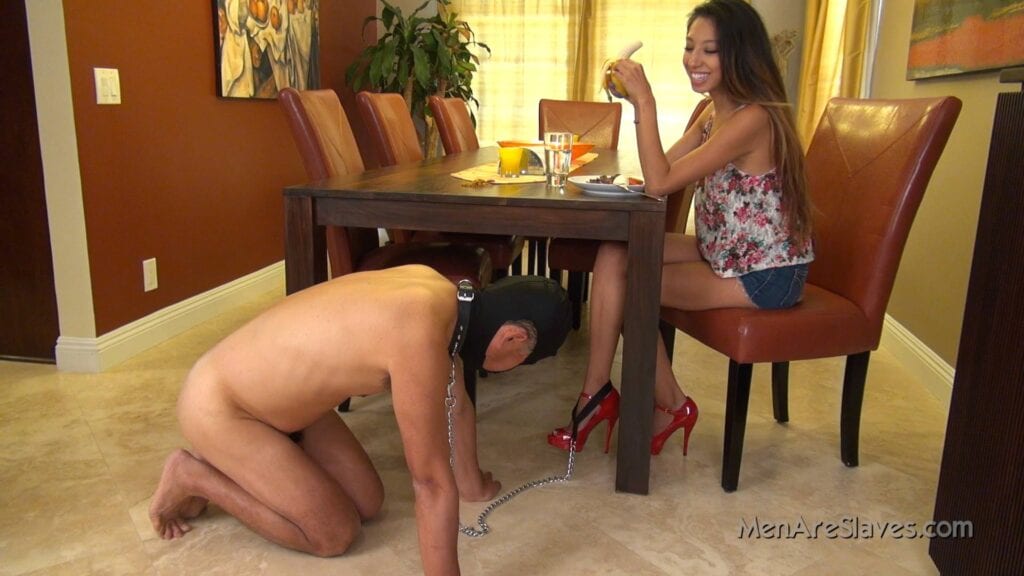 Danny began slurping up his soup (quite messily, I might add). I spread my napkin on my lap and spooned the vegetable-rice broth into my mouth. Delicious. I put the spoon down.

He looked up, soup dripping down his face, looking just adorable.

The practice of the new procedure

I saw a flash of disappointment on his face, but he said nothing.

He looked a little confused, poor thing. I gave him some help.

You are Released! That’s the same as ‘time out!

He stood up. His crotch was almost at eye level. I couldn’t help but notice there was a huge bulge behind the buttoned fly.

I reached out to caress his hard crotch, and I meant to say “time out” but the words that came out of my mouth were different:

He picked up his bowl, wiped his face with his napkin, and sat at his place next to me. I took his hands. I could tell he had this fantasy of a 24/7 slave status, constantly in a fevered state of arousal. I liked him being super-aroused, but I also liked him just being my guy. How else could I bitch to him about the stuff that happened at work? For that, we had to be equals. Besides, when he was a sub, he was sort of stupid. I like having a bright, handy guy around.

I like you being my submissive slave but it has to be on my terms, not yours!

He cleared his throat.

He looked down at his lap, lost in thought, and it appeared to me the bulge began to deflate, a little, anyway. Then he lifted his eyes to mine and said :

I leaned over and kissed him.

I brought his hands to my lips, kissed his strong fingers.

I looked at him playfully.

Always subject to my will!

He looked at me inquisitively, eyebrows lifted, inviting me to continue.

His face lit up with gratitude.

I felt a little mischievous.

He looked startled, but pushed back his chair and got on his knees, facing me expectantly.

Your first lesson is complete!

He dropped down, hands on the hardwood floor. Better, but that wasn’t quite it.

He turned to face me, prostrating himself, his forearms splayed on the hardwood floor. Better.

He got up and took his seat with a wry grin.

My Dominant Ex-Girlfriend Takes Control Of Me