Jessica was sick and tired of her human sex toy’s constant texting and whining. What had started out as sexy playtime and a welcome distraction from her hectic life, had quickly spiraled into an annoying needy “relationship“. She needed to put an end to it, and she knew exactly how.

The first encounter with her human sex toy! 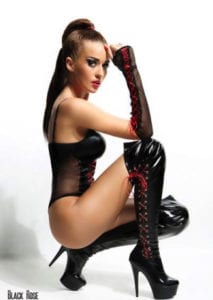 She had met him at the car wash, wearing her usual head-to-toe black ensemble, a fitted clingy catsuit, with a leather jacket and black high-heeled booties. With her omnipresent dark sunglasses, and hair pulled back into a neat ponytail, she looked all business.

Working on her iPad while waiting for her black Mercedes to be detailed, she glanced up and couldn’t help but notice the hot piece of ass as he walked past her to sit down in an adjacent chair. She eyed him up and down from behind her dark lenses, taking in his young fit body, nice hands, and tousled mop of hair. She exhaled and shifted in her seat to turn towards him.

Then, she pointed to his sports car with a lacquered nail, as she lowered her sunglasses to give him a piercing stare with her crystal blue eyes.

He smiled nervously and started rattling on about the car with nervous abandon. She just slid her sunglasses back up over her eyes and slipped a card with her number into the palm of his hand. With that, she got up and made her way towards her car, slipped into the black leather interior, vanishing as the tinted window rolled up. He blushed as he stared at the card. It was shiny black with an elegant red font that simply read, “Truth or Dare”, with a phone number below.

She summoned her human sex toy to a lounge hotel!

Of course, he texted within the hour. He didn’t know what to write, but he couldn’t let this opportunity pass him by. “Hi, it’s Stephen from the carwash.”

No reply. He checked his phone incessantly for the next few hours. As he sat at his apartment eating a slice of pizza while watching Game of Thrones, he heard the ping. Then another text came through. He eagerly opened the text from Jessica, and smiled, “Tonite. Midnight. Meet?”

“Yeah”, was all he wrote back.

She texted the address of a hotel lounge downtown. He completely forgot about Game of Thrones and got up to go get ready. His roommate laughed and asked him what the hell was so urgent. Stephen only smiled and said,

The Uber car dropped him off in front of the grand old hotel right at midnight. He pushed his hair off of his face, took a deep breath, and headed through the entrance towards the vast dimly lit lobby. Plush velvet furniture filled the room, and Persian carpets lined the floor. Across the room, he saw her.

Champagne, small talk, and then, an invitation to go up to the room!

Seated on a sofa, in a fitted short black dress, her long legs encased in black sheer nylons, she crossed and uncrossed her legs. He noticed the sky-high patent pumps gleaming. She saw him, and her eyes drew him across the room to her side. He inhaled her sensual fragrance, as she reached down to grip his strong thigh with a firm hand, her long flawless nails digging into his leg. He felt his cock get hard immediately. She slid her hand across his thigh, and up between his legs.

He blushed again. This woman was too much, he thought to himself. The waiter came over with a bottle of champagne and two glasses.

They sat drinking the champagne, making small talk. She leaned over and whispered in his ear,

Then, she stared hard into his eyes, and he was under her spell. She took his hand and pulled him close.

As soon as the elevator door closed, he pressed her against the wall, and slid her short dress up over her firm hips, gripping her ass and feverishly kissing her lips, neck, and shoulders. She moaned with pleasure and anticipation. Pushing him away, she told him,

Just a test for her new human sex toy!

The door opened, and she led him down the hall towards the room. It was much more than a room. The luxurious suite had a spectacular view and a full bar. She pulled him down the hallway into a vast bedroom, with a massive bed. Then, she playfully pushed him so that he fell onto his back on the bed, Then she climbed on top of him. straddling him, her dress slipping up around her waist. She was wearing thigh-high stockings with garters holding them up. And, he noticed, no panties.

Her perfectly plump pussy glistened, teasing him. His cock was throbbing with excitement.

He grabbed her waist, and she leaned down to stroke his cock. “

With that, she pulled her dress over her head and gripped his cock, slid it between her legs, and started to ride him, with only her stockings, garter, and high heels on. His pants were still around his ankles. She gripped his strong shoulders as she moved her hips up and down and began grinding and moaning with pleasure.

She leaned over and whispered into his ear.

They fucked all night. She pulled him out of the bed and told him she wanted him to fuck her in the bathroom so she could watch in the full-length mirror. They went into the shower, and he pressed her against the wall as the warm water cascaded over their bodies. She watched in the mirror as his long hard cock slid in and out of her pussy. She pushed him down to the floor, making him eat her out until she came over and over, crying out with ecstasy He performed like a machine, and she was pleased.

There were many more nights like this, and impromptu daytime meetings as well. She would text him and he would come running. However, she couldn’t recall when things changed, but she had not texted him for a few days, and suddenly she got a message from him,

She cringed. She thought the rules had been clear, but obviously, someone had gotten attached.

The neediness progressed, and as it did, she knew it was time to end this situation. She knew just what she would have to do.

Time to end this situation…

I bet, she thought to herself, rolling her eyes. With that, she walked into her all-white boudoir and started sorting through her lingerie drawers. Silky slips, bras, and teddies were tossed on the bed. She dug deeper and pulled out a few pairs of panties. Pink silk, red, black lace. All these panties, that she never wore. What a shame. At least she would make use of them tonite.

The doorbell rang, and she answered wearing a ruby red long fitted silky robe, with nothing underneath. She did have on her thigh-high patent boots, and they clicked on the floor as she took Stephen by the hand, and took him toward her bedroom.

He started to tug at her robe, but she stopped him, pushed him away, and told him to strip.

So, he obediently removed all of his clothes and stood there naked in front of her.

He began to protest, but she placed her other hand over his mouth,

She ordered him to do what she told him, otherwise…

He awkwardly took the panties, and stepped into them, pulling them up to his strong thighs, they stretched to just fit over his balls and large cock. The fabric pulled tight and he looked down to see how sheer and pink the panties looked. She told him to lie on the bed, face down. He began to protest, but he felt his cock getting hard at the same time. He moaned and complied.

Lying on his stomach, he heard her heels as she walked to the side of the bed, and forcefully grabbed his arm. He felt her binding his wrist and strapping it down. She then proceeded to tie his other wrist and both ankles, so that he lay there prone and unknowing what might happen next.

She smacked his ass hard, laughing out loud.

He began to protest some more, but she swiftly stuffed a ball gag into his mouth, and deftly fastened it around the back of his head. He felt his cock grow and the excitement surging within his body. Then, he moaned as he heard her unlocking a box in the corner.