It’s funny how in a moment of abject desperation, the world closing in on you, hope to flee out the nearest exit, and everything going to hell, a white flash of inspiration can stand the moment on its head. The game, if I understood Mistress Hunter correctly, offered me a way to stick a wildcard into her deck. “Gill!” I shouted out, “Fuck me. Don’t fuck the girl, fuck me!”

There was a pregnant pause. The room fell eerily silent like everyone had been frozen in place. Then Gill’s rumbly voice broke the silence. “Now why would I want to fuck your skinny white ass, boy?” “Because I love her.” “You what?” “I love her . . . I love Miss Lilly.” “And you’re willing to take my dick up your ass to spare her,” said Gill incredulously. I gambled on flattery, humor, and the truth. “Well Gill, the truth is, she’d probably prefer your big black dick to mine, but since I love her and you don’t . . . I’d just as soon be the one who breeds her.”

Getting Ready To Be Nailed By Gill

He chuckled. “Okay, brother, if that’s the way you want it, fine by me . . . Miss Hunter?” “It’s your choice, Mr. Peck . . . Mr. Thompson, hand Mr. Peck the tub of lard.” I sensed Gill moving into position behind me. I had a flashback to this morning, his massive cock sticking out of the cage like a single-barrel shotgun. I cringed; my asshole was so tight, it would take a hammer to drive a nail into it. I prayed ‘tub of lard’ meant Gill had been given some sort of barnyard lubricant. I waited in trepidation, hearing him lathering his cock, then stroking himself to his ten-inch glory. His breathing grew heavier by the second . . . but nothing happened.

“Ah fuck, I don’t want this skinny white ass, Mistress Hunter. Besides, I think this one belongs to you. How about I take one of those pretty boys down the line?” “As you wish, Mr. Peck,” said Mistress Hunter evenly, “the choice is yours.” I could hardly believe my ears. I exhaled, only then realizing I had been holding my breath.

You Shall Have Your Reward

With my head immobilized in the stock, I couldn’t see what happened down the line, but I sure as hell heard it; we all heard it. Gill had his way with one of the pretty male models. Call me a coward, call me what you will; all I can say is that I was glad it was him and not me. I hoped for his sake he was gay, and for all his protestations, deep down inside he liked it—if not during the act itself, then afterward, when it was over—the way I liked having been fucked by Mistress Hunter.

When Gill had spent his wad, Mr. Thompson led him out of the room, presumably to his cage until the ‘fuck-fest’ was over. Meanwhile, Mistress Hunter came up from behind me and caressed my bottom, then ran her hand up my spine and rested it on the nape of my neck. She cooed into my ear so that only I could hear, “That was a brave thing you did, Paul . . . you shall have your reward.” 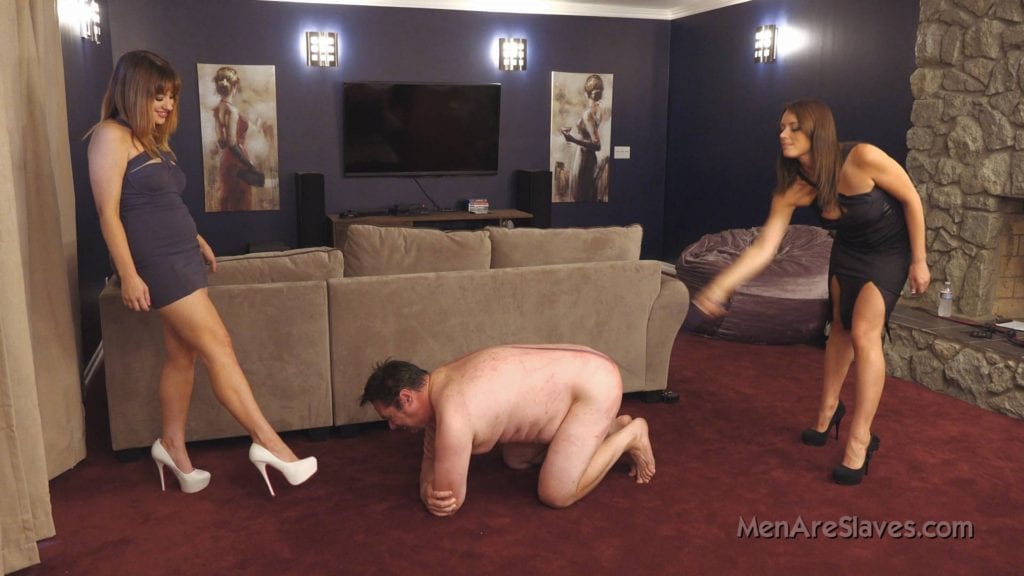 I Make My Way To Lillian

With that, she turned the latch and lifted the stock beam, freeing my neck. “Stand up,” she ordered, resuming a stern Mistress voice. I scrambled unsteadily to my feet, my legs feeling wobbly from the run. Mistress Hunter tilted my chin up so that I looked into her eyes. “Make your choice, Mr. Green.”

That was easy. Without seeking further permission, I made my way down the row to where Lillian crouched in the last stock. I dropped to my knees and caressed her back. “It’s me,” I whispered. She nodded her head silently.

At last, Lillian Packard, mine for the taking . . . only I had a slight problem: my dick was totally limp. Under any other circumstance, I knew I’d be as hard as a rock, but love can do strange things to a man; for some reason, my feelings for her translated into a powerful desire to free her, not fuck her. I didn’t know what to do. Should I try to fake it, pretend and hope no one noticed?

Mistress Genius Finds A Way To Make My Cock Hard

Just then, Mr. Thompson returned to the room. Panic filled me. My blood ran cold, only making things worse. What if he came over to find me kneeling behind his precious broodmare with my limp, pathetic dick? Who knows what would happen? Whatever it was, it would not be good.

To my eternal gratitude, Mistress Hunter saw my impotence and took command of the situation. “Give me your whip, Julian,” I heard her say, presumably to Thompson, who replied, “Yes ma’am.” A few seconds later, she stood behind me. The whip whistled through the air and landed on my ass with a resounding snap. I yelped; searing pain flooded my body.

The whip sliced through the air again, this time striking my back like a knife. I fell forward, my crotch landing on Lillian’s bottom, my chest on her back. The whip flew through the air a third time, searing the back of my thighs. I shouted out, my fingers involuntarily digging into Lillian’s waist; she screamed a yelp of pain and I let go of her, rearing backward. To my amazement, I saw my dick standing up, growing harder by the second.

Mistress genius. Her lashes kept raining down. “Fuck me, Paul,” Lillian begged. I reached into her cunt. My fingers came away wet—all the invitation I needed. My cock was fully erect now; I rammed it to the hilt, took hold of Lillian’s hips, and began pumping as a man possessed. Mistress Hunter continued lashing my ass, back and thighs. Pain and pleasure blurred—the pain of the whip and the pleasure of Lillian—I was soon reduced to a frenzy of animal passion, Lillian the helpless but willing vessel.