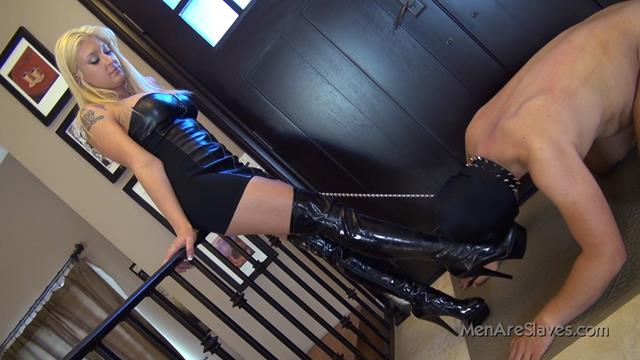 Amaury kissed with infinite respect the boot she held out to him. As he lay at her feet, he told him of his meeting, and someone knocked at the door. With a gesture, she motioned for him to rise again. “Yes!” A pretty and smiling female figure appeared in the opening of the door.

Amaury instantly fell at the feet of his sovereign.

The director obeyed, summing up the essential points. Suddenly the phone rang. She picked it up. After a few sentences, she turned to Amaury and, covering the microphone, said:

Frightened by the audacity of her order, Amaury obeyed, however, and stretched himself on the ground at her feet. While telephoning, Eva ruled her submissive in her veneration. She began by showing him her boot, which he immediately adored with passion, while she slipped her other foot under her shirt. After a while, she crossed her legs and invited him to lick her soles, then suck her heel. It always excited her so much. As it was hardly time to go further, with a movement of the foot, she put his face to the ground and rested her feet on his head.

The conversation lingered on, so Eva ended by dismissing him with a gesture. Amaury retired creeping, and it was only once he was in his office that he dressed.

A the end of the day, alone again in the office…

At the end of the day, Eva and Amaury found themselves alone again in the office. She called him.

– Get undressed and come immediately!

The director was far from having finished his day, and although very conscientious in his work, he had to admit that he was waiting impatiently for that moment. He obeyed and soon found himself naked at the feet of his sovereign. While he was running her boots with his lips, Eva said,

His lips then went up along her boots, and as he was about to kiss her under her skirt she ordered:

Then Amaury climbed up her legs, slowly, stroking her legs and kissing them here and there through her skirt. He lingered on her, pressing his lips long in veneration.

But seizing him by the hair, she invited him to continue. He obeyed, ran his hand through her blouse, then went up to her breasts, where he wanted to linger again. But he could not, for Eva had raised her head and leaned over to kiss her. During the kiss, she undid her blouse and stroked her chest. Only then did she invite him to embrace her beautiful breasts.

Suddenly, unable to stand, she raised her skirt, pushed her subject down, and seizing him by the hair, she pressed his face to her pussy.
He put his tongue on her lips, at first very gently, then with more and more passion … Eva had put her hands up on her breasts … She trembled … She moaned … Her thighs tightened around his face … The tongue D’Amaury was slowly turning around her love button …
She let out a cry … shuddered … arched back … again … again … She shouted …
Eva stiffened a few seconds, then relaxed softly, caressing the hair of her submissive. She was not yet filled … So, she turned and pressed his face to the hollow of her buttocks.
While stroking her buttocks, Amaury looked for her anus, which he licked long, long … Meanwhile, her hands were raised to her breasts, whose gently caressed nipples were hardened by pleasure. Eva began to gasp again.
Eva leaned forward-leaning on the desk, spreading her legs, and bringing Amaury back to her sex. She wanted to enjoy a second time … He licked her from behind, passionately, like a mad man … what she adored …
She became crazy … incoherent … The pleasure radiated to her belly … She felt herself coming … she came … It took her time to regain her spirits … She remained a long time shivering … She had rarely enjoyed so much …

A reward for the good submissive!

Eva sat down and put her dress in order. She felt satisfied, and considering her subject again prostrated very low in front of her, she decided to reward him.

After a look full of gratitude towards his sovereign, Amaury straightened up a little and began to caress. It did not take long to come and his seed lay on the boots of his sovereign …

Overcoming a certain repugnance, he immediately executed, and soon all trace had disappeared.

Amaury stretched himself on the ground, face to face, before his sovereign. Eva took her things. As she was on her way, she climbed over him, walked slowly… She enjoyed the situation particularly, for it was when she had her submissive under her heels that she measured all the plenitude of her power, She felt full, totally sovereign, and adored …

Finally, she descended between his legs and went out. He could hear her walking away down the hallway …