The testimony I am about to give regarding my first virtual domination session may disappoint some of the femdoming readers, but I still feel compelled to tell the readers how it occurred. I met this strong, confident young woman on a very well-known smartphone app. I let some time pass before I started a conversation with her.

This was the beginning of a very ordinary conversation but this was the first time I was dealing with such a direct Miss. So I decided to go further with the conversation in a cordial way.

I pause. There is something different about this girl. Something terribly attractive to submissives like myself. I’d trying to dig further by redirecting the conversation about me.

Did I Finally Meet The One? 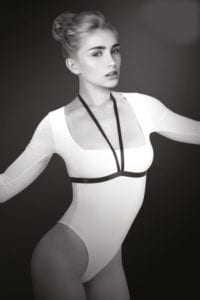 My world was falling apart. For a few seconds, I was in subspace, lulled by the idea that I had finally met this rare pearl. But I suddenly came crashing down after reading her response. However, the urge to know her was too strong, I felt compelled to continue to ask her questions.

In the following days, this little game between us continued and I was hooked. I won’t mention the dozens of messages we sent each other that led to the final phase of my submissive experience. The first of these phases in our game of domination came on a Wednesday night when she managed to control me completely. This night will remain engraved in my memory forever. Every night of the week, I was running like a well-trained dog to speak to her.

My whole body trembled. Never has a dominant woman spoken to me like this before. Then begins the virtual domination session. She orders me to send her a picture of my cock which adds to my excitement and I to forward it to her without hesitation and without thinking of the consequences (which are not the ones you think, but I’ll come back to that).

I was disappointed but obeyed her orders.

We continued talking for 15 minutes. Time felt endless and as each minute passed, I found it harder and harder to control myself. All of a sudden she said,

She controls my mind and body while I’m in this trance-like state.

The next morning, I woke up to see an email from the app I used to talk to my Mistress stating that the unauthorized sex images were removed. What I feared the most happened..our discussions were over. After creating another account, I tried to find her but I was not able to and she never contacted me again. This experience nonetheless allowed me to confirm my penchant for submission. All that remains now is finding the one Mistress I can submit to completely. I don’t want to dominate, I want to be the one dominated. Because what counts after all is not my pleasure but hers. I hope she enjoyed this experience as much as I did, and if she reads it, I want her to know that I am infinitely grateful to her.

How to Control Your Submale