Marian Arrives With Her Submissive Men

Anastasia lived alone, she had white skin, brown eyes, light brown hair, and a slim and attractive figure. She had been interested in dominating men for only a short time. It was in a chat room where she met Marian, a lady with dark brown eyes, straight black hair up to her shoulders, and a toned body. They quickly became friends and created a small closed group on Facebook for other dominant women where they met Ivonne, Jessica, and Cassandra.

Just as the clock struck 12:00 p.m., the doorbell rang. Anastasia opened the door and as expected it was Marian accompanied by three very attractive, submissive men. Anastasia opted to wear a white blouse with hip-hugger jeans and white sneakers, while Marian wore a strappy blouse and black pants with black tennis shoes.

Anastasia looked at the men standing in the doorway. They were all dressed in white shirts and black pants.

May We Serve You?

The three of them carried a couple of suitcases, and they all looked down towards the floor. Anastasia looked kindly at the three boys,

Then Marian took her friend’s shoulder interrupting her,

The three of them got on their knees and took a position of submission, kneeling with their faces to the floor, arms extended towards the front and palms up,

The three boys spoke, strongly and clearly without losing posture.

Anastasia could not believe it, she looked at her friend who had a mischievous smile and felt compelled to give the submissive men an answer. She stood in front of the submissives and said in an authoritative voice,

Anastasia was very pleased by her friend’s words and she said,

She did not even blink before the three submissives stripped as fast as they could getting completely naked. The only garment they wore was a pink dog collar around their neck and a plastic chastity cage. All three had very athletic and attractive bodies without any hair on them. They put their clothes in a suitcase and quickly started arranging the living room for the demonstration. They arranged the sofas in the room so the ladies could see the demonstration in the most comfortable way possible while another submissive ran to the kitchen to prepare some food and drinks.

After an hour of chatting, the other girls finally arrived. Anastasia was going to open the door as usual when Marian stopped her. One of the submissives opened the door and received the three missing ladies. The three of them had just finished their Pilates session and were still wearing their workout clothes. When the submissive men opened the door, the ladies were staring at them with their mouths open. 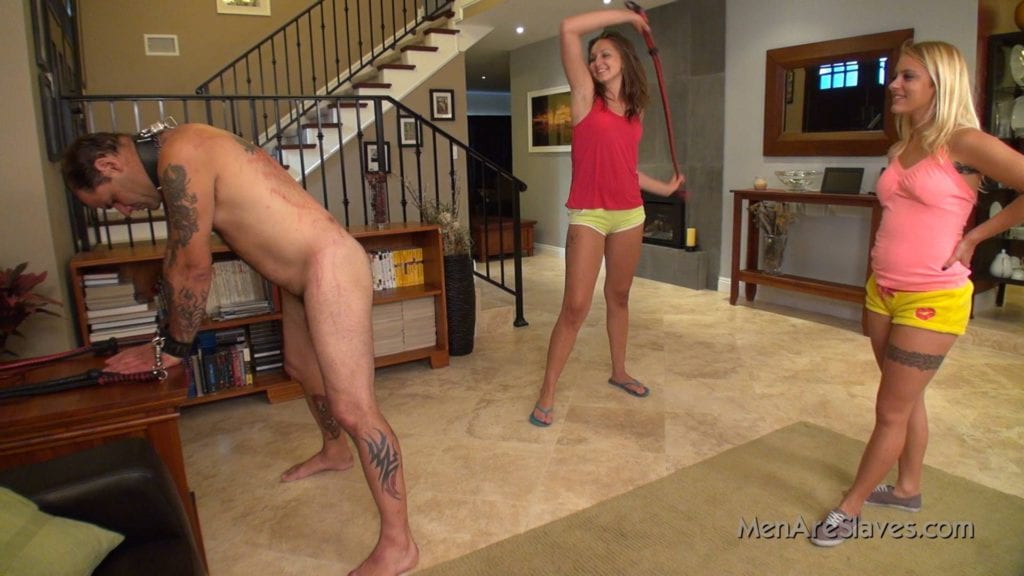 The Submissives Grab A Tray With Accessories

The dominant girls sat on the sofa arranged like movie seats. The first thing they saw was a video about fetish clothes for women and fetish accessories, in addition to very sexy lingerie and fetish shoes for all occasions. While the girls watched the video, the three submissives offered some food or offered to massage their feet. At the end of the video, Marian stood up in front of her friends and rang the bell,

The girls were hesitant at first. Anastasia took a paddle with a heart-shaped opening, looked at the submissive carrying the paddles, and said,

Leave Them In Their Cock Cage For A Month

Anastasia somewhat clumsily hit the buttocks of the submissive,

This time, Anastasia hit his butt much harder and the submissive thanked her. Anastasia stroked the buttocks of the submissive and gave him another blow. The other girls started spanking their submissives with accessories and each of them thank the ladies accordingly.

Marian rang the bell to stop the blows. Immediately, the three submissives kneeled in front of the ladies with their hands on their backs. Marian displayed the last item in the collection, three remote-controlled electric shock cock rings. Marian had each submissive put these rings on their genitals. Anastasia asked for help to place a set of handcuffs on each submissive.

The lady pressed a button and one of the submissives felt the electric shock but tried not to scream.

Marian increased the current of one of the penis rings to answer her question. She passed the other controls to the girls for them to test, and just as she planned, the three boys ended up moaning in pain due to the inexperience of the dominant girls.

Marian returned with her friends and the dominant girls were browsing the catalog looking for items they wanted to buy,