My Relationship With My Dominant Female

Man, that hurt my pride a bit and I felt embarrassed.

And 2 minutes later it was over. I was caught between her thighs, face down on the bed, my left arm also immobilized in that scissor hold and my right hand trying to keep her from grabbing my balls, but she was persistent and took a grip on them and pulled on them.

I quit struggling and she took that opportunity to shift her weight on top of me and jam her foot right into my face. Then, somehow, a whip was in her hand and she was whipping me, hard and steady and I couldn’t believe how much it hurt! Instinct set in and I bucked, shifted, and struggled to get loose and, if anything, wound up even tighter in the position I was in. Now, both her feet were working me over, foot slapping me, roughly shoving her toes past my lips and into my mouth. And she whipped me with more exuberance than before and still had my balls in her grip.

I licked her feet with an urgency to comply and please her, sucked on her toes, tongued between them, concentrated on the task to take my mind off of the severe beating my ass was taking. I heard myself begging, begging! Her to stop hurting me, that I’d do anything,

Then I just stopped, went limp, exhausted, and just took it. It was like a knockout, I mused. I was still conscious and I’d catch a glimpse of her face, her cute little angelic face, and I just saw pure determination, steely resolve to break me in her eyes.

And finally, I just calmly said,

And she stopped, like coming out of a trance, rolled off of me, and stood up, looking at the damage she had done to me. She let the whip drop to the floor and just said

What did I feel? I didn’t feel shame like I should have felt… humiliation? No, I was past that. Angry? Vengeful? No. I just felt owned, conquered, resigned to whatever fate she had in mind for me. My dick was as hard as it could be. I wanted to close my eyes and sleep forever. Before I did, I saw her standing In the doorway, looking at me, then at her hand.

that’s all I can remember until I woke up several hours later. 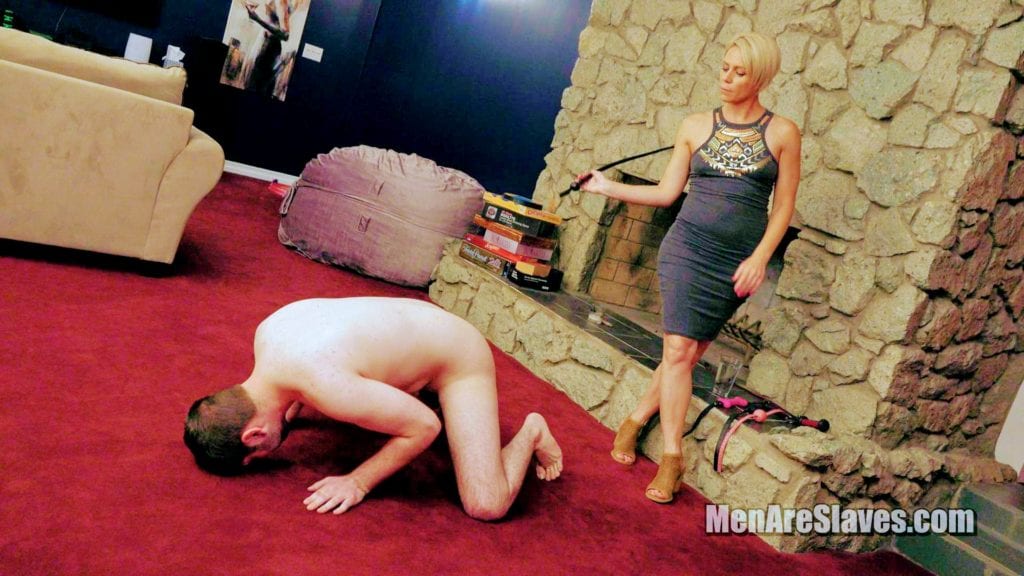 She walked in, saw I was awake, and sat down beside me on the bed.

I admitted I did while wondering what the fuck happened to my manhood. This was confusing me, the way she so easily dominated me physically. I had a quick impulse to lunge at her and show her I could beat her if I had to, but I chickened out. Actually, I was afraid of her, and I realized that it felt good, comfortable, to fear her.

I was afraid of the answer, wondering if there was some kind of slave event she was entering us into. There wasn’t and I thanked God for that, not knowing an event like that would have been a blessing compared to what I was actually in for.

Breaking Submales For The Gynarchic Community

Here is where I should rightly just refuse to be used in such a manner, get up, get dressed, and run for the door when I see a chance. This is the craziest thing I’ve ever heard. If I have to fight my way out of here, by God, I will! But I have to play along to make her think I am resigned to my fate. I ask her what happens if I mess up and embarrass her?

She said this while doubling up her fists.

I thought “Well since you put it that way.” A strange calm set in, my resistance seemed to melt away. I thought about all the things I needed to do to free up my schedule for the next few weeks. And I felt the excitement I hadn’t felt before. I had fantasized all my life about being enslaved by a beautiful Femdom warrior but never imagined it was feasible, much less, inevitable. Sure, it would be hard, and sure, there would be a pain, but it felt like coming home. My dick was standing at attention, I realized. And she noticed too and smiled. She gripped my shaft lightly as if to show her appreciation, I thought. Then grabbed my balls and squeezed and laughed out loud as I involuntarily screamed out to Jesus to kill me now.