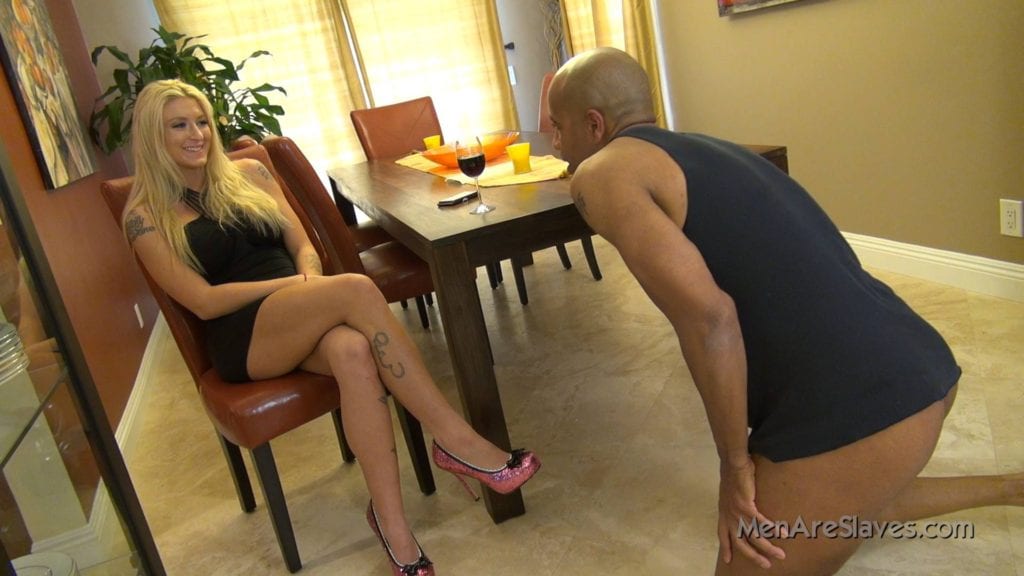 Stacy would manage the business while George, her submissive husband, would make the ice cream at night. Stacy decided to hire a couple of very attractive young men to work as waiters in that establishment. “I thought I would be your waiter,” George said but Stacy slapped her submissive husband and said, “Don’t worry, I have a job for you, you won’t have to wait tables dear,” said Stacy proudly. In the early morning, she showed her submissive husband his new job. He would pull the ice cream cart around town like a rickshaw, Elenor, the college student Stacy hired who was the mayor’s niece and looking for part-time work during her summer vacation would assist in selling ice cream and promoting the store.

The two ladies put George on his knees and placed a bridle on his head and hooked him to the front of the cart as if he were a donkey pulling the cart while the two waiters loaded the cart with ice cream. The cart had an umbrella and a seat so Elenor could sit and guide George around town. Finally, they attached a container on the side of George’s head that had a sticker saying, “Tips are welcome.” “You better hope the container is full of tips when you return dear, ” Stacy said, stroking the shaven head of her submissive husband.

“Do you need any help with him?” Stacy asked the young woman, “Nope, my specialty is female domination of submissives with pony play,” said Elenor, very sure of herself. Just before noon, Elenor mounted the cart and guided George through the streets of the town, sitting down holding the reins with one hand and while the other handheld a whip which she used to lash the submissive husband. They got halfway through the town when a female police officer stopped them. “Name and registration please?” Elenor showed her the documents and the female police officer reviewed them on a tablet she was carrying and then took a scanner and scanned the barcode on the collar around George’s neck.

“Looks like everything is in order, you know I have to check all our new community members,” said the police, caressing George’s buttocks and then giving him a slap on one of his cheeks. “Give me a vanilla ice cream cone please,” she said while she looked at George. The chastity belt you have comes with a urethral tube. You must have done something really bad,” she said chuckling while she stroked George’s testicles, “Your wife did the right thing giving permission to mistreat you,” she said while Elenor looked at her amused.

Once they arrived at the town center, several ladies approached the curious wagon. “Stacy’s organic ice creams,” Elenor said on a loudspeaker. “Handmade with natural ingredients.” Several ladies asked for a cone for them and Elenor received great reviews about the ice cream. Others decided to visit the parlor while the rest stayed in the park to eat more ice cream. They even decided to share ice cream in a bowl amongst themselves.

During the remodeling, the ice cream parlor opened to serve the guests that were excited about the creamery being in town. The shop had very comfortable small tables, a bar with benches, and behind it an old brass coffee machine. Stacy brought it from her hometown to prepare organic coffee every day. Outside, there were posts where a young woman was tying her submissives to it and putting dog bowls on the floor for them to eat. The visitors could leave their submissives there while they were inside the parlor. The two submissives hired to be waiters did their work quickly and efficiently. They wore no clothes except for a bow tie around their necks and a small bell attached to the thong chastity cage they were wearing.

All the ladies appreciated the muscular bodies of the submissive waiters and left tips for them in a container located on the side of Stacy’s cash register. After one o’clock, Athena, the town mayor, arrived at the parlor. She arrived accompanied by a pair of submissives wearing spandex masks that covered their heads. Athena tied them to the posts and poured some water into their bowls. She came in and sat at the bar. “Good afternoon,” the mayor greeted the owner of the store.

“Good afternoon Ms. Athena, what can do for you?” The mayor looked at the menu and asked for floating ice cream. “Yes, the business is very nice, just as you proposed it to the council,” the mayor admired the venue without taking her eyes off the two waiters. “Exactly as I said ma’am,” Stacy said, before she continued to speak a message arrived on Stacy’s cell phone. Stacy looked at it and quickly gave an answer. 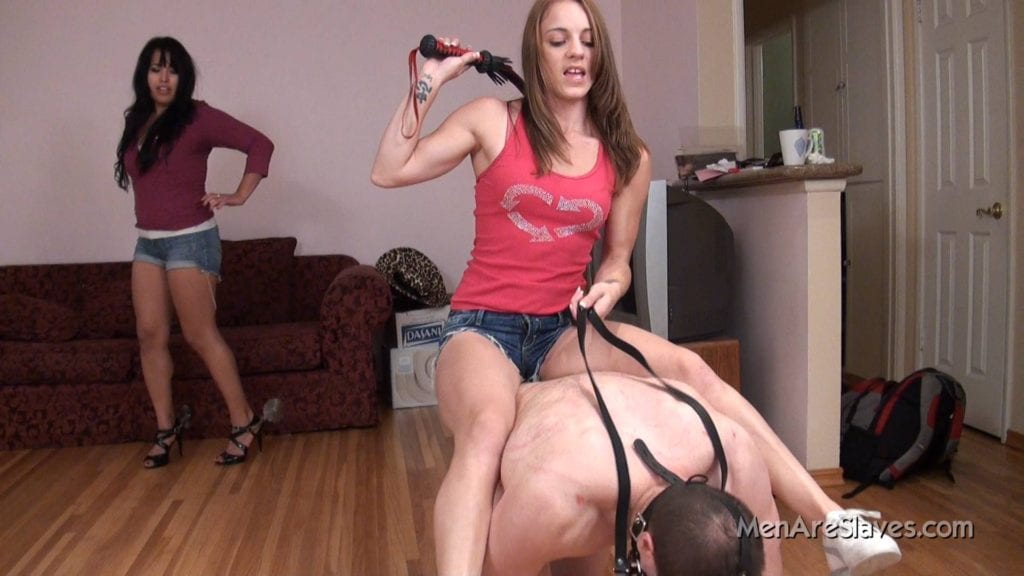 Request To Go To The Bathroom

One of the waiters took the mayor’s order and she took the opportunity to smack the waiter on the ass. “Thank you very much, ma’am,” he said before returning to work. Stacy looked at the mayor and said, “Excuse me, mayor, it was your niece, she told me my submissive husband is asking to use the bathroom.” Stacy showed Athena a video of George on all fours caressing the lobe of his left ear. It was the signal to request to go to the bathroom. “Very good idea, so as to not disturb anyone. What did you say?” Stacy looked at Athena with a mischievous smile, “Wait 25 minutes, then let him go to the bathroom, don’t forget to remove the urethral tube. I like him to relieve himself at the same time so there is no time wasted.” Both ladies laughed and continued chatting.

The Encounter With The Beautiful Police Officer

When George started relieving himself, he heard someone walking in his direction. It was another female police officer. She had followed him to the bathroom and walked to his stall and approached him while he was still in this position. The police officer scanned the barcode on his collar and went back to check her information, “Don’t try to escape your pathetic excuse of a man,” said the beautiful female police officer. George, terrified and unable to speak, lowered his head and rushed to finish relieving himself.

The officer took a leash and put it around the submissive’s neck, “You won’t mind if I take you back to your dominant woman, will you?” George lowered his head. When he was finished, he was guided by the police officer to the sinks. Instead of a mirror, there were precise instructions to wash his hands and other parts of the body, which George followed to a “T” while the office watched.

When he was done, the police officer took George, on all fours, to Elenor who was waiting for him sitting in the cart under the umbrella. The officer attached the submissive husband to the ice cream cart. “Is something wrong officer?” The girl asked while she raised her whip, “I found him unsupervised in one of the bathroom stalls,” said the police officer. Elenor placed a plate of food and a bowl of water on the floor for George to eat. While George ate, both dominant ladies chatted. “I don’t know him so I followed him to the bathroom. What caught my attention was that he wasn’t using his urethral tube attached to his chastity cage like his documents indicated.”

Elenor then showed her the chastity cage. “I took it off so he could use the toilet. His wife told me that he will wear it when he returns.” The police officer agreed and kicked George in the stomach before leaving them. “So that you learn to behave,” said the police officer before she finally left. At dusk, Elenor and George went back to the parlor. Once they arrived, Elenor gave the container with the tips to Stacy. Stacy put the chastity cage with the urethral tube on George and counted the money earned from a day’s work while the waiters cleaned the premises.

“We made good money today,” Stacy said sitting in a chair facing Elenor. George was under Stacy’s desk giving her a foot massage. “They really liked the ice cream, they even asked if we could cater some parties in town.” Stacy thought for a bit, “Maybe next month we can give start providing catering services, I also thought about offering cakes made with ice cream.” Both talked for a while about the business and Stacy paid Elenor for the day. The girl left and Stacy was left alone with the three submissives.

Stacy was going to take the bridle of her submissive husband but stopped suddenly, “I better leave it on you, I like it when you’re quiet,” said Stacy and guided her submissive husband to the basement to make ice cream. “Make the list of flavors that we need for tomorrow and then you can rest,” said Stacy and left her husband to work. Stacy went to see the two waiters, whom both did a great job collecting tips and she would send the payment to the dominant ladies that owned the submissive men.

Stacy Rewards The Waiters For A Job Well Done

Once inside the guest room, Stacy sat on the bed and both submissives came to lick her feet. “That’s fine,” she said while playing with a pair of keys that were on a gold chain she wore around her neck. “Let’s see what the two of you can do.” Stacy removed their chastity cages and started lustfully rubbing their penises which became rock hard. She put one cock in her mouth while still rubbing the other cock. Both boys moaned in pleasure and pain while Stacy enjoyed seducing them.

The Submissive Husband Sleeps On The Couch For The Summer

“Honey, for the rest of the summer you’re going to sleep on the couch in the living room.” George looked at his wife in astonishment and saw both submissives rubbing each other’s penises on the bed. “Whatever you wish, Stacy,” they both said while continuing to give each other pleasure. “You see darling, they are younger, more attractive, and much more virile than you are. Are you really going to stop me from being with them?” she said before closing the door.