Chastity Sissy Boy Is Turned Out By Mistress

An Evening My Chastity Sissy Boy Will Never Forget 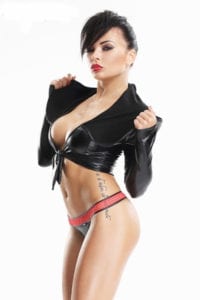 He glared at me and I told him to undress, “Now drop trow!” I said to my future chastity sissy boy and I could see he was hard as he dropped his pants. I stood up and circled around him. His eyes shot down to my ass and I said abruptly, “Look up.” He was shocked by this as I circled him in my heels, “You like what I am wearing?” I asked, “Actually I know you do, your pathetic excuse for a prick is hard. But that’s not a dick, that’s a sissy pussy, you just forgot our Femdom rules.” I could see him getting nervous.

“What rules Mistress?” he asked. I slapped his face, “No talking, you refer to me as Goddess now,” saying this as I smacked his hard cock. I quickly reached over and grabbed a box from the counter that held his present. Pulling out his present, I saw his eyes go wide, “This is where I will have your pathetic prick locked, in this tiny little plastic chastity device. You see you don’t get hard without me saying so, I make all the rules now.” His dick was still hard but I had a solution, “Hands behind your back, NOW move. Perfect,” As I clipped handcuffs to him and attached him to the exercise equipment pull-up bar, he could not get loose and was standing there with his dick hard.

I didn’t blame him: I looked so hot in this outfit. I grabbed the ice water and sank his hard cock in the ice water. His dick went flaccid as he screamed. “Shut up, you baby.”  I took some lube and snapped the chastity cage in place. I took the key to his cock and put it around my neck as I moved my hair. Turning around, I pressed my perfect butt onto his stomach with the chastity cage right between my cheeks. I wanted to tease him because he shrunk so much and wanted to see his lust as his dick grew in the chastity cage . “Oh chastity sissy boy, want me to drop my panties? I hope you aren’t thinking about fucking me?”

I Want To Fuck You Goddess

“Yes, please, just let me down and out of my cage Mistress.” I turned around quickly and was eye level with his dick. I could see it worm it’s way until the tip came in contact with the end of the short little tube. This was thrilling as I looked up I could see my boyfriend trying to look down my bra, “Oh what, you like these?” “Goddess please let me out my dick hurts so bad, I can’t get hard…”

“You don’t deserve to get hard like a real man, because you are just a pathetic chastity sissy boy. This is what you wanted isn’t it.. for your girlfriend to have all the power in this relationship, right? Well, now I say when your dick gets hard.” He looked unsure as I  smacked his chest hard and stared in his eyes.

“Wait here,” I said laughing as I ran upstairs and came down again. “A chastity sissy boy has to wear sissy clothes.” I pulled out a pair of blue lace panties and thong and came back downstairs. I pulled them up his thigh, then I put a little mini skirt and my Velcro halter top on him. It fit him nicely. Then the final touch, a wig that had been sitting around and a little make-up. I hardly recognized my boyfriend, he looked like such a pathetic bitch. “Mistress, since I have been so good, will you please let me fuck you?” 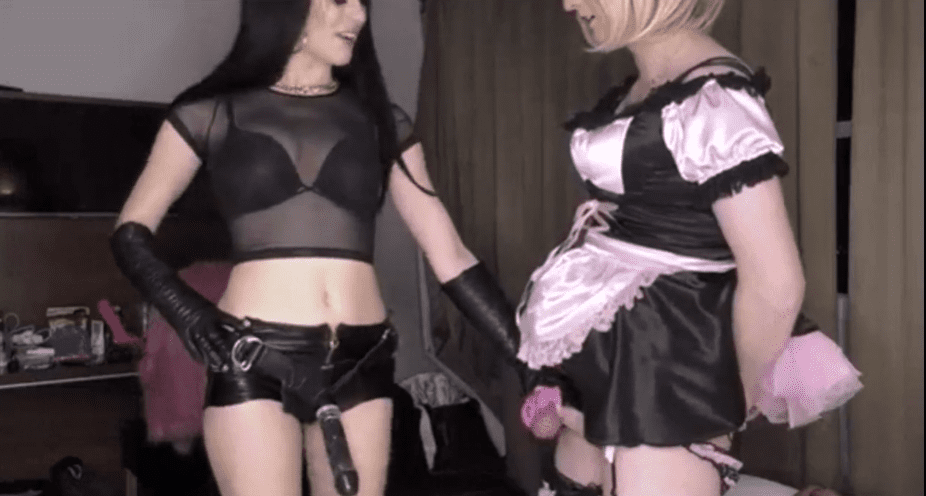 We’re Going To Have Some Fun

“Fuck me,” I said, as I lifted his skirt to reveal his cage covered by the panties, “I don’t see anything to fuck with, all I see is a pretty sissy pussy from a sissy chastity boy.” I leaned into my boyfriend and stuck my hands down to his ass and pushed the top of my sloppy wet cunt on him. I rolled my head on his shoulder and coldly said, “I don’t get off with girls sweetie, only big veiny, man dicks. I like to ride it nice and hard.” I massaged my clit with his chastity cage as I could feel the plastic inside my pussy and the warmth from his cock inside the cage. “This is a sissy dick and I will never, ever, ever fuck that pathetic thing again….”

“But Mistress,” I cut him off, “But nothing.” Now, we are going to have some fun”, I said as I stood inches from his face. I could feel the tip of his dick enter me. “You wanted to fuck, we can fuck.” I went to the counter and got a box. From inside the box, I pulled out a belt and wrapped it around his waist. I reached in the box and said, “Honey, since your pathetic prick is way too small to please my pussy, I got something that will satisfy me,” I saw him blush as I pulled out a large black dick.

No Pleasure For You

I brought it to his face, “See, this is a man’s dick,” I said as I held it near his cage. “This is what a woman needs to get off on.” I inserted it into the ring under his skirt. “Now we are going to fuck!” Grabbing his leash, I unlatched his restraints and went to the couch. I imagined he looked pretty pathetic wearing a dress with a rubber man-sized dick strapped to his waist. Putting the lube on his dick, I pulled the head close to me, “You do what I say,” my pussy was so wet, I don’t think I even needed the lube.

I dropped my panties and looked at the horrified look on his face while letting him inside of me. The feeling of it entering me was invigorating while I pulled on his leash while he was inside of me. I turned around and grabbed his chastity cage and said, “This pathetic fucking sissy pussy getting hard hun, it’s too bad you get no pleasure sissy chastity boy, dressed like a sissy slut pleasing your mistress’ pussy like this. So close to fucking me, now fuck me.” He stroked, there was a plastic sound, I couldn’t believe it but it was his caged dick hitting my pussy as he stroked, “You are such a fucking pervert, fucking your Dominatrix in a dress. 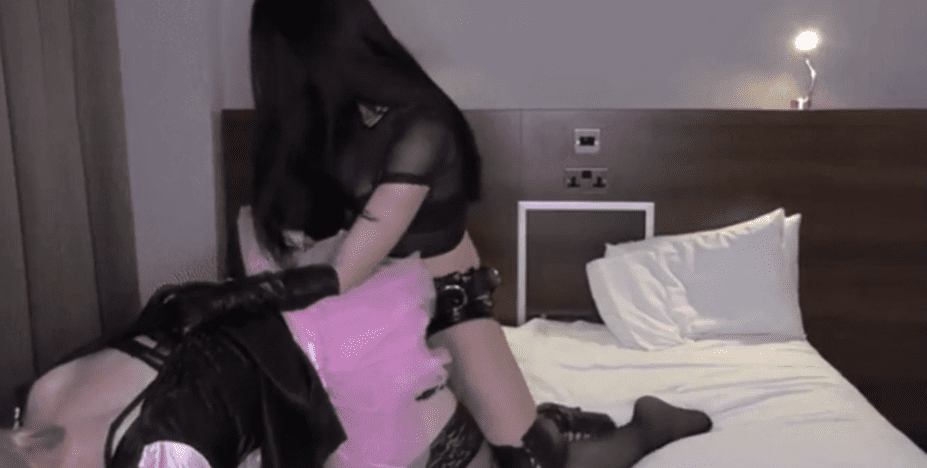 “Anything you say,” I continued to grind on the dildo. “Well fuck me good now, and you might earn it.” He grabbed me and started to thrust and it felt so damn good. I said to tease him more, “You are no real man, you are my little sissy, no real man would ever agree to this level of humiliation, your just a fucking pervert sissy slut.” I couldn’t take it anymore, I got on top and grabbed his face and came hard. I stopped and took the dick off his waist and put it around my waist, “Okay time for us to fuck.” He complained and pleaded, I slapped his ass and made him bend over.

His Point Of View

She wants others to see how we actually fuck, her dick up my ass, my dick locked in chastity. I love it, it’s our secret, but I have no choice, she wants to do this and as a sissy bitch what happens in our relationship is her decision. Until we arrive at the sauna, I plead to her that I don’t want to be exposed here, but this is thrilling for her and the fear of getting caught in such a kinky way lights her up. She drops my towel and you can see through the plastic cage my dick wants out. She smiles and tells me to turn around and sit in her lap. I plead, but she grabs my face and sternly says “Now, sit on this dick.”

They giggle and say, “What kind of man is this?” I’m so embarrassed as the two women laugh. “He is a sissy chastity boy, I’m his Mistress, this is a female led relationship.” One lady speaks up and says, “But how do you get off then?” “Good question,” Mistress says. He eats my pussy and he’s so desperate to fuck me from his chastity that he does a great job.” The women look shocked and their nipples harden. “Want to try?” The girls hesitate, but one girl drops her towel to reveal her nicely shaved pussy. Mistress smacks my ass and commands the girl to sit on the bench and spread her legs. She tells me to bend over and lick, then moves my head to her cunt, but keeps her cock in my ass. The stranger moans as I lick her.

Doggy Style In The Sauna

2 thoughts on “Chastity Sissy Boy Is Turned Out By Mistress”