This should be in the chastity stories. Carol and I had been dating for a little more than 18 months when I finally got up the nerve to ask her to marry me. She agreed, holding me tight, and kissed me, at first gently, then more passionately, teasing me with her lips and tongue. She is a great kisser, I can assure you. But Carol came from a very conservative, church-going family, and our sex life had consisted of a lot of passionate necking and my wandering hands, but she had convinced me that we should wait until our wedding to learn the joy of sex together.

Weeks rushed by in a blur, and finally, the big day arrived. After a great ceremony attended by most of our friends and family, we set out for our honeymoon week, a rustic cabin complete with a fireplace, king-size bed, and a hot tub. I was crazy with anticipation. Carol has full, firm breasts and a small waist, but it is her butt that really stops traffic- perfectly curved, she looks fantastic in a tight pair of jeans. I think she wore her tightest pair that day, to whet my appetite!

After supper, she suggested that I get into bed after I had removed all my clothes. I was a little disappointed that SHE was not going to strip me, but then I remembered that she was very shy. I was about to get the surprise of my life.

“Michael, would you be upset if I suggested we do something- well, something some people might call kinky?”

I got about twice as hard while stammering something like, “No, Honey, what did you have in mind?”

With a sly smile, she reached into her purse and pulled out not one, but two pairs of handcuffs. They had been a “gag” wedding gift from a friend at her bridal shower, but she intended to put them to use.

I eagerly agreed, and she quickly cuffed my wrists to the head of the bed. She then said she would be back in a moment after she changed for bed. I expected her to return in some sort of lacy nightgown; my eyes almost bulged from my head, though, when she came out of the bathroom wearing black fishnet stockings, high heeled black ankle strap shoes, black garter belts, and long black arm stockings- and nothing else. Her breasts were magnificent, her body stunning.

What followed was an unbelievable night of sex. She kissed me and used just one hand on me to keep me hard for what seemed like hours, saying how much she liked her new toy. I was stunned when she massaged herself with my shaft and came twice, while I was still throbbing and without relief.

She ran her hands over my handcuffs, making sure they were secure, and then went back to her slow stroking, driving me crazy. Finally, she mounted me and rode me slowly.

When I began to thrust up to her, she would just slide off. “Hold still!” she demanded.

“I’m in charge here- I’ll say how fast, and when you finish. Start that bouncing around again, and I’ll go sleep on the couch- and leave you here.

I awoke the next morning to the smell of frying bacon. My hands were still handcuffed. I was starting to get a little annoyed- I needed to take my morning trip to the bathroom- but she insisted on serving me breakfast in bed. Since I was still handcuffed, she fed me- it was very hot because she was still wearing only stockings and heels. Then she got a really serious look on her face and began to speak.

“Michael, have you noticed how happy my parents are? Don’t you wish our marriage could be like theirs?”

I had to admit that they seemed like the perfect couple. They were always smiling and laughing together and seemed very close. Her Dad seemed to always be doing some little thing for her Mom- shopping for her, helping clean the house, going on errands, etc.

“Mom told me the secret of her marriage. She has always been the center of Dad’s life because she has made certain that she would always be the most important person in his life. My grandmother went through a terrible divorce; my granddad had an affair with her, and Grandma never got over it.

Mom was determined to never let that happen to her. That’s why she took certain steps to make sure her husband would be faithful to her. I intend to take those same steps as you.” By now I was really confused, but nothing could have prepared me for what happened next. 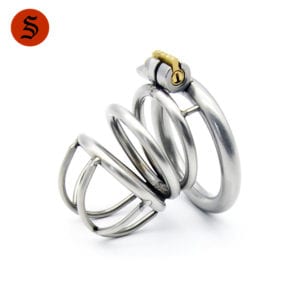 Carol reached into a box I had not noticed before and removed an SSL Chastity Cage. (I have read some chastity stories and I knew it was some sort of chastity device, but I had never actually seen one before.). She informed me that she was going to lock the device on me, and if I really loved her, I would submit to her control of my sex life.

She assured me that she would remove the device every night, so it did not seem too bad. After some trial and error, she settled on the 45″ ring and locked the device on. That night I eagerly looked forward to having the device removed for another night of torrid lovemaking.

She grinned at me and said, “Sure, I’ll remove it- and soon as your hands are chained to the head of the bed.”

When I began to protest, she just said that her Mom had been cuffing her Dad to their bed since their wedding night, and she intended to do just the same with me.

“Of course, you don’t ever have to be handcuffed, if you really don’t want to. But I won’t take the CB off unless you do. Handcuffed the Cb comes off; no handcuffs and it stays on. Your choice!”

I reluctantly agreed to the handcuffs and was soon chained securely to the bed once again.

Carol removed the CB, stiffened me, straddled me, and began a long, slow ride. I was warned not to move- there would be no orgasm for me if I did- so I remained motionless, throbbing, while she slowly slid up and down on me. Sometimes she would stop, slide off me, and then use my member to massage herself to a long, slow orgasm, telling me how good she felt, before remounting me. I only came twice that week, but she came several times each day.

She now has total control over me. The CB is very secure and escape-proof. Evenings find me doing most of the cooking and cleaning. I must always spend at least 30 minutes between her legs. Licking her until she comes at least once, but often twice.

Then it is off to bed. The routine seldom varies. She likes to strip me naked, which makes me ache inside the CB. Then handcuffs me to the headboard, and the CB is removed. Most nights she just stiffens me by hand keeps me hard for a while. Kissing me, and then massages herself with my staff until she has another orgasm. Then she rolls over and goes to sleep. I am left helpless and hard, just the way she likes me. Morning comes and the CB is reinstalled before the handcuffs are unlocked.

If lucky, I am allowed an orgasm a week, but I have gone as long as three weeks without one; if I displease her in any way, she delays my pleasure as long as she wants. It is a rare day, though, when she does not cum at least once. She likes to say that on our wedding day, she put a ring on my finger. But early the next morning, she locked a more important ring around my balls. And she intends to keep it that way. I still love her- but I never dreamed I’d wind up as her sex slave.