Tips For Submissive Men Looking For A Dominant Woman

A Few Words To All The Submissive Men Out There

The other day, I was going through FetLife and came across a post by a Female Dominant about the frustrations She has had with submissive men who immediately begin to call Her “Mistress”. I decided to write a post about the experiences I have had, figuring that there may be submissive men out there who may not know how to approach a Dominant Woman and so I figured I might offer a suggestion that could help you break the ice and not look like well… such a dumbass.

As far as honorifics go, if you are contacting a Female Dominant on a website, (FetLife, Collarspace, or even Slave Selection) do NOT start out by calling Her “Mistress.” As I learned after the first time I did it to a lifestyle Domme, that is a title you EARN the right to say. That’s right, you read it correctly, YOU EARN. Not that She earns, YOU earn. How that happens all depends on your Dominant as to what that entails, it could take months, years, or never, but starting off the bat with that is just bad form.

A Women Dressed In Black With A Whip In Her Hands 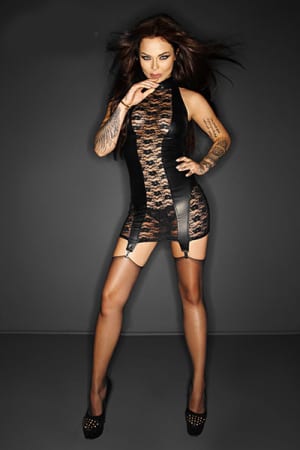 Also- get ready for some heartbreak here, fellas- you may have dreamt, as I did, for years of finding that special Woman to call, “Mistress” and you find Her (or She finds you) and lo and behold, your dreams are dashed because She finds the term off-putting. Guys, many do. Have you ever looked up the word? One of the first definitions is basically of being the ‘other woman’ and many Dominant Women don’t want to be ‘the other woman’. They want to be THE Woman. Want to see what I mean, google “Synonyms for Mistress”. You’ll find a host of rather unsavory words.

Also, Mistress has taken on kind of a porny ring to it. When we hear the word, we immediately think of a woman dressed in black leather and wielding a whip, right? Some women may not want that image in their head, because they may not be able to, or for that matter, want to, live up to it. So what do I do if I see a profile that I like and I want to drop her a note?

Well, you could just try using her username, or just Miss or Ma’am to begin with, but ASK! When I used to contact Dominant Women and I would drop a quick introductory note and I would ask Her what She liked or preferred to be called. Remember, you are there for HER. You want to show Her that you are concerned about pleasing HER, so finding out what She prefers to be called is a good way of doing that. So remember, fellas, ASK. But…but… I want to call her Mistress.

Really? You get that FEMALE DOMINATION means that the FEMALE is in charge, right? Just saying. Also, as far as capitalizing Her, She, and You, some Women are cool with it, others, are not. Just ask. Remember you are there to please HER, so do what SHE wants, not what your libido is screaming out to do.

Oh, and speaking of your libido, you may, when you first contact a Dominant Woman, be tempted- because of your raging libido- to send them a picture of your penis. DON’T! Ok? DON’T! But…but my penis is special….No, it’s really not, and guess what, guys, THEY’VE SEEN THEM BEFORE! It’s not like you’ve solved a mystery for them, and, you’re not impressing them. For a lot of Dominant Women, it’s not about the size of a man’s cock, but the strength of his heart and the openness and willingness of his mind. It’s about your level of submission, not the girth of your loins. That’s how a dominant woman becomes your dominant wife.

Seriously, talk to a Dominant Woman for about .3 seconds and you find out they are INUNDATED with ‘dick pics’. Be the standout. Be the one whose words attract Her. Look, in my humble opinion, it shows a complete lack of respect and you want (or at least you SHOULD want) to show them the utmost respect. Remember, you’re the submissive and that woman never asked to see your dick, no matter how fantastic you may think it is.

As far as contacting a Dominant, some of you will create a profile, put in some catchy things, be witty, and all that, but then what? Chances are you sit and wait for them to come to you. How’s that going? Look, again just my opinion, but most women, and yes, even Dominant Women, like confidence. They like men who know what they want and who aren’t afraid to take chances, because let me tell you, from what I have seen so far, the lifestyle is about taking chances.

Sending a Domme a quick note introducing yourself, and talking about a shared interest, will be a lot better than just posting a profile on a site and crossing your fingers, and DAMN sure better than sending them a picture of your johnson. Be confident when you approach a Domme, not arrogant, not cocky- confident. So these are just some tips for you to use if you really want to find the Mistress of your dreams.