I wouldn’t say my sex life crosses over into the realm of “Fifty Shades Of Grey,” and I don’t choke my sexual partners within an inch of their lives or pour hot wax all over their leather-bound bodies. But I’m pretty versed in spanking, vibrators, cock rings, and butt plugs. I like a little domination.

It’s no secret that in any relationship, there is one partner who usually calls the shots. As Amy Levine, sex coach and founder of Ignite Your Pleasure, tells Elite Daily, “It’s the elephant in the room that one [partner] initiates more than the other.” 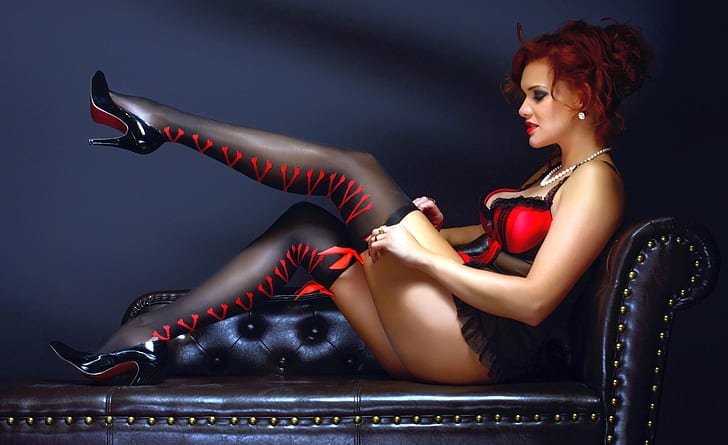 It’s unfortunate, but for most women, the initiator is usually that hot boo thang of hers. Not every lovely lady sees herself as an emboldened, sexual temptress, and there are lots of reasons for this.

One of the biggest reasons, according to Jansen, is that society tells women they have to be “nice.” So if you’re secretly a wild, dominating sex goddess, it’s easy to wonder how you can still maintain the “good girl” persona society tells you to have while also catering to your sexual needs.

Well, to put it simply and in the soft, delicate way that you know Auntie Gigi always does: This is f*cking stupid.

You can like sex and still be nice. Get your sh*t together, 2015. No more good girl/bad girl bullsh*t dichotomies. And if you want to get down to the nitty-gritty, bad girls have way more fun anyway.

The true key to getting down with your bad self is confidence. If you have confidence, you are unstoppable. Carlyle Jansen, sex educator and coach, tells Elite Daily that it “doesn’t matter what you like. Knowing what you want and getting it is a huge turn-on and very sexy.”

Getting your domination on can even help you get kinkier in the long run. Jansen says that “getting what you want can make you more interested in sex and more likely to initiate or want sex more often.”

So look no further, chickens. Here is your much-needed, step-by-step guide to taking control in the bedroom. Kink on, my friends.

Step 1: Figure out why you’re so shy.

To move into a position of sexual dominance, you must expel those pesky feelings of fear and shame that encumber such lusty takeovers.

Jansen says that getting to the root of self-confidence means understanding what makes you so shy. You have to hone in on your insecurities to overcome them.

Societal pressure suffocates a woman’s sexual freedom. We’re told never to take control. We’re told we’re the submissive ones. And if we move away from either of these damaging tropes, we’re doing something wrong.

The only way to move into the light and out of the dark ages is to realize that is completely ridiculous. Only when you’ve faced your sexuality and become comfortable with it will you be able to take on a more dominant role.

Levine says learning about your body is a good place to begin:

Know your body and how you like to be touched. Even if you’re shy, it’s important to know what feels good, so you don’t cheat yourself out of pleasure.

The next thing to figure out is what you like when you’re dominant.

Every gal as her own, very taboo cup of tea. What kind of sexy dominant temptress do you fancy yourself? A little teasing and naughty? Excessively brutal and punishing?

Pay attention to your physical and mental responses to these audio and visual stimulators. They are the building blocks for learning what turns you on.

Step 3: Communication is your best friend.

As with all the intricate, multifaceted, moving parts of relationships, communication is the glue that holds everything together. So talking about your interest in being sexually dominant is the best way to get what you want.

Try sending a sexy text. Tell your partner what you want to do to him or her. Drop a bunch of not-so-subtle hints. Be bold.

I know, I know — what if you’re worried that your boyfriend or girlfriend is literally not down at all to hand you the proverbial (or literal, hey!) reins?

Jansen suggests going hardcore. Start by suggesting whips and chains as a way to negotiate down. That way, you’ll eventually end up with something smaller and tamer, like a blindfold, which you can turn into a game of “Don’t move while I touch you.” Keeping things as approachable and non-threatening as possible is best.

“But Gigi, what if he completely shuts me down?” you ask. Well, if that is the case, my little sex kitten, I suggest taking Levine’s sage advice:

If you have a partner who is not interested in experimenting in any new ways and not open to new ideas, that might be something to think about how that will affect your sex life down the road (or now!)

When it comes to taking control, you may think the best way to handle your anxieties is to just throw caution to the wind. You may think the way to excite your man and release your inner Madam Raven is by sneaking upon him with a leather whip and a set of handcuffs.

No. This is not the way.

It is always best to negotiate ahead of time and be clear about boundaries so as to not violate your partner.

You might think to talk about this kinky sh*t ahead of time is a total buzzkill, but it’s not. This kind of negotiation is hot. “Negotiation itself can be super hot foreplay in and of itself,” says Jansen.

Figuring out your limits in the realm of kink is putting you in the mindset of getting down with that kink.

Step 5: Aggressive is good, but don’t take things too far, too fast.

You do run the risk of taking things to far. You know you were thinking about it. So how do you avoid making sh*t weird? What happens when you push the kink too far? What happens if one of you gets uncomfortable, put-off or even scared?

Jansen advises to not try too many new things at once:

It is better to leave your partner hungry for more and craving the next time than to push it too far.

She says that if you do cross the line, don’t just ignore it:

“If your partner says stop, then you need to talk [either] then or just cuddle and talk about it later about what happened.”

For beginners, there is no reason to run to the S&M sex shop and buy a leather harness, five crops, a ball gag, nipple clamps, and a spiked dog collar. You can totally get kinky by using items that you already have in your house.

If you’re into scratching, Jansen suggests letting your nails grow or using a fork from the kitchen to run down your partner’s chest and legs.

Or for bondage, you can grab a scarf or one of your boyfriend’s ties. There are plenty of simple knots you can learn to tie on YouTube. Levine says a necktie also makes a great blindfold.

Also, the kitchen is definitely not just for cooking. A spatula, wooden spoon or dish towel is the perfect starter kit for spanking.

And remember that not all dominance needs to be painful. Sometimes it can involve tickling. Use your winter accessories for more than just battling the cold: Grab your favorite pair of furry gloves to run all over your man’s body. I’m getting a little hot just thinking about it.

If you want real toys, Jansen suggests nipple clamps, a small flogger and a butt plug. Keep it simple.

And have fun. This is sex, after all. If it’s not dirty, you’re not doing it right.