Is Madonna a Dominant Mistress?

Is Madonna a Dominant Mistress?

Are these their real personalities coming out or just a sexy image, which makes people question them. Not to mention all the buzz that it create. Madonna, Kim Kardashian, Angelina Jolie, Rihanna, which one is actually a Dominant Mistress in life? 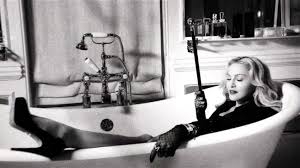 Madonna is considered the Queen of Pop. Provocative, overbearing, moving, sultry, Madonna is an elusive and exciting artist.

With a strong personality and incredible moves, she was able to impose its mark on the musical world.

For over 20 years, she sang on stages around the world. Each of her appearances makes the event, no matter how big or small.

To thrive artistically, Madonna understands that talent was not enough and she had to get a buzz to get noticed. She uses her music videos, concerts and interviews to express particular religion, sexuality and politics. Her outfits defiantly help show her fans who she really is.

Throughout her career, Madonna has stepped up her looks. Each album release, she creates a new look.

In 1984, the release of her first international hit, “Like a Virgin” she appeared in the music video wearing a wedding dress. This very personal wedding dress was a little provocative, and this became a reference in Madonna’s career.

After, there came the Marilyn Monroe look for “Material Girl”, the androgynous look for “Papa

Do not Preach “and then in the late 80s, came the bustier’s by Jean-Paul Gaultier.

Madonna began to appear with a sexy outfits, and very provocative and very domineering SM gear.

Early in 2000, she adopted the “country look” for “Cowboy Music” and in this reflects the different leotards for “Hung up”.

She adopted a very domineering look a very Sado Masochist trend which has been seen in at least two of her tours, “The Girly Show World Tour” and “Confessions Tour”.

The Tour Confessions  (2006) is the seventh world tour of American singer Madonna, promoting her tenth studio album, Confessions On A Dance Floor.

The concert is divided into four tables: Equestrian, Bedouin, Glam-Punk and Disco.

Equestrian focuses on the theme of sadomasochism.

Madonna: a mistress in her private life?

I discovered that the company that manages the rights of authors of Madonna is called “Boy Toy Inc”. At the end of most of her video clips, you can read Boy Toy Inc. encrusted.

This company was founded twenty years ago. Was it a little joke of Madonna Queen who in a few years will make the front page of every magazine with different handsome young man on her arms nicknamed The Toy Boys.

Indeed, after two divorces, Madonna seems to enjoy the company of young and beautiful men, but I mean who wouldn’t?

In an article (Oh My Mag.com) appeared shortly after her divorce from Guy Ritchie, her second husband, we read: “Madonna is a woman” domineering and castrating, “in the words of Guy Ritchie at the time of their divorce. “

Being Dominant in her romantic relationships, the star seems to want to control everything in her personal life, with her children and especially her partners.

In an exclusive interview of 2008 with the magazine Madame Figaro, the question will be posed directly to Madonna but it will not answer clearly.

Excerpt from the interview:

– Me neither. Sometimes that’s true, other times not. “Hard Candy”: the duality and contradiction again … (Madonna)

The relationship between a Mistress and her Kinky Boots

6 thoughts on “Is Madonna a Dominant Mistress?”