As soon as he saw me in the bedroom, he immediately began to undress. This is the good thing about training your submissive well, no time wasted on small talk. He was starting to get excited based on the erection that was starting to form between his legs.

He Completely Surrenders Himself To Me

Once completely naked, he kneeled on the floor with his palms on his back and his head down. I grabbed his collar and leash that was on the nightstand and approached him. While I crouched down and fastened it, I whispered, “Let’s see what you’re capable of.”

Seeing a man naked, with a hard-on excited and afraid of what will come next is an image not many people know how to enjoy. There is no greater pleasure than knowing this man has completely surrendered himself to you and you can do anything you want to him. 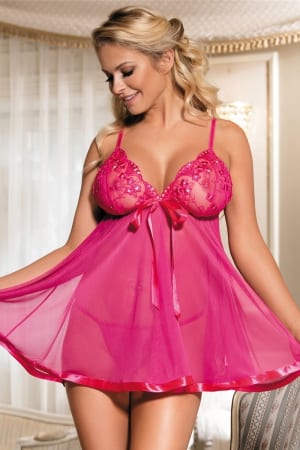 He was so excited to see me that he did not notice the table in the corner that was laid out with sex toys covered with a handkerchief. I moved the table in front of the bed while humming a song I heard that day on the radio. He was sweating anxiously waiting for what would happen next.

With a jerk of the hand, like a skilled waitress of the fifties, I pulled on the handkerchief and exclaimed: “Tada!!” But it was impossible for him to see anything because he was facing away from the table. I walked over to him and tied the handkerchief over his eyes to prevent him from seeing: “Curiosity killed the cat, my dear.”

I stopped for a second to observe him. He was even more attractive than he ever was at this moment. His white complexion contrasted with the black handkerchief. His nervousness contrasted with my complete control of the situation. First I grabbed my favorite toy: the Japanese clothespins. I untied my robe and got on my knees behind his ass. Sigh. I was feeling excited. You don’t need expensive instruments to generate intense pain.

It Should Be More Pain Than Pleasure

Let the games begin, I thought: I approached him pulling his collar, and said, “Stay like that, kneel for a second.” Left clamp.” AOWW!!! “Right clamp.” AOWW!!!. I placed my right hand on his head and pushed it gently, without force, so that he understood that I wanted him to be back on all fours.

I slid my index finger down his back and walked over to the table to get the next toy. The Waterberg wheel. I started rolling the wheel up and down his back which made him arch his back, bringing his ass against my pelvis. It seemed like he was receiving more pleasure from it than pain. That was a concern to me. Time to put more pressure.

The second round was slower and deeper. I drew an 8 on his back. In those turns, he realized the wheel causes very sharp but continuous pain. The type of pain that leaves a mark on your skin and your memory. “Third time’s the charm.” I signed my Domme name on his back with the wheel causing more pain but also beginning a higher level of excitement.

I let go of the Waterberg wheel and said, “Now let’s match the markings on your back to your ass.” In general, my favorite toys are the whip and the flogger. I really like the impact play. In addition, the flogger allows me greater maneuverability, without having to change position so I can distribute the pain evenly between the right and left sides of the body. It arouses him, even more, when he doesn’t know if I am using a whip or a flogger.

Willing To Do Anything

When I was done, I said, “It wasn’t so hard on you today, was it my submissive pet”. I went back to the table to grab cream. I walked to the bed and uncovered his eyes. There was pure devotion in his eyes.”You’ve been a very good boy. Now you get to rest for a little while before I give you a reward, yes?” “Yes, Mistress”. I untied his wrist and ankles and offered him a glass of water.

He was excited, docile, and willing to do anything I told him to do. It was a wonderful sight to contemplate while I massaged his ass with the cream that I had on the table. He moaned with pleasure while I gave him the massage. Soon, he noticed the smell of the cream I was using on him, “May I ask a question, Mistress?” I nodded sweetly as I continued to massage him. “Is that ginger I smell?” I finished massaging him, exchanged the cream for the piece of ginger that was partially peeled, and approached him where his head is at. “You have good senses, like a bloodhound,” I said winking.

I Don’t Have To Mention What Toy Comes Next

When you introduce a couple of centimeters of ginger into a person’s body, the reaction is not immediate, but rapid. Immediately he noticed it and wanted to shudder but it was forbidden. That was our game. While he wanted to be able to do more than a whimper, I would shake my hand in a way that emitted almost a vibration, causing the ginger to vibrate inside of his anus, touching him everywhere inside. The heat and itching were unbearable. “Mistress, please,” he managed to beg. “Sshhh!” He looked at me as I accompanied my response with my left index finger over my mouth.

Letting My Saliva Fall On It

The First Interview With Mistress Savannah