Mistress always took her sissy cunt for a walk down Main Street. Fortunately, the cops did not frequent Main Street anymore because it was such an old part of town, and not too many people went there. It was only the drakes, bums, and prostitutes. Mistress also had to remind sissy cunt why she had to go every night. She owed her a lot of money for the time Mistress would spend training her to be a sissy slut. They were walking to the main street knowing it was about to rain. Sissy cunt loved the rain. Mistress had a set up on Main street for this special occasion. There was a solid fence that stood about eight feet high. It was on the corner of Main street and an alley with no name.

Mistress and sissy cunt arrived with about three cocks sticking out of the holes. “On your knees my sissy cock sucking slut,” demanded Mistress. “Yes Mistress,” sissy cunt replied. Mistress pointed at the smallest cock first and sissy started to giggle. Mistress slapped her and explained this is not proper behavior if she wants to earn money to pay her back. So she began to suck this cock in the rain. The fence had a cover to prevent the rain from getting them all wet. 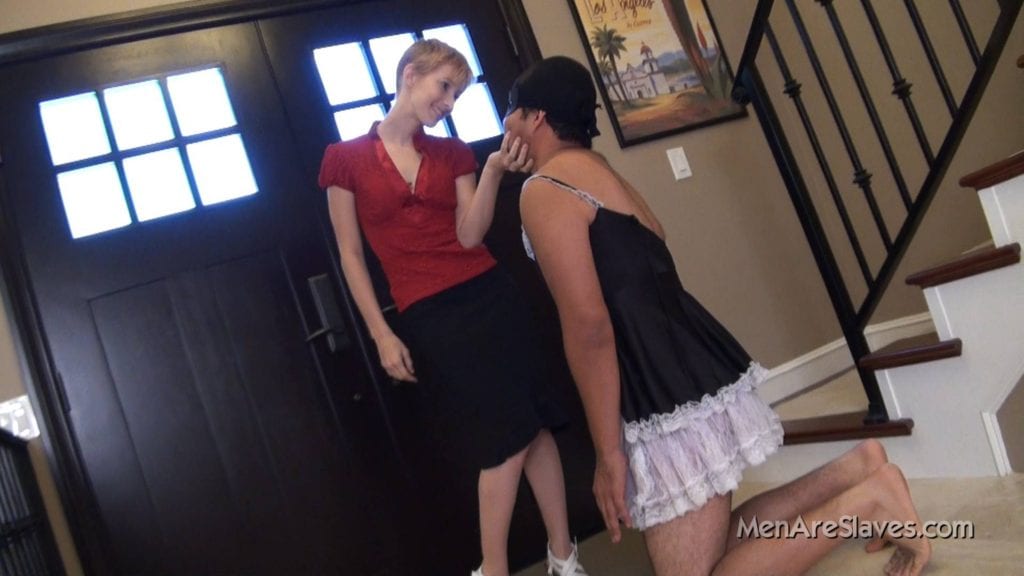 Finally, they finished. Mistress started counting her money. Sissy looked up at her wondering about her share. Mistress slapped her and reminded her, her share was in her mouth. After all, it was only 15 dollars for three of them. Sissy cunt turned and looked, there were three more cocks poking through the fence. She looked up and the sun started peaking its bright lights through the clouds. Sissy noticed how each cock had a sunbeam on it as if it were going to stroke them for her. The first cock began to rise on its own. Mistress noticed it as well. “The Ghost of Cocks to Cum,” she said with a slight giggle.

“Mistress, can I wait till the next rainfall?” asked sissy cunt. She loved blow jobs in the rain because she had to work and could feel the cocks getting harder in her mouth and this excited her. Mistress explained they already paid. One paid a lot more so she will have to give that cock more attention. Sissy went over to the first cock. It was a good 7 inches.

She noticed all the hair that seemed to crawl all the way up to the head. She could see different colors in the hair as well. The most prominent was a grey color. She looked at Mistress with a somewhat distressful look. “Do I have to do this one?” sissy cunt mouthed silently to Mistress. “This thing stinks too. It smells like it came out of the garbage can.” “Don’t worry,” Mistress replied, “it won’t take long. This one has not been touched by anyone in a long time.”

Dripping Drip The Precum Dribbles Down

Sissy cunt got back on her knees and started licking, touching the head with her tongue. She could feel it twitching and twerking each time. Then, she wrapped her lips around the head and swirled her tongue around and the precum became a dripping drip that would not stop. She stopped for a moment and used the precum as a lube and began to stroke the dick with her painted nails and her hands. Just as she began to put her mouth over the hooded pole, she had a blast of white gooey splooge all over her face. “See,” Mistress said, “didn’t take long. Next.” “Yes Mistress,” sissy replied.

The next pole was hanging there as If it was a dead vine hanging from a tree. Mistress explained she will have to get him hard. She began to suck and swirl her tongue and then use her nails to caress the balls. The cock was getting rock hard. She stood up and turn around, bent over and grabbed the cock, and put it in her boi pussy. She started feeling a thrust and began to moan repeating “what a slut and whore she is for Mistress.”

When she looked up at Mistress and thanked her for the honor of serving her. Just before the man came, she turned back around and got on her knees, jacked him off till he came all over her chest. The first two men left. Mistress explained to sissy that she will need to go around to the other side for the next one. She crawled around to the other side.

He looked like he just came from a costume party. The man had to make up on, black clothes, and a mask. He said in a low voice, “I’m Batman.” “There is my little slut.” Sissy could only reply with a somewhat serious and sarcastic reply, “Fuck me, Batman.” The man smiled and had her turn around. She had to pull down her panties with the dried-up cum from the other guy that was previously inside of her. She began to feel a swat from the wings of his costume on her behind. After a bit, the man tried to get his costume off. He had to have sissy help him. Once the costume was off, his belly-flopped out as if it was a whole other person.

She had a disgusted look on her face but was cognizant enough to hide it. It was hidden by Batman’s wings. She knelt down slowly in front of the man while looking him in the eyes. She grabbed his penis and started tickling it with her long nails. He started to get hard and then she went tonsils deep with his cock. The whole thing fits easily in her mouth. Part of her instruction was to keep eye contact with him as much as possible. So she did. Before completion, the man looked at Mistress. “Do you want to help her?” he asked Mistress. She then took her cane that she usually uses to punish sissy, and smacked the man over the head with it. She took sissy by the hand and they went home.

Strapped In The Fuck Bench