My girlfriend is twenty-three and I’m twenty-one, she has always said how she always dated younger men since we first met, she likes to be in control she said. We have only been together for a couple of months, and it was only a couple of weeks ago we had sex for the first time, she seems like a decent enough woman in that respect, at least she isn’t willing to put it out on a plate for anyone I thought. 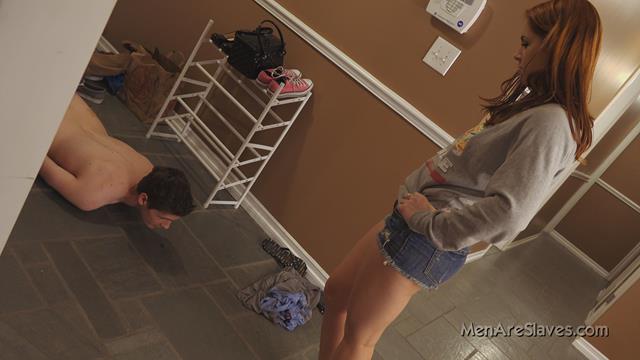 We were around her house one night and her parents were out, we were downstairs watching a movie, her parents weren’t due back for a few more hours so we got pretty cuddly on the sofa and felt relaxed knowing we had the house to ourselves. We were talking about what we wanted to achieve in life and we spoke about our relationship and what we both wanted in the future, and it turns out we both want the same things which are great. So all in all at this moment things were going great for the short time we were in a relationship, I was happy and so was she, but that night things turned on its head pretty quickly.

We were having a joke and a laugh, she went to the kitchen and got us a glass of wine each, at that point when she was walking back in she saw that I was on my phone just texting a few friends, she didn’t like that one bit and thought I was being rude. She started arguing with me for no reason, telling me how rude I was being whilst in her company and I was just trying to explain that I was texting a couple of friends because they asked me what I was doing that weekend.

She still couldn’t understand it and started shouting the odds for no reason whatsoever, I wasn’t being disloyal or anything like that, just merely texting a couple of friends when out of nowhere she hit me around my face really hard “You are a dirty lying cheat” she yelled.

My face was stinging she slapped me that hard, “You fucking crazy bitch!” I shouted back at her. We were arguing for all of ten minutes and then as quickly as it started she quickly apologized and said she lost it, she just assumed I was being disloyal – at that point, I thought she wasn’t all there, but we quickly forgot about it and continued on with what was originally a nice night.

Her parents got home an hour or so later. “What happened to your face dear?” her mom asked me nicely. “Oh, I have an allergic reaction to wine sometimes, I just get a red cheek and then it goes shortly after” I replied. “Well that’s weird,” she said whilst raising her eyebrows at me, my girlfriend smiled and chuckled to herself shortly afterward. From that night on things got out of control slightly, we were arguing a lot, she didn’t like it that I stood up to her that night and called her a crazy bitch – but then she shouldn’t have been one.

We went out on the weekend for some food and drinks afterward with a few friends, we got back to my house that night, I live alone so we had our own space, she went into the bedroom before me and got dressed into a nice leather corset, I instantly got an erection she looked that hot.

She strolled into the living room doing a sexy walk and then stood there and looked at me, I got up and went to put my arms around her, she slapped me around the face her hardest again “I’m the one who’s in control you fuck!” she shouted at me, she chucked me some handcuffs “Now put these on you little bitch” she said to me. I obliged because I still thought we were going to have sex, but I ended up getting abused instead.

She walked over to me and sat on my lap, lightly slapping me across both cheeks “You’ve been a very bad boy and now you will pay for standing up to me” she whispered in my ear. I was pretty excited, but then she immediately followed on from that by ripping off my shirt – it was one of my favorites as well I wasn’t happy at all. She started biting into my skin, pinching me, she slapped me numerous times and I had red marks all over the place. Then she pulled down my pants and this is when I thought I was going to get my end away but she started grabbing hold of my penis really hard and pinched my balls, it started stinging and was very painful – but it didn’t faze me as I was quite enjoying myself.

She turned me over and started spanking my ass “You will always do what say!” she shouted, she wasn’t letting off either and she continued to spank as hard as she could, I wasn’t able to sit down for a few days after it was that hard. She continued and continued the abuse until I was hurting all over then she started to slap my back really hard, and this is when I was in real pain “Fucking get off me you bitch, I won’t answer back I understand you are the one who’s in control” I repeatedly shouted.

I could see where this was going, I wasn’t going to get any sex out of this at all, all she is going to do now is let me go and prove to me that I’m not going to get what I want, and that is precisely what she did, she let me out of my handcuffs and then got dressed and got a taxi home, she didn’t even say bye to me she just left.