I’ll tell you the most intense humiliation story and it was the most exciting time of my life. I had enrolled in a self defense class for a few weeks with a new instructor. This course was supposed to teach students how to defend themselves if attacked on the street. It was designed for both men and women.

One night in the middle of a workout, one of the instructors gave some advice to women on how to respond if attacked in the street by a stranger. Whereas the exercise did not concern me, I’d rather laugh with my male colleagues.

-You Kidding who foolishly, you will hold perfectly the role of stupid and perverse brute who assaulted the girls! 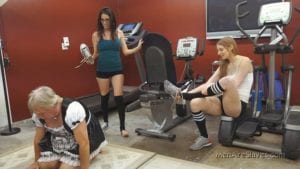 I blushed, and everyone laughed, seeing me as a little boy reprimanded. She asked me to simulate an attack from the back. So I obeyed without much enthusiasm, one arm in the air and smiling with the simpleton air of one who has lost the face once. I did not expect that her reaction would be so strong. She grabbed my arm and turned it so that I was kneeling before her. She continued this movement. I was absolutely unable to react. I found myself face against the ground on the battle mat, nose almost against her bare feet. This provoked in me a strong uncontrollable excitement and my dick started to harden. Luckily I was on my belly I said to myself.

Looks like she read my mind because she made me turn on my back. I had the bad idea to put on fairly short shorts that day. Some other members had to note the lump that was growing more and more because I could hear muffled whispers and laughter. The teacher continued her torture by placing my head between her legs and inflicting a strangulation “triangle” move. It was very painful. My head was found in direct contact with her pussy I could smell the moisture through the fabric of her lycra leggings. I tried to extricate myself from the embrace crawling but it only added to trace my shorts and it was at that moment that my cock escaped from the pocket of my boxers and began to appear for all to see . My purple and shiny acorn excitement seemed to seek air and was looking for a cave to hide in. More I struggled, the more my penis came out and ridiculously swayed in the air. An embarrassing laughter rang out, I heard comments both mocking and outraged.

The teacher loosened his grip, happy with her demonstration. She looked at me with amusement while I left the mat and ran toward the locker room trying to find some where private. I will never set foot in there again, but due to a mishap I arrived a few days later.

I came home from work quite late. It was almost dark and I entered my key in the lock when someone grabbed me from behind and hugged my throat with his forearm.

-If You scream, I will strangle you! Enter !

I immediately recognized the voice of the instructor and the memory of the humiliation of last time made me bend violently. I also knew that I should not fight back because she was able to lock me in a split second. She led me into the living room and put me an arm bar to kneel.

– I had not finished with you the other day, your cock betrayed you, you know as well as I do that you’re under my grip, physical and psychological, and it excites me greatly. I will let your arm go now, and you’re gonna fuck me naked, and you’ll lick me until I enjoy. I know you do not contest anything because it excites you as much as me being my minion, my slave!

She was right. I felt that I could enjoy just by listening or watching. She lowered her leggings and my head on to her. She was soaking and my tongue reveled in her juice’s. She spread the cloth and rubbed her pussy on my mouth for a few minutes before enjoying standing over me, her legs trembling.

Submitted to the domineering instructor!

-Although, it was just an introduction, from now on, you’re gonna be my guinea pig for my self defense sessions! Finally, these are special sessions for women that I do on the weekends. I expect you to be mistreated, humiliated, raped and forced. You will not be enjoying anything during these sessions!

I’ll allow you to enjoy twice weekly. You will only be allowed to enjoy while we are in the shower. The rest of the time you’ll be home for my personal service and you’ll wear a chastity belt. It that clear ?

-Yes Madam ! – My ultra tight tail could answer for me!