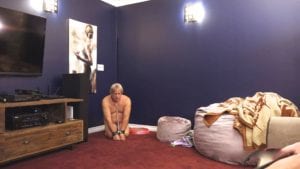 Escorting the senator’s wife to social functions around Washington, D.C. became a fairly routine assignment, two or three times a month. The couple lived in a seven-million-dollar brownstone in Georgetown. It was not uncommon that the senator was kneeling by the doorway in a sissy maid outfit when I arrived to pick up his wife.

When the function (generally a concert or charity gala) was over and we were on our way home, she’d text the senator, instructing him to lock himself in his cage in the master bedroom. She’d lead me upstairs to her bedroom and we’d go at it while the senator watched, getting a hard-on while his wife fucked her favorite bull.

Sometimes Dabney repeated the cum-licking ritual we played out that first time in Mistress Hunter’s blue room, but other times she left the senator caged and frustrated after we had fucked to her satisfaction. Post-sex, we’d watch cable news channels (CNN, MSN, etc.—I think that was for the senator’s sake), eating cold grapes and sipping champagne. A few times we fell asleep with the senator still caged. She had trained him well; I never heard a word of complaint or peep out of him—this from a man renowned for bombastic speeches on the senate floor.

My Night Out With The Senator’s Wife

Truthfully, I preferred it when the senator was away on a junket or one of his hunting trips to Montana. When I performed as a bull, it was over-the-top, raunchy sex. When he was gone and we were alone, our love-making was much more sensual. Dabney was an exceptional lover, with a lithe, supple body and a seemingly insatiable appetite—amazing for a woman in her fifties. She orgasmed easily, an ego boost for me. Even so, I couldn’t help but think of Lillian.

The arrangement went to hell one hot evening in July. Dabney and I were walking on a side street near the Lincoln Center when a thug in a hoodie and sunglasses came up from behind and asked for money. At first I thought he was a panhandler. I fished out a five-dollar bill from my wallet, handing it to him, but then he pulled out a gun, waving it at us and taking the wallet. When he looked down to shove my wallet into his baggy pants, super-hero me decided to take advantage of the opening and tackle the guy. We went to the ground and wrestled for the gun. It went off right next to my ear, stunning me. A moment later everything went black.

The Act Of Heroism Leads To A Hospital Stay

The thug ran off with my wallet, ignoring Dabney. She called 911, then Mistress Hunter, who dispatched Lillian to the scene. After giving her report to the police, Dabney left to avoid any potentially embarrassing questions from reporters at the hospital (there were none; turns out muggings are old news in Washington, D.C.). When I regained consciousness, the ER nurse informed me that I had suffered a moderate concussion and the doctor had put seven stitches in my scalp. An MRI showed no evident damage to my brain. I was held overnight for observation; Lillian stayed with me in the private room arranged by Ms. Hunter.

Finally, alone in a private room with Lillian. Unfortunately, the last thing on my drug-addled mind was sex. In the morning, other than a splitting headache, a very tender skull and slightly blurry vision, I was fine. They discharged me at noon. Back at Mistress Hunter’s house, instead of being put in her cage or my cot in the basement room, I was bedded upstairs in one of the spare bedrooms. Miss Lilly checked on me frequently, bringing me water, soup, crackers, once even calling me “her hero” (to my enormous pleasure). Mistress Hunter visited after work, sitting on the edge of the bed and clucking at me. She lifted a lock of hair from my eyes with a disapproving pucker on her lips.

I couldn’t tell if she was angry or pleased. Finally, she admonished me, “Mr. Green, your bravery last night is commendable, but if you are going to behave like James Bond, then you should have his skill set. Have you had any training in personal defense?”

Not exactly. In grade school, I was assaulted by the class bully and got a in a lucky elbow to the eye that ended the fight. Thereafter, I foolishly considered myself capable of self-defense. In high school, I was exposed briefly to wrestling in gym class. I hated it. Truth was, I didn’t have a clue how to defend myself or handle a mugging.I had been lucky to skate through life unmolested until now. “No, Mistress,” I admitted.

“Well then, when you have recovered, you shall receive training in the art of self-defense, starting with the knowledge that even with a black belt in karate, you are no match for a gun. You are lucky to be alive, Mr. Green.”

Mistress Hunter struck me lightly on a cheek as she said this, but it was more of a love-tap than a real slap. In her eyes, I sensed what might be a certain fondness, possibly even gratitude. My gallantry may have been foolhardy, but it had not gone unnoticed. 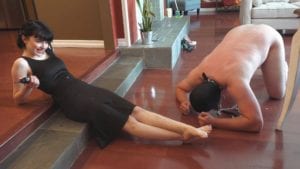 A Self-Defense Lesson By Mistress Hunter

A few weeks later, my vision back to normal, the stitches in my scalp removed and health restored, my training began with a session with Mistress Hunter herself. We faced off in an open space at one end of the dungeon. She wore black tights and a cotton top. I wore my slave harness, essentially naked, my cock encased in a leather pouch.

In one hand, she held a leather purse. “Mr. Green, we’re going to play a game. I want you to attempt to snatch my purse and tap it against the wall. If you succeed, you earn a bye to excuse your next infraction. If you fail . . . you’ll receive ten blows with a cane.”

The next moment, I found myself on my back, the breath knocked out of me, my legs splayed in the direction of the wall, my left arm in Mistress Hunter’s grasp, my wrist turned painfully back, immobilizing me. “That’s one for me, Mr. Green. Try again.”

I rose from the floor, my rear end and shoulder blades stinging from the impact with the floor. This time I tried to dash past her right side and snatch the purse going by. Somehow, she got a leg out and tripped me. Down I went and before I knew it she was on me, twisting an arm painfully behind my back. “That’s two for me, Mr. Green. Twenty blows with the cane. Try again.”

She stood up, extending an arm to me. I took her hand and she helped me up to my feet. She took a step back and once again turned around. I eyed her warily, admiring her sculpted physique, those gorgeous legs, rounded, muscular ass, narrow waist and athletic shoulders. Clearly, she held a black belt in something and I was out of my league. How to attack?

My pride was wounded. Bitch—if she wanted to play kung-fu, I’d simply take her down, like I had learned long ago in wrestling class, pin her to the floor and take the damn purse. I dove for the back of her knees. Her knees buckled and down she went, but she somehow twisted to one side like a cat and I ended up with her forearm locked in a choke-hold against my throat.

“That’s three for me, Mr. Green. Double or nothing or do you surrender?” I gagged a few times, attempting unsuccessfully to reply. She slackened her choke-hold and the words gurgled out of my throat, “I give, Mistress.” She nodded with satisfaction and rose to her feet. “A wise decision, pet. Now get up, face the wall and bend over and grasp your ankles with your hands.”

I did as she instructed and waited with dread as she selected a cane from the wall. “We’ll dispense with the ‘thank you’s,’ Mr. Green. You may simply count.” I counted out the stinging blows of her cane between gritted teeth, feeling humiliated, my pride shredded, ass and thighs on fire and temper rising. How was this punishment supposed to teach me self-defense? 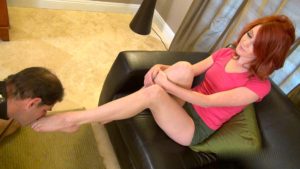 Some Foot Worship For Mistress Hunter

When Mistress Hunter finished, she ordered me to my knees, prostrated in the position of submission. “Kiss my feet, Mr. Green.” Her feet were bare; I kissed them across her painted toes like they were piano keys. The act calmed me, draining away some of my anger.

She knelt next to me, caressing my inflamed backside, and murmured, “Mr. Green, as you can see, you are no match for someone who knows how to defend themselves.”“Yes Mistress,” I acknowledged grudgingly.

“Now don’t pout, Mr. Green. I want you to remember this lesson. Channel your anger into learning. I am going to send you to my Sensei, Mr. Moto. He teaches real-world self-defense, a form of mixed martial arts, blending Ju-Jitsu, Judo and Karate.” “Thank you, Mistress.” “You will thank me and mean it sincerely, someday when your true love is threatened and you are able to protect her.” I thought of Lillian. “Yes, Mistress.” She read my mind. “You’ve fallen in love with Miss Lilly, haven’t you, Mr. Green?” She responded to my hesitation with a sudden slap on my rear. I flinched. “Yes, Mistress.”

To The Dismay of Mr.Green, Miss Lilly Is Going To Be Sent Away

“Well that’s too bad, my pet, because you belong to me, don’t you?” “Yes, Mistress.” “Miss Lilly won’t be here much longer to tempt you in any case; I’m sending her away.” This news landed like a thirty-pound rock dropped on my head.

Mistress Hunter reached between my legs and extracted my balls from their leather pouch, squeezing them together harshly, instantly taking my mind off any pitiful thoughts of life as a slave without the endearing presence of Lillian.

“There, there, my pet, you’ll be fine without Miss Lilly hovering over you. Just think of all the new responsibilities you’ll inherit, and how much more time you’ll spend serving me.” Those were the last thoughts on my mind. I knew I was totally out of line, but my misery knew no bounds and I didn’t care. “May I ask where you are sending Miss Lilly, Mistress?”

Her already vice-like grip tightened in response; clearly my question angered her. I writhed in pain, my knees growing weak. It took all the strength I possessed to not collapse on the floor.

After about thirty seconds she relented and put her lips to my ear. She whispered her reply to me, words that tumbled into my head like fiery stones, free falling through my brain and into my heart. The searing pain radiating outward through my body. “I’m sending Miss Lilly to my farm in Maryland, Mr. Green, where she will be bred.”

Next: Farewell to Lillian