My erotic spanking fetish started when I was a little boy. I had this babysitter who was the most beautiful girl I have ever seen. She would babysit me often and she was only three years older than me. I always enjoyed having her babysit me because I genuinely liked her. One night the whole dynamic changed. She was babysitting me and I told her I was hungry so she decided to make me some nachos. She told me to watch the microwave and make sure it didn’t get too hot and blow up the cheese. Of course I did everything I could to make sure it didn’t happen. 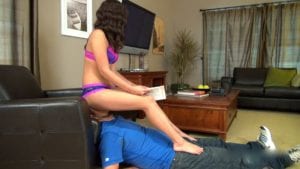 She ordered me to get on my hands and knees and stay there for the rest of the night and if I wanted to go somewhere I had to crawl. Eventually, she told me she had to use the bathroom and ordered me to lay down. Confused, I obeyed. She decided to pee and poop in my mouth and swallow every last drop. There was some slippage and she told me that I was not allowed to go to bed until her floor was spotless. I cleaned it all up on my hands and knees and after, went to bed confused, but turned on.