Lillian stood on her toes for at least an hour, if not more. I had no idea how she did it. We were both gagged; all we could do was look into each other’s eyes in shared agony, knowing that if she faltered in the slightest, the device would cut off my balls. Perhaps God sent her superhuman strength in response to my promise that if She would only let me keep my balls, I’d love Lillian forever.

I couldn’t fathom where Lillian found the strength, but somehow, she did. It was a miracle. Mr. Thompson even said so when he finally returned and took in the sight of my balls still attached to my body: “Jesus Christ, girl, you still on your toes? That’s a fucking miracle.” He scratched his head and looked down at my cock, grabbing the aluminum brick just to make sure my balls were still intact. “Holy mother of God, this girl must surely love your balls.”

Forgot To Cock The Castration Device

Shaking his head and muttering, he unsnapped the cable from Lillian’s collar. She dropped instantly to the flats of her feet with a groan of relief her gag couldn’t contain. Her eyes were now several inches lower than mine, and in them, for the first time, I saw the suffering she had endured. The wire still ran up and over the beam and down to the castration device . . . my balls remained in mortal peril. I couldn’t help but look down as Mr. Thompson took hold of the aluminum brick encasing my cock and balls. I thought he was going to open it at the hinge, but to my horror, he jerked the cable.

Nothing happened. He leered at me with a sly grin. “Guess I forgot to cock it,” he said. My eyes bulged out. I have never wanted to kill a man until that moment, but I would’ve killed him without mercy, the sick, sadistic bastard, I would’ve strangled him with my bare hands. Unfortunately, my hands were still firmly cuffed above my head; I was helpless to do anything but fume with impotent fury as he snapped the steel rod to Lillian’s collar and herded her out of the shed. 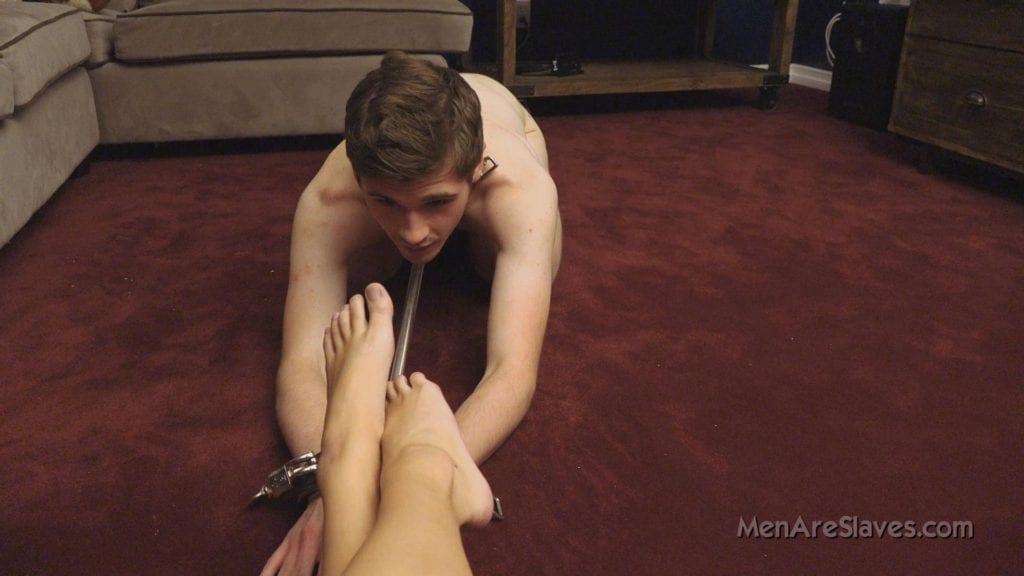 Be A Man Instead Of A Sissy Girl

Another hour passed. Or maybe two. I lost track of time. I watched ragged lines of sunlight slowly march across the dirt floor. From the angle cast by the sun through the gaps in the slat siding, I guessed it was mid-afternoon. My arms and shoulders screamed in agony, but now I had an antidote for the pain—all I had to do was look down and see my balls.

Lillian’s balls. She had earned them. Finally, Mr. Thompson came back. I looked for a chloroform cloth in his hand, thinking that was the only way the bastard was going to subdue me if I had the slightest opportunity to wrestle free, but his gloved hands were empty, save for a wire key ring.

“Well, if this isn’t a howdy-do, Miss Paulina, you hangin’ around in the shed while your girl is out in the north forty on her back, wondering if she’s gonna drown. Maybe you’d like me to let you down so’s you can save her, be a man instead of a sissy girl. You like that idea, sweetheart?” I looked at him with alarm. What was he talking about, Lillian drowning?

“Here, I’m gonna let you speak, darling,” he said, reaching behind my neck to unbuckle the gag. Finally, the damn thing was out of my mouth. My jaw ached. I felt like retching, but instead, spit out some drool and blurted, “What do you mean about Lillian? What have you done to her?”

Mr. Thompson stepped back, hands on his hips, an impassive expression on his face. “Make you a deal, boy. I’ll bring you down and put these keys here within reach if you promise to be still until you hear my pickup drive away. Got it parked within earshot. I’ll even tell you where you can find your girl, but you better hurry, she’s in a bit of a predicament. May not last too long.”

I didn’t understand what he was talking about, but clearly, Lillian was in peril. I nodded in agreement. “Just tell me where to find her, I don’t give a shit what you do,” I snarled. He pursed his lips. “Yeah, well, you say that now but who knows what a she-male like you will do without Mistress around to make him behave. You always behave for Mistress Hunter, don’t you, girl?” He reared back and slapped me hard across the cheek. “Ain’t that right, sissy?”

Don’t Move Until You Hear The Engine

My cheek stung like hell, but I swallowed my anger. I had to get to Lillian, this asshole didn’t matter. Mr. Moto had taught me the ultimate exercise of jiu-jitsu is in its non-physical, verbal expression. “Yes, you’re right, Mr. Thompson,” I said in a contrite voice, my head bowed. “That’s better.” He stepped back to where the rope was wound around a brass clevis and freed it, lowering my wrists to waist level. “Now get on your knees, sissy.”

I dropped to my knees. Every fiber of my being screamed to attack, to throw myself at this monster and bring him down. Instead, I kept my gaze lowered, so he couldn’t see the fury on my face and have second thoughts. He tossed the key ring in front of me. “Don’t make a move till you hear my engine turn over, got it?” “Yes, sir.”

“That’s a good girl. Now once you hear me drive off, you can free yourself. Head up the road past the lodge and cabins. Keep going until you see a pond on the left. Go over the dam and circle to the back, you’ll find a path. About half a mile up, you’ll find a clearing in the woods. That’s where your girl’s waiting for you, flat on her back. But better hurry . . . I opened the fill valve and the water’s rising.”

Rushing To Save Her

My brain jangled like a fire alarm. I wanted to jump up and grab him by the throat, strangle him and then go rescue Lillian. Oh my God, Lillian. I took a deep breath and replied, “Yes, sir, got it.” Out of nowhere, Mr. Thompson swung his hand against the side of my head with a crashing blow that sent me to the ground, my head spinning. I didn’t even hear him leave the shed. As the ringing in my ears subsided, I heard an engine roar to life, wheels spinning, and tires crunching on gravel.

I shook my head, forced my eyes to focus on the key ring, reached out, and took them with my fingers. There were dozens of keys, so I just start trying, awkwardly fumbling through them with my wrists still cuffed before I found the right key and it unsnapped the padlock. The locks on the ankle cuffs took a simple skeleton key but still, it took another minute before I was free. I didn’t bother removing the leather windings around my cock and balls. I dashed out of the shed, butt-naked, and began running up the road to find Lillian.