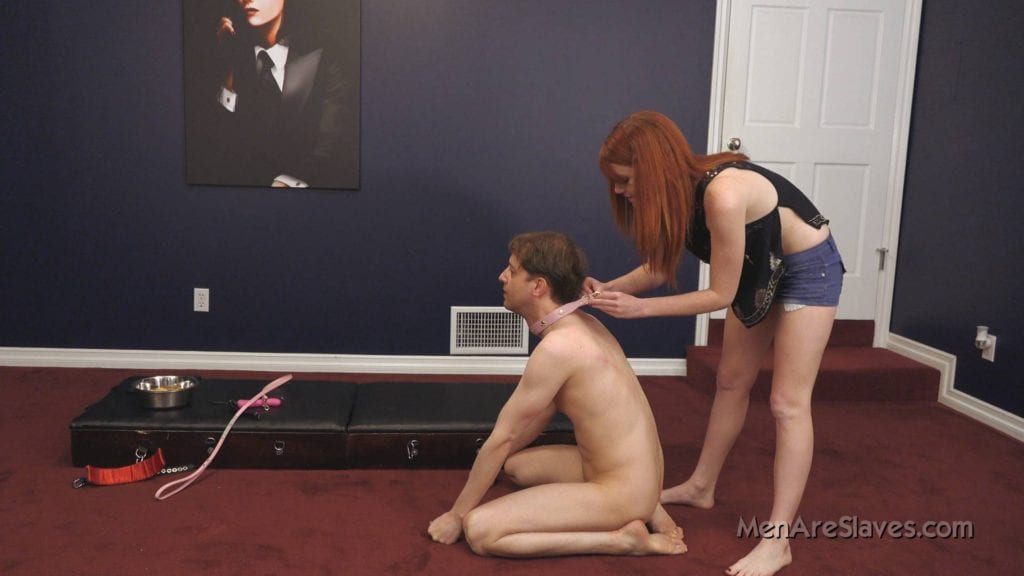 That weekend we went to the farm, which turned out to be the “Circle S Ranch,” a 1000-acre horse farm in rural western Maryland, its brand unsurprisingly the letter “S” inside a circle. It was a long drive from Alexandria, especially when you are standing in the back of a delivery truck, your wrists shackled over your head along with seven other naked men, jostling about like slabs of meat.

We were male studs, sub-studs; presumably, hand-picked by Mistress Hunter to breed Miss Lilly. Unbeknownst to our owner, one of us had gotten a head start on the endeavor. However, unlike some of the others in the truck, I had no idea what to expect when we got to the farm.

One of the subs, a black Hercules named Gill, knew exactly what to expect, this being his third time. “They’ll herd us into cages, feed us slop, then lights out. In the morning, they’ll run us through our paces before the fuck-fest begins,” he said. “That’s just the start. It’s a long weekend, fellas.”

My Mind Is Preoccupied With Thoughts Of Lillian

The sub next to me, Erik, a lanky, bearded redhead fellow, asked the question the rest of us were wondering: “What does that mean, ‘run us through our paces’?” “It means we get hooked up to one of those horse exercise machines, four at a time, and we run around the pen in circles until the first man drops. Then again, until the next one drops, and so on until there’s only one man standing. The last man standing gets his pick, and gets to go first.”

Since there were eight of us, that implied two heats and two winners, but no one asked Gill how Mistress Hunter decided which man went first. Maybe they flipped a coin. Or wrestled for the honor. Whatever. My mind was preoccupied with thoughts of Lillian being fucked by seven strange men. We got to the farm at sunset, the sun in our eyes as we were herded from the truck into the barn, each man’s wrists shackled to the rear collar ring of the man in front of him, Gill leading the way.

I spied Mistresses Hunter and Melony standing to the side in cowgirl attire: embroidered blouses, blue jeans, and riding boots. For the first time, I met Mr. Thompson, the ranch manager who Mistress Hunter had tamed so long ago. He wore farmer’s overalls, and a straw hat, and wielded a horsewhip. He made sure we felt his lash as we made our way into the barn. Add ‘sadistic’ to dim-witted and loyal.

Inside the barn, it was shadowy and smelled like cows, horses, and hay. We moved past a row of stalls occupied by horses to an open part of the barn, where steel-barred cages lined a wall. A solitary cage occupied the center of the open space, and inside it crouched a naked female form—Lillian.

We Can’t Wait To Fuck Her

As Gill predicted, after a bit, Mr. Thompson came by with rubber feed bowls filled with mystery slop. I was starved, same as the others, and we devoured whatever it was. It wasn’t that bad, to be honest. After eating, I had the urge to urinate and wondered if we would have to piss in our cages and then sleep in them like animals when I noticed a concrete trough in the dirt running parallel to the wall under the rear of the cages, which were just tall enough for us to crouch on our knees to take a piss.

Lillian Gets Led Out Of The Barn

The last event of the evening was unexpected but I was glad for it: Mistress Melony came into the barn following the beam of a flashlight. She flipped a switch and a bulb hanging from an overhead beam lit up, casting a circle of illumination, like a weak spotlight, on Lillian’s cage. She unlocked the cage door, cuffed Lillian’s arms behind her back, snapped a leash to her collar, and led her out of the barn.

Of course, all the subs—me included—watched this silent drama with intense interest. If it were possible, filthy as she was, her dark hair a tangled mess, Lillian was somehow more beautiful than ever. The nobility of a slave, perhaps . . . or . . . maybe it was just my imagination, but it seemed to me, she glowed from within. Was it possible she was pregnant?

I held onto that possibility as I listened to another round of lewd comments. Eventually, everyone drifted off to sleep, everyone but me, that is. Wide awake and unable to sleep, I leaned against the bars of my cage and listened to my companion’s snoring, thinking about tomorrow and wishing that I had kept up with my running since becoming Mistress Hunter’s slave.

I must’ve eventually fallen asleep, because the next thing I knew, someone was rattling a bar across the tops of our cages. Mr. Thompson. “Rise and shine, boys!” he bellowed. One by one, we stirred in our cages, rising from the straw bedding to our knees.

Mr. Thompson stood front and center, leather-gloved hands on his hips, shafts of sunlight cutting across the dirt floor at his boots. “Now boys,” he continued, “I want you on your knees, facing front, hands on the bars. Put your hard-ons where I can see ‘em. Now move, or there’ll be hell to pay!”

It hadn’t occurred to me that some of us might have morning hard-ons, but Mr. Thompson was right; to my acute embarrassment, I was one of them. It also hadn’t occurred to me that our jail-keep might be gay, but it seemed that way as he walked down the line of cages, grasping at the hard dicks sticking through the bars, grabbing each one as he owned it.
When he got to my cage, he took my rigid dick in his gloved hand and squeezed it. “Woo-ee!” he said, “we got a live snake here, do we not! What’s your name, boy?”

I held onto the bars and fought the urge to reach out and sweep his arms away. But I knew better than to inflame him. I kept my eyes fixed on the dirt. “Paul, Sir,” I muttered through my teeth. “What? Do you think I want to be your friend, boy? I asked, what’s your name?” “Green, Sir. My name is Green.” “Ah, Mr. Green, I know that name. Your Mistress Hunter’s house boy, isn’t you?” Hoping it wouldn’t set me apart in the minds of the other subs, I replied, “Yes, Sir.”

Mr. Thompson Is Smarter Than He Looks

“So then, I suppose you know our pretty little filly, Miss Lilly, don’t you, Mr. Green?” “Yes sir, I do,” I cautiously admitted, trying to sound like I could care less. “And I bet you’d love to be the first to fuck her, wouldn’t you, Mr. Green?” “Oh, Yes Sir!” I agreed enthusiastically, trying to sound like one of the guys. God forbid I betrayed my feelings for Lillian. Unless Mr. Thompson already knew; had Mistress Hunter informed him? A cold shudder ran through my body. That was entirely possible, in which case this exchange was a charade and Mr. Thompson was not the dimwit Mistress Hunter claimed.

Mr. Thompson released my dick, which had already started to go soft. “Not likely, Mr. Green, not likely,” he said, spitting tobacco on the ground. “Not when you gotta outrun Mr. Peck here.” He sidestepped to the cage at my right. “Now that’s some pecker you got there, Mr. Peck,” he said, laughing at his own pun. I took the risk of a sideways glance and saw that Gill Peck’s morning hard-on was indeed enormous, jutting a good ten inches past the bars of the cage. He was clearly proud of it, pressing his body against the cage door to make sure it stuck out in all its glory.

I suspected Gill had assumed the drawl as a cover, to play the role Mr. Thompson expected of him. Or maybe he relished the role of black stud and was getting into the part. No matter, we were all playing our private roles in this kinky drama—me, Gill, Mr. Thompson, Lillian, Mistress Hunter—all of us. We had all freely consented to this alternate reality, master and slave alike. I wondered about that for a second, thinking, none of us is truly free . . . we are only free to choose to what—or to whom—we submit. I hoped I had chosen wisely.

The Kinky Woman At The Store (2)