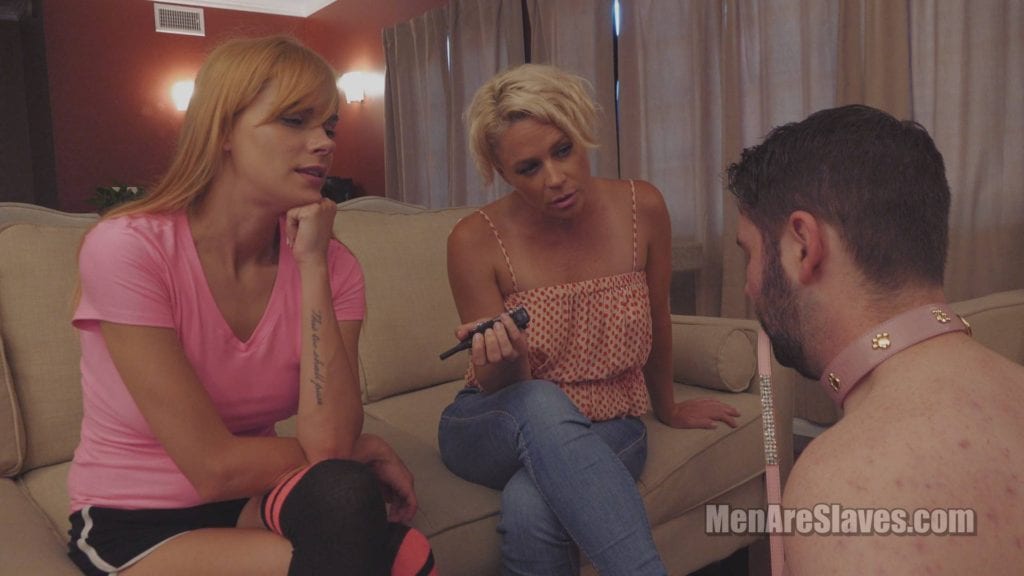 Vicky and her hubby Adrian had just arrived at the new visitor kiosk at the femdom village. Adrian was ordered to do a physical upon arrival where they would take his fingerprints and photograph his face and naked body. The secretary who took Adrian’s stats was surprised to see he was wearing a cock cage. “That’s the first time that a subby hubby arrives with a chastity belt on. We usually provide outside visitors with one,” she said to Vicky. “He has been in chastity for three weeks, we wanted to spend the weekend in town to continue his training as a subby hubby.” The secretary finished taking the couple’s data and placed the distinctive green collar on Adrian’s neck. “I have a suggestion,” the secretary said kindly to the submissive.

“Remember here we order and you obey. You speak when we tell you to speak. You don’t initiate conversation and you are not allowed to look the dominant woman directly in the face. This is very important.” Adrian looked at the secretary and smiled, “As you wish, madam.” All of a sudden, the secretary slapped him across the face and Vicky slapped him on the other side of the face. “She told you not to look at her directly,” Vicky said scolding Adrian. “Well done Miss Vicky, here we discipline our subby hubby rebels with a firm hand,” the secretary said as she gave some brochures to Vicky. “Have a pleasant stay in town,” she said as she was allowing them to pass the entrance gate.

He’s Trying To Cover Himself

It was early morning but already many people were on the streets. All the ladies were accompanied by their submissives who were doing some sort of manual labor, serving their dominant woman or receiving some form of punishment. It was the first time that Adrian was completely naked in front of other people so he instinctively covered his genitals with Vicky’s purse.

A police officer stopped the couple, “Excuse Madam, your slave is trying to cover himself with your purse.” Vicky turned to look at Adrian, both looked at each other. Vicky noticed how some ladies and the police looked at the couple closely. She closed her fist and hit her subby hubby in the stomach. “Who gave you permission to cover yourself?” Vicky said shouting at her subby hubby.

Menial Tasks Are Given To The Submissive Men

Several ladies watching the scene unfold applauded Vicky’s reaction. The police officer gave Vicky a dog leash, “Will you let me give you some advice?” The police officer said to Vicky. The female officer took both of Adrian’s hands and put them on his back. She grabbed the handle of the suitcase and placed it in his mouth. “Now you can cover yourself and carry all her belongings.” Vicky tied the dog leash to the collar on Adrian’s neck and said, “Thank you, officer, I will punish him appropriately later.” The ladies watching the scene applauded Vicky as she walked towards the hotel.

The hotel they stayed in had facilities so the ladies could rest, relax and have fun. The cleaning and maintenance work was given to the submissive men who accompanied their ladies to the hotel. Therefore, when Adrian and Vicky arrived at the hotel, he was immediately given maintenance tasks. “Mop all the floors of the hotel and clean all the bathrooms starting from the ground floor,” said the owner. Adrian tried to respond but Vicky put a muzzle on his mouth. “I think it’s better not to say anything dear, I’m going to go for a walk around town. Get to know the place,” said his wife smiling. She left the hotel leaving her subby hubby to work on his assigned tasks.

Vicky walked through the streets of the town, which were clean and tidy. The rustic houses were painted and well-kept. She noticed that on the main street there were several businesses. Most of them were women’s clothes, shoes, and accessories for women and some restaurants. There were also femdom-themed sex shops so the ladies could buy items to use or have fun with their subby hubby. Vicky arrived at the town center where a group of submissives was on stage.

The Only Meal Of The Day

While Vicky ate and chatted with some ladies about the event, Adrian finished his work just in time for lunch. Several submissives were on their knees in a row waiting for their food. One of the ladies took the muzzle off one of her submissives, “Thank you I’m very hungry,” said the submissive without thinking. All of a sudden, he felt someone touch him on the side. It was another submissive that made a signal to keep silent, fortunately for him, none of the ladies heard him. The dominant women served their food in dog dishes. “Remember subs, don’t waste any of it. It’s the only meal you will receive all day,” said the hotel owner. Adrian could not protest and had to eat the bland food that was given to him.

Vicky returned in the afternoon. “Hi honey, I have a surprise for you,” Vicky said as she grabbed the leash forcing him on all fours. Both of them left the hotel to walk towards the town center. Once they arrived at the town center, Vicky and Adrian met with the event coordinator, Sarah who was waiting for their arrival. “Well, well isn’t he a nice looking subby hubby,” said Sarah checking out Adrian’s body.

He Can’t See But He Can Feel

“Do you still want to use the accessories on him?” “Of course, I would love to use them on my subby hubby,” Sarah gave Vicky a wooden box. Adrian was confused when they opened the box and placed it on his head. Both ladies held the box while Adrian’s head was in it. The box limited Adrian’s senses but not his sense of touch. The two dominant ladies guided him onstage with several submissives and a crowd of spectators already waiting for the show to start.

The ladies put the harnesses on and gladly penetrated their submissives, gyrating their hips back and forth. All the submissives began to get hardons but none were allowed to be released from their cock cages. At one point, Dani stopped and said, “Ladies, I would like to invite you all to participate in the session.” All the ladies including Vicky allowed a dominant woman from the audience to penetrate her submissive. While one of the ladies penetrated Adrian, another lady, Maria accompanied by her submissive wearing a mask approached Vicky and said, “Excuse me, Miss, today my submissive is allowed to remove his cock cage and have sex. Would you allow him to penetrate your submissive?”

Vicky looked at the submissive and immediately lusted after his ripped body. She had always fantasized about sexual relations between two men. “Of course, he can.” Maria handcuffed her submissive’s arms behind his back and removed his cock cage. Vicky removed the box on top of Adrian’s head and his cock cage as well. “Now you’re going to enjoy sex like never before,” she told Adrian while looking at Maria’s submissive who already had an erect penis.

Exchange The Boxers For Women’s Panties

At one point Maria removed her submissive’s mask so he could see who he was penetrating, “I told you today you would have sex, but I didn’t tell you with whom,” she said laughing. The subby hubby was shocked and terrified. Never could he have imagined he would be forced to fuck another man. The ladies in the crowd laughed and applauded. The two submissives and the lady continued to penetrate each other.