As far as I remember, I was about 5 years old and I remember very clearly being in painting class at my first Infant School…

We were asked to paint a picture of the seaside, and yet most of us, I guess,  had never seen it let alone knew what it looked like.

I started what I thought the painting might look like and as it appeared satisfactory to me a young girl came over to me and looked at what I had done. Her name was Kathleen.

So I went over and looked at it and knew straight away that it was far better than mine.

When she had asked me what I thought of it, and I  told her that it was very, very good, she instantly declared:

There was no way I could deny that and I felt inferior.

I asked her to show me how to do it and she did and i was even more impressed and felt even more inferior.

My first fantasy about surrendering to a girl for sexual favors! 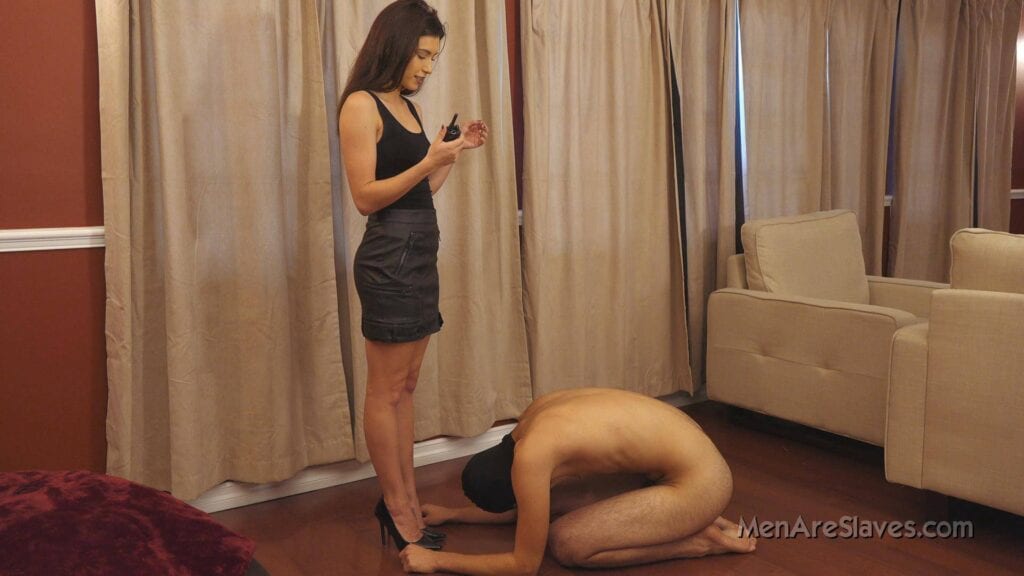 Time passed and I became just a normal child growing up. When I was about 12 I encountered a very pretty girl at School called Wendy. She was dark-haired and wore her hair in a Bob. She had a girlfriend who was always with her and she was called Ann, ( I think).

I don’t exactly know when it happened but as I fantasized about Wendy, and knowing all the time that all the other boys fancied her, I thought  I would need to offer her far more than they did.  I did not feel altogether confident with girls and I did not find myself attractive.

Of course, it never happened that I got to know her, nor have sex with her, but the experience of surrendering to a girl for sexual favor was now to be the norm.

After Junior school, my fantasies grew even further…

During the time at my second Infant School the teacher used to tell us stories about the Romans and the Egyptians, Greeks etc, and almost every time they mentioned; ‘slave’ i would go ‘red’.

I bought a large number of magazines in those days and the following years and days thereafter.

At the age of seventeen with my sap now greatly rising and having hard-ons at almost any girl who caught my eyes I found out that my Artistic talent had developed and I was now so confident of my abilities that I wanted to become an artist so strove to go to Art College. Again this was the beginning of the Beatles and the Hippie Culture and Art Colleges were hotbeds of sexual appeal. We used to have nude models there of course but they were mostly unattractive. I did take a fancy to one girl at College but timidity and sexual inhibitions lay in my way and again I could not engage with her or anyone else either.

Then, A trip to London

Then one day at Art College we went on a trip to London and that really opened my eyes quite a bit. There was SOHO and its Strip clubs and dens of iniquity which I found extremely fascinating and of course, there were the ‘Dirty ‘Bookshops.

I then saw the Newsagents Windows with their Cryptic Card Messages in the Windows and later on were the ones in the Telephone Boxes too.

Now, these really got me going, as many were obviously prostitutes and many also did Domination; Spanking; Caning, and the like, which equally I grew to like very much indeed.

Later on, I became engrossed with Contact Magazines and resolved to visit a Mistress sometime after the age of 23 but certain things stood in my way. I had very little money or was having to go to work. That was what largely held me back.

I was still very much of a Virgin when finally a the age of about 22 my Girlfriend and I had it when we were on a boat on the Norfolk Broads.

At last, I knew a woman and felt delighted of this passage into manhood.

When my Fiancee finally dumped me to marry another man I once again became a Free Man.

I went to London again and decided to visit a Mistress and eventually settled for just anyone as I was getting desperate by this time. She was fat and unattractive and I saw very little of her during the session, as we were in a dark basement in Earls Court somewhere and she merely whipped me and whipped me until she was satisfied that I had had enough. I  was very we’ll be marked all over my back, legs, and bottom; and I recall her saying how well I had stood up to it; and said “Look how I’ve marked you”.

I was thrilled that at last I had done what I had dreamt of for so very long and went home on the Train very sore but very, very satisfied.

This became the start of many attendances over the years and I can remember many of them too…….

The Night I Met this Gorgeous Mistress