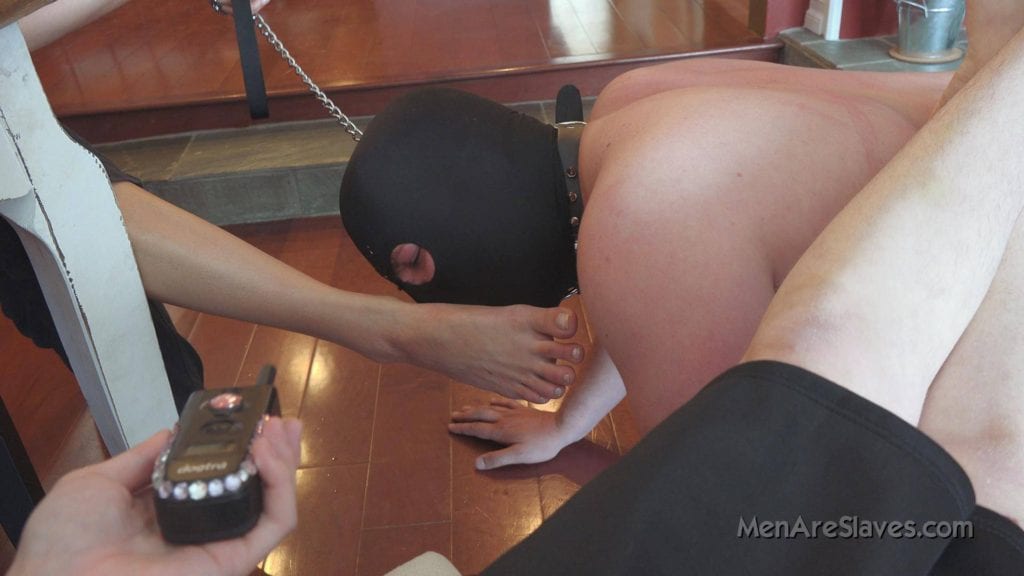 Amanda, the dominant student was in the Masters program at a prestigious university. Since childhood, she had a talent for the applied sciences and it was no surprise that she decided to do her Masters in Biochemistry. The dominant student was preparing her thesis on the effect of drugs on the brain chemistry of mammals. She spent months preparing an aphrodisiac drug she named XY-84 created with medicinal plants. During one of her verification tests, she discovered an interesting side effect on one of her test subjects.

The test with rodents turned out to be positive and not harmful to the test animals, but the rodents behaved differently. The dominant student discovered the rodents remained motionless until she gave them an order. For example, if she said eat, they ate until their plates were clean. If she ordered them to run, they ran in circles without stopping. Even when she ordered them to stay still, they remained motionless. The rodents continued this behavior until the drug was fully metabolized in their system.

The Perfect Test Subject For The Dominant Student

Amanda tested the drug and found that it was not toxic in large quantities and had this temporary side effect. “It’ll be a while before I will be allowed to test it on humans,” she thought, “But what if I skip some protocols? After all, it has proven to be non-toxic to mammals and I also know who I can use as a guinea pig.” The young scientist smiled mischievously at the thought of her perfect test subject. She calculated the dose for a human and left the lab and ran to the dorm rooms where she lived. The dorm rooms were co-ed with all kinds of students but the worst student who lived there was Jeremy. A boy from a wealthy family who believed all the girls wanted him. “A misogynistic asshole in my opinion and the opinion of many other female students,” she thought to herself.

Amanda went into her dorm room, which consisted of a desk with her computer, a bookshelf, a bed, a small refrigerator, and a kitchenette. She hid a camera between two books on the bookshelf to record the scene. She changed her clothes and put on a short-sleeved red blouse, black jeans, and black tennis shoes. The experimental drug was placed inside a cup of soup. She left her room and went to the common area where she expected Jeremy to pass.

It didn’t take long for the Jeremy to arrive, and just as the dominant student was about to take the first sip of her soup, Jeremy took it from her hands and with one gulp drank the entire cup, “Thanks babe, the soup was awesome”, Amanda pretended to be upset with Jeremy,” I knew he would fall into my trap,” she thought. The dominant student with a stern face walked back to her dorm room and as expected Jeremy followed her. She entered her room and Jeremy followed behind her.

“Come on, babe, don’t get mad, I know you can make another soup.” Amanda simply turned her back to him. “Sit on the bed,” Amanda said sternly. Jeremy did as he was told and sat on the bed. Amanda decided to wait a while to see if it was just a coincidence. She sat at her desk and worked on her computer for a while. After five minutes passed, Jeremy spoke up, “Hey babe, what’s wrong? I can’t move,” he said terrified. Amanda turned around and looked at the paralyzed boy, “That’s because I haven’t ordered you to move “puppet,” said the dominant student as she looked at Jeremy.

Take Your Clothes Off Jeremy

He tried to move but his body was paralyzed, “What the hell is going on …” Jeremy’s voice was breaking up, “Raise your left arm,” said the dominant student. Immediately, Jeremy raised his left arm. The boy had a terrified look on his face and could only moan because his mouth was beginning to paralyze. “The drug is already taking effect on your entire body, don’t worry, it’s only temporary, but for now, I am going to have fun with you,” said the girl as she locked the door.

Amanda sat on her bed, “Now stand up and take off all your clothes,” Jeremy stood up and just like an automaton did what he was told. The dominant student looked at her puppet with lust and noticed the effect she expected to see on her new test subject. Jeremy’s large penis was fully erect, “At least you were right about something you always brag about,” she said. Amanda could not contain herself anymore and began stroking his hard cock. Although he could feel what was being done to him, he could not move. Amanda punched Jeremy hard in the stomach but he did not move or make any gestures. “This is boring, I want to make you scream and listen to you suffer,” this time Amanda kicked the boy’s testicles and he started screaming in pain.

What Is A Dream, Or Did It Really Happen

Amanda stood in front of him, “Now I want you to lie on your stomach and lick my sneakers,” Jeremy laid down on his stomach and started licking her sneakers. When he was done, Amanda said, “Stop and lie on your stomach,” Jeremy did and Amanda stood on the boy’s back, “Do twenty pushups and I want you to count them all,” He immediately started doing pushups until he was done with all 20 of them.

Finally, Amanda gave Jeremy a collection cup, “Fill it with your semen, but I don’t want you to feel any pleasure in doing it.” The boy masturbated several times, filled the collection bottle completely as indicated, and did it without taking any pleasure in it. “Get your clothes, go back to your dorm room and go to sleep,” Jeremy took his clothes and did as he was told. He left naked and went back to his room passing several girls who screamed at the sight of him. Meanwhile, Amanda stored the semen sample in the refrigerator and reviewed the video she made.

The Response From The Mineral Spa

The next day, Jeremy thought he had a dream that Amanda dominated him and he walked naked through the campus of the university. Amanda checked the status of the sperm from her test subject, “The semen seems to be in good condition, the sperm is totally healthy,” Amanda wrote in an email. She knew that not everyone would be interested in her discovery, so she decided to send her research and video to the Mineral Beauty Spa in Mineral, CA. Three days passed before she received an answer. When she did receive a response, it was from the Director of The Mineral Spa, Dr. Demeter inviting her to take drug XY – 84 to the hospital and complete her thesis there with all expenses paid.

The Dominant Student And Her Experiment (2)
Previous

The Journey Of A Submale Slave (5)