The Submissive Males Notice Alice Staring At Them

Alice approached the cells to take a closer look at the boys. As she approached, some of the submissive males timidly raised their heads to look at her. Their cocks began to swell slowly, then harden and stand up harmoniously pointing towards the ceiling. Alice felt a tingle between her legs at the sight of these hard cocks standing up for her. She felt the urge to buy all the submissive males and make a huge harem of slaves for her, but she had only budgeted to buy one for now. Perhaps later if she was satisfied with her purchase, she will buy a second or even a third slave.

Alice slowly walked to a particular slave that caught her eye. Finally, after inspecting him for several minutes, she decided on a young man, brown, thin, and athletic with an absolutely beautiful face. “That one,” Alice said. That’s the one I want.” “Number H-455?” Sylvia said. “Good choice, you have good taste. I shall start processing him now.”

Sylvia pulled a remote control from her pocket and pressed a button. Immediately, the floor of the boy’s cell began to sink into the ground. Soon the slave disappeared altogether. Then, with a roar, the floor in front of Alice opened and the slave appeared, still kneeling on the metal platform.

At-Home Delivery Of Your New Slave

Sylvia leaned forward and abruptly removed his gag so Alice could observe his face without the ball gag. She removed the collar and handcuffs. “On all fours,” she ordered with an assertive tone. “Turn around, lift your ass up very high, and spread your butt cheeks.” The boy obeyed and revealed his asshole to his future owner. Alice inspected the anus of her new slave. Satisfied, she ordered him to turn around and show her his penis. She started caressing his cock and took great pleasure in listening to him moan while she did this.

Three days later, Alice was woken up by the doorbell. Still, in her nightgown, Alice opened the door and found a young woman with long, blond, hair in a uniform, similar to one Sylvia wore. At her side stood the slave Alice had bought. The young woman carried a box with the materials and a clipboard with papers for Alice to sign before she could officially claim her slave. The slave already wore a ball gag which was well fitted in his mouth. 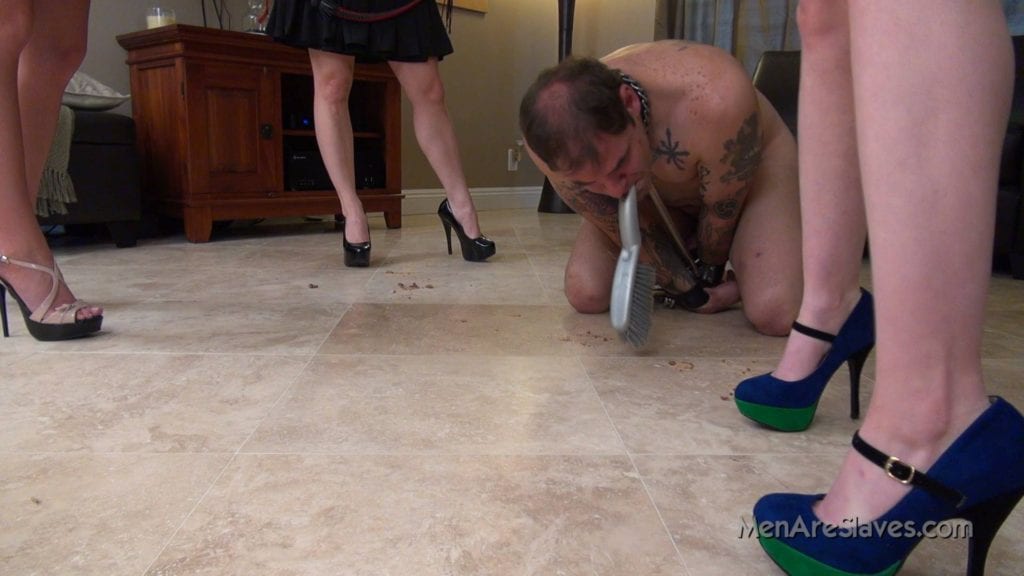 I Can Do Whatever I Want With Him

“Remember,” said the delivery woman with a big smile, “officially your slave is not human. You are free to do whatever you want to him.” Once the papers were signed, Alice closed the door and brought her slave to the living room by the leash attached to a leather collar around his neck.

The slave was totally naked. Alice had him stand in the middle of the living room so she could stare at him. Alice now owned a sexual servant. A sex toy she could use whenever she wanted, to do whatever she wanted, without any regard for his feelings or desires. She could torture him if she wanted to, there were no rules as to what she could do to him.

For now, Alice wanted to set the tone by stating the rules her new slave must live by. “On your knees,” she ordered, adopting an authoritarian and cold tone. “Get comfortable in that position because you will be on your knees when I don’t need you and I have not given you any tasks to do, is that clear?” The boy nodded. His ball gag deprived him of the opportunity to speak.

The Rules To Live By

“I’m going to set some basic rules right now so that you have them in mind for the rest of your life. First rule: The only way you are allowed to move unless I say otherwise, is on your knees. You do not have the right to stand up or sit down. Standing up and sitting down are positions reserved for humans. Second rule: You are strictly forbidden to speak unless I expressly authorize it.”

“Fourth rule: Regarding your meals, I warn you right now, I do not intend to spend money to feed you with human food unless I want to reward you for a job well done. You will be entitled to two meals a day: One in the morning and one in the evening. I will decide at that time to feed you with my body odors or my natural fluids. Fifth rule: You will use the bathroom once a day, in the evening, under my supervision.” “Sixth rule: You are strictly forbidden to masturbate or take pleasure in any way without my permission.” Alice stared at her slave for a moment. He seemed to understand this rule well.

I Will Name You Tommy-Boy

“These rules are final and are unlikely to change,” said Alice. You will be severely punished if you break one of these rules. You may have been trained to have a high pain threshold, but I am capable of things that you cannot even imagine. I will make you suffer for pleasure but those sessions will never compare to the pain you will feel if you disobey me. Is that clear?

The boy nodded. Alice smiled tenderly and leaned over to remove the ball gag from his mouth. “I will call you Tommy-boy,” she said. I had a dog with that name a long time ago. You remind me of him a little bit. So you will answer to that name from now on.’ Seeing that the slave was silent, Alice remembered the second rule she had stated, ”Oh, you can speak for now until I tell you otherwise. “Yes Mistress, understood.”

My Dominant Lady and My Slave Training (4)