The Journey Of A Submale Slave (5)

Shaved From Head To Toe

My dick was examined closely by the three women there, Alejandra, Elsie, and Maria. Alejandro it turns out was transsexual. They were joking around speaking in Spanish. At around 10 am, I was strapped into a historic barber chair and they applied a cream on me that stung a little and shaved my head and body. I was escorted to the shower and rinsed down with cold water. All my hair was gone and I was brought back to the chair. They looked at my mouth and asked me if I had any toothaches. I pointed to the two teeth that were aching me. They pulled those teeth and 2 more teeth in the front. “My rabbit teeth,” Maria said. It s not enough, we need to pull more teeth,” Elsie said. “This will be better.” 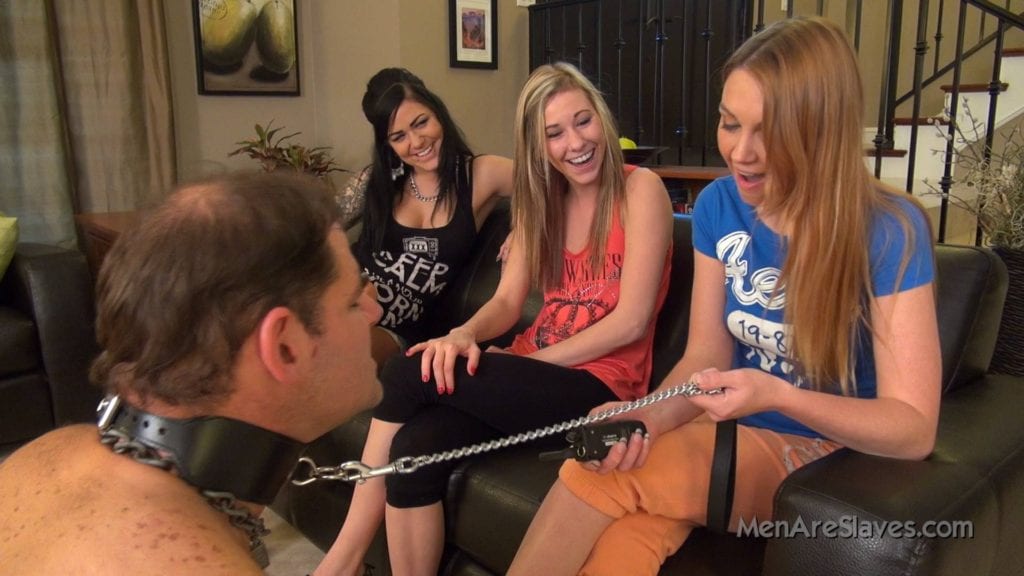 When it was over, Maria gave me some clove oil to put on my gums. In the end, I was virtually toothless in the front of my mouth. “Talk to us now Juanita..como te llamas?” Maria asked. “Juanita,” I answered. “Muy bien.” She shoved a big dildo in my mouth and tied a scarf around my head to hold it in place. “Silencio es su nueva realidad Juanita.” “Si señora, I said. “You have to look your part, as a poor maid,” Elsie said. “Si señora, thank you Señora.” Then, they took off my chastity belt and examined my dick.

Elsie explained the procedure they were about to perform. It’s called a Slavemaker piercing. A series of 4 studs implanted in the foreskin of my dick. The studs were about 5/8 inch standing out perpendicular to my dick. They would be inserted and the skin around it would tighten with the sutures. The purpose is to create something visually pleasing to my Femdom Queen but also functional. It would be attached to a cage that would prevent intercourse and bad thoughts. Then, my butt was branded with a brand that said HSMA. I had no clue what it meant but I found out later it stood for Hacienda De San Miguel De Allende, or something similar. It was a brand that they were still using on their cattle.

The Humiliations Excited Her

How did I react? I was compliant because I knew that all this had been decided beforehand in the washrooms of a ritzy London Club where my Femdom Queen was talking to Mistress Dominique several months earlier according to what she told me. So, there I was being fitted with a tight corset, some lace stockings, some mules, and a white skirt and apron. My first job this morning was to help wash the linens and beware and to beat the dirt out of the Persian and Mexican area rugs. It was lots of work but I found myself useful and contributing to this unique experience in the way that I could. I was wearing a small sheet around my head like a chemo patient to cover my bald head.

No Time To Waste When It Comes To Mistress

“Si Senora, muy bien Señor, adios Señor.” I kept it short and sweet. A maid had no time to waste discoursing when she had work to do. At midday, a trip to the bakery tested my prowess with the high-heeled mules on the cobblestones of these ancient streets. People looked at me inquisitively and I felt at once aroused and humiliated.

I was wearing no underwear and I needed to make sure the wind did not lift up my skirt. A dog followed me, smelling the fresh baked goods. I told him, “I’d like to feed ya but hey, I got strict orders to follow. I am just obeying my Femdom Queen.” It’s so easy to obey blindly, to relieve oneself of all questions of conscience, of good or bad, and just repeat the orders of my Mistress. In the distance, I could hear the Mariachis playing somewhere in a street full of echoes of people, music, and good cheers. This was not my destination. My strict orders were to go and come back. “Vamos Juanita, y regresa con la comida pronto.” There was no other option.