My First Encounter With Her

My first encounter with Dominant Mistress Joanne was at the age of 19 in the Boston area. This was well before the internet age. Communication was through personal ads in the underground newspaper under alternative lifestyles. There were all types of ads, but one was from a Mistress advertising for a slave. I wrote to the PO box. Within a week I received a reply. We continued to write, exchanging letters every week or so (due to mail delivery times) until finally after about 1 month and 1/2, I was given a phone number to call and a time and place to meet.

Anyways, she did not fit my image but when she held the door open and invited me in, I followed. She said we would sit, have tea, and talk. On her round kitchen table was a teapot in a tea cozy, with a plate of oatmeal cookies, cups, a saucer, creamer, a sugar bowl with sugar cubes, tongs, and napkins. She was very keen on instructing me on the proper way to pour her tea.

I was to refer to her as Mistress Joanne and she told me to pour her a cup of tea. It was to be an inch below the rim, and when I replaced the teapot, the handle was to be facing out, centered in the middle. I was asked to put cream and sugar in the tea and use the tongs. It was all very proper and we made small talk. I helped myself to a cookie as I had not eaten lunch.

Dominant Mistress Joanne asked how the ride was and stated what a beautiful day it was. She also would pepper her comments with more direct questions. For example, ” Isn’t it nice and sunny today? Oh, and when was the last time you were spanked?” I’d get real shy and say, “Not since I was a kid, and she would say, “Oh, well you are long overdue for one, young man.” We’d continue along this line while we had our tea. She’d reminded me of proper etiquette and manners again. Then she asked, “Have you had a butt plug or dildo in your ass, Robert?” I blushed and said, “No.” She continued,”Do you think you would like one there?”

I said, “No, I don’t think so.” She laughed merrily and said we’d see about that. I was nervous and ate all the cookies (five) and she got more. I also drank lots of tea, perhaps 5 cups in the 20 minutes we were talking. She told me she was a slave to a Master but he had allowed her to have her own slave. I would not be having contact with the Master ever but was interviewing now to see whether I was suitable to be her slave. So far she liked what she saw. 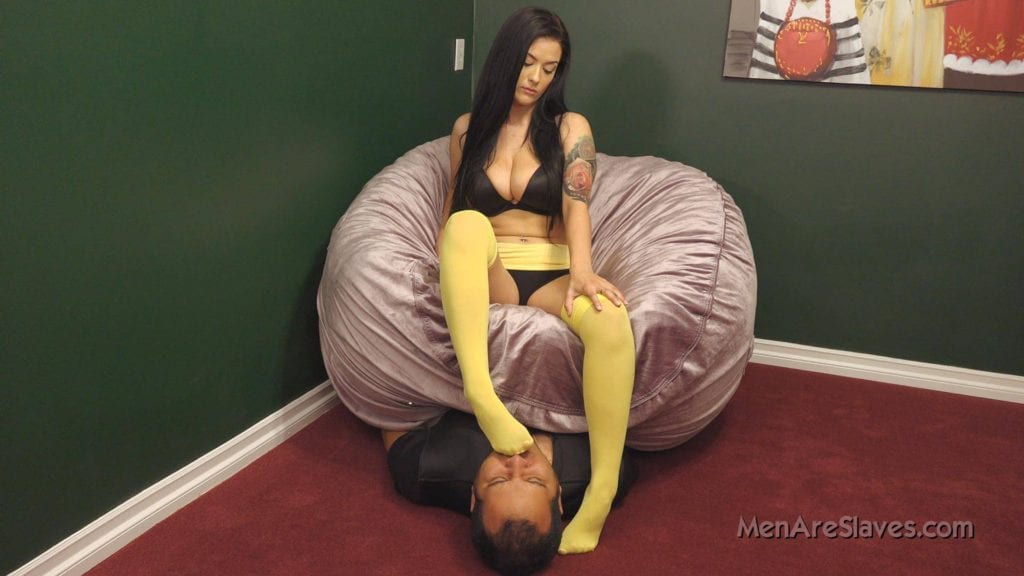 Ask Permission To Be Excused

Finally, Get To Use The Bathroom

And so it went on this type of dialogue and I was afraid of wetting myself right then and there and as though my bladder may burst. Finally, she gave me permission to be excused. However, I was to undress in the bathroom and fold my clothes neatly and then go to the back bedroom. Once there, sit on the chair and wait. I thanked Dominant Mistress Joanne and went to the bathroom.

I did my business and then undressed. I thought to myself, she can’t mean my undies either. I will keep those on, just so I don’t offend or overstep my bounds. I walked down the carpeted hall to the back bedroom and opened the door. It was an ordinary bedroom, with a low bed in the corner, a dressing table and vanity, a bureau, and one lone wooden kitchen chair in the middle of the room. I sat down and waited.

Passionate Letter From My Goddess Mistress