Best Week of My Life due to a Panties Fetish?!

By any account, this had been a remarkable evening, and right on the heels of a remarkable week.  First I win the largest prize I have ever won this week, and next I meet a lady this evening who completely turns the tables on me and I loved it.  She caught me sniffing her luxurious panties, had me on my knees grinding my face in her bush, and finally had me on the floor riding my face “cowgirl” style.  Trust me when I say that was the tip-top of sexual experiences in my life.  It just doesn’t get any better. 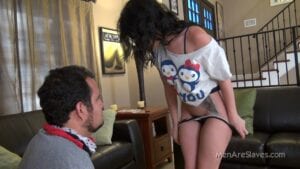 So now we fast forward to later that evening, or by now morning.

She sits me on a couch in her living room and says she will be right back.  She also suggests that some of her girlfriends might want to come over to play.  Oh My God, what have I stepped into?  Normally, I think I would be worried about being so outnumbered.  Tonight seems to have changed everything.  This gal has taken away my control of almost anything here, and I’m absolutely loving it.  Calling her girlfriends would seem to be an extension of that.  Let’s sit back and see what happens.

I do catch a few bits and pieces of conversations, but not enough to understand what is unfolding.  She mentions my panty fetish in addition to what happened between she and I.  Or more appropriately, what she did to my face.  A few chuckles here and there and some see you real soon’s.  That is about it, so now all I can do is sit and wait.

I didn’t have to wait long as two of the gals arrived together in about 15 minutes.

My “hostess” took them into the kitchen, but on the way by there were plenty of snickers as they thoroughly checked me out.  I felt like a piece of meat or something they were considering at the store.

A few minutes later another arrived and then a fourth in a few more.  Same reaction, and now they are all out in the kitchen.  The chatter was intense as it seemed they were planning my fate.  One thing I must say.  They were all gorgeous and each seemed to carry that superior attitude.   Since I had been enjoying the “changing of the guard” earlier, I figured or hoped I would continue through whatever was to come.

Moments later they all came into the living room. 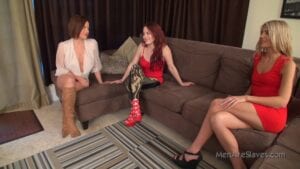 Judy told me to stand up and move to the side.  Not one of them had anything on from the waist down and each was holding a pair of panties.  Judy asked them to sit on the couch and then told me we were going to play a little game.  She said this was since I enjoyed sniffing panties so much and was sure I would enjoy it.  She explained that not one of the ladies had their own panties at which point they each placed them on the coffee table.  I would be allowed to sniff each of them and then sniff each pussy.  My task was to match the panties to the pussy.  If I was successful, my reward was the lady would ride my face “cowgirl” style the way Judy had.  If I was not, the first phase was a good spanking and then I would service the lady’s other hole on her backside.

I picked the pair of panties

To start with and gave them a wonderful sniff.  I wanted to ask Judy to invite some more friends over.  Then I proceeded to put my face between each gorgeous pair of thighs and inhale deeply.  By the time I had finished all four, my head was swimming with lust.  I had no chance of getting the correct match and of course, didn’t.  Judy was standing there with a strap and told me to get down on all four.  I did and she spanked me a few times.  I was surprised that it didn’t hurt like I thought it would.  It did feel humiliating in front of all the ladies, and again to my surprise, I found I liked that.

The transformation of La’srry or something along those lines.

This was wonderful.  Judy commanded that I begin on the first ladies’ backside or ass hole if you will.  I spent a few moments kissing and licking both cheeks.  Then I felt Judy’s firm hands grab my head and shove it right to the ladies’ ass.  I began licking and I’ll say it was a bit tangy, but not bad.  I licked the lady and she begin to moan in pleasure and pow, instant rock hard erection.  Just her sounds were enough to get me to the edge.  As I continued mouthing her hole, she reached back and grabbed my cock.  It was probably the quickest eruption I’ve ever had and it was great.

Shortly after, the lady came also with squirts all over the place.  Judy informed me that I would need to lick her clean first and they lick up all the mess on the floor from the two of us.

And so it went for the next three ladies.

I of course got them all wrong.  Now Judy escorted her guests to the front door and thanked them all for coming and playing.  She said they would probably be playing again soon to which there was mass approval.   Goodnights and hugs went around and quickly they were gone.

She looked at me and said she was glad I was finally warmed up.  Told me to take off everything and lie on the floor.  Some other time I’ll tell you what she did to me then.  Suffice to say that as much as I had enjoyed everything with her friends, this was many times better.  What an incredible week.

Becoming My Wife’s Sex Toy Through Humiliation; How it All Started

How to Properly Fit Your Sub Into a Chastity Belt