I returned to the kitchen to retrieve my breakfast and as I sat down I looked over at her and smiled as she lifted her feet and placed them on my lap. This was not at all unusual. As we began to eat, she made it very difficult for me as she began to rub and play with me every time I tried to take a bite. It was very obvious that she wanted to play and was completely enjoying teasing me as she ate. I was having a very difficult time eating as she continued the entire time I ate until we were done eating breakfast.

After breakfast, as I took our dishes to the kitchen to clean up she continued to tease and taunt me, slightly exposing her lingerie beneath her robe as if to say, “I want you to come play after you’re done.” As I finished washing the dishes, she disappeared back into the bedroom. I took this as a direct invitation and was quite aroused and excited as it seemed as though she desired some vanilla sex. This was something she and I enjoyed every now and again. I entered the bedroom to find her laying on the bed with the sheets pulled over her and her robe lying on the floor next to the bed.

I quickly dropped my robe and crawled into bed next to her, wrapped my arms around her and began to kiss her as she touched me and got me even more aroused. Just as I was about to roll over on top of her, she pushed my head down to her waist and quietly said, “I want to have the best orgasm in the world. Now get to work and you will be handsomely rewarded.” My tongue went straight to work dancing around her thighs and pussy. She was absolutely dripping wet with excitement as I licked her up one side and down the other, flickering my tongue over her clit as she gyrated and pushed herself into my face.

After about ten minutes she began to quiver and exploded on my face insisting that I continue to lick her clean. Then, I slide myself upwards and was about to enter her when she rolled over and said, “Thank you again my slut. I knew you would do a good job. I need to rest a minute.” I curled up next to her, throbbing with anticipation and she reached down and began to stroke me a bit, keeping me erect for the next forty five minutes as we lay cuddled next to each other. She then rolled over and looked at the clock.

With a bit of alarm in her voice she said, “Oh my, look at the time. I have an appointment in an hour.” She climbed out of bed and said she was going to clean up and that we could continue later that afternoon, so please clean yourself up while she took a shower. I was now completely frustrated and wanted her so badly I would do just about anything. My balls were full and wanted release. As she went to one shower I went to the other. A cold shower was all I could do to not pleasure myself but I knew she would be aware and would not approve. 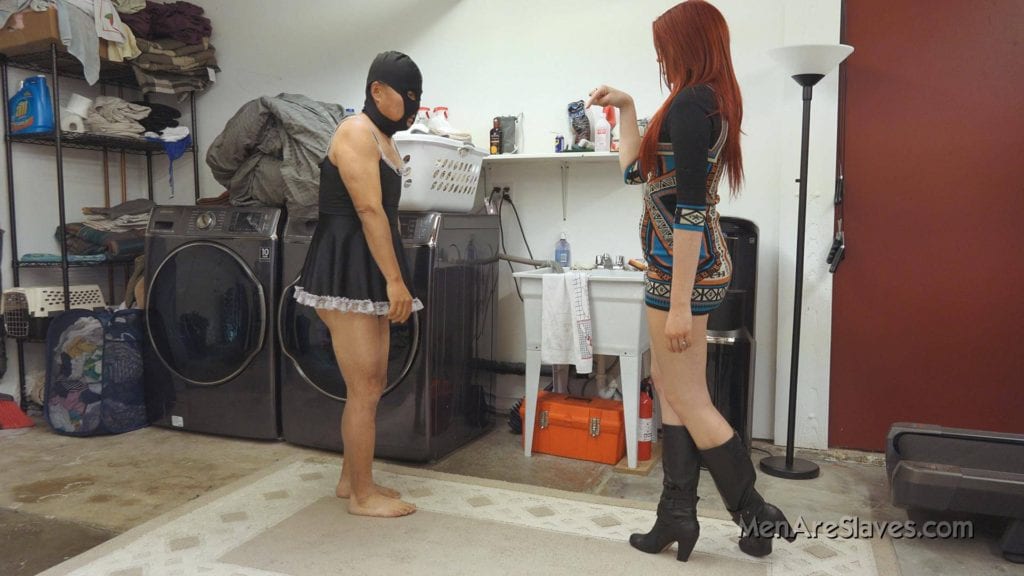 Once we finished showering, she asked me, “Sweetie, will you please take me to the mall to my waxing appointment? I really don’t like driving afterward as I am usually a bit sensitive.” I agreed and got myself dressed. For taking her to the appointment, I picked out jeans and a turtleneck to wear. It was a bit chilly this morning. When I returned to see her, she was dressed and ready, looking so hot and sexy in a rather short skirt and top with a plunging neckline.

I couldn’t help but wonder what she was thinking given the weather. But I ignored the desire to ask and just enjoyed gazing upon her. I almost came in my jeans. She was very observant of this and reached down to stroke me a bit more saying, “I’m sorry baby, I lost track of time, I promise we’ll take care of you later.”

We got in the car and proceeded to drive to the mall that was a bit out of the way from our home. I thought this was rather strange as we passed several others on the way but I did not question it. I just drove and we engaged in some casual conversation on the way. She seemed to sort of ignore what had happened earlier and allowed me to calm down and cool off a bit the rest of the way to the mall. We made our way into the mall. On the way to the salon where she had said she had the appointment, she decided to stop at Victoria’s Secret telling me that she had forgotten to wear panties and she would like me to pick out something that would really turn me on for later when we returned home.

I was a bit uncomfortable as we made our way into the store and a couple of the girls working there gave me some rather interesting looks as we were shopping. While I didn’t know it at the time, these very same girls were personal friends of hers and she had something completely different in mind. I selected a cute pair of panties for her and she immediately went to one of the girls and whispered something to her. The sales girl took them and went back to the drawer retrieving a different pair of the same panties.

She then instructed me to come with her to the changing area. I knew it was against store policy for us both to go into the changing room together so I wondered just what she was thinking. She looked at the sales girl and said, “I think we need a bra to match these as well.” I didn’t think too much of that until the next words coming out of her mouth were, “But I have no idea what size he will need. Would you please measure him?” I knew right away that this was no regular Saturday of errand running. Also, I knew that if I didn’t play along I would be in for more torture and torment than I would be able to stand for the next week.

The sales girl giggled and instructed me to lift my shirt so that she could measure my chest, which I did rather reluctantly. I then lowered my shirt and gave my BDSM Mistress a bit of a look as if to say, “I can’t believe you’re doing this to me.” She smiled back and gave me a kiss on the cheek saying, “Thank you sweetie. I just don’t think it’s fair that I get to make myself pretty for you without allowing you to do the same for me. You know I love you as my little slut.” The sales girl quickly returned with a matching bra, removed the tags, giggled a bit and pointed to the dressing room saying, “You’re welcome to change in there. We’ll keep an eye out for you so no one else knows how much you like your girls’ lingerie.”