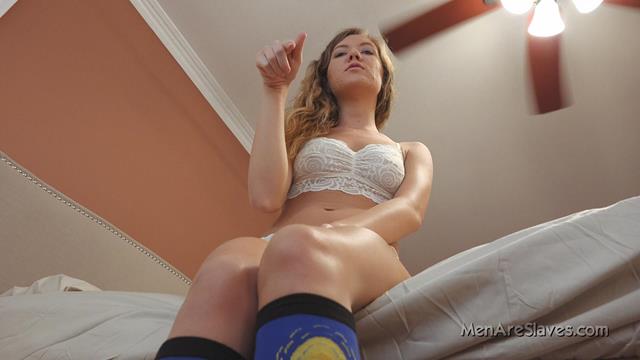 I refuse to think of this lifestyle as only fantasy if we are both stay dedicated to the outcome. I think anything is possible.  Indeed, I have no intention allowing him to change his mind now that we have really started.

I discussed my plans to dominate my boyfriend with some of my kinkier friends.  Like you, they all cautioned me that my plans were too ambitious.  I frequently heard the words “safe, sane, and consensual.” I was told that “scenes” needed to be “negotiated.”  They talked about S&M “play” as if it were just play and not real. Ugh, that sounded like he could back out whenever he chose! That’s not for me. Why work this hard if he could quit?

I was amused at their timidity.  I wanted something much more than a few hours of “dress up” each week that was mere foreplay.  I wanted my dominance and his submission to be real.  In addition, I observed something that they had not noticed. Maybe, they had not understood its importance.

When I dominated my boyfriend, he slipped into a psychological state called “sub-space.”  I could even tell when it happened. I noticed that at some point he forgot about himself entirely and only concerned himself with my pleasure.  Observing him carefully I began to realize what was happening.  I suspected that strong opiate like endorphins were surging through him that gave him an almost out of body experience. My dominance of him was acting like a powerful narcotic.  Even more importantly, I noted that this drug was obviously addictive.  I knew this because he craved our S&M play more and more. I loved dominating him but clearly his need was even greater than mine.

Knowing this gave me a momentous surge of power.  He was addicted to me!  More specifically, he was addicted to being my slave!  It reminded me of “white slaver” stories of men giving women heroin to obtain their sexual services.  Only my drug had no harmful effects.  Play? Negotiation?  It seemed to me that we are already past all of that. I had a man physically addicted to my domination of him!

It didn’t take much further experimentation with female domination until my man asked me to marry him.  I knew that if I agreed it could be a beginning to a new and deeper relationship.  I refused because I didn’t want to give up my freedom, but after some thought I decided that marriage could be the first step of my own deeply held desires.  However, he will have to prove the depth of his commitment before I agree to such a step.  I am eager to fulfill every fantasy he has about a dominant woman.  What he doesn’t know is that my own fantasy is a darker richer dream than he could ever imagine.

To be fair, I asked myself the same kind of questions about changing my mind.  Was I ready to take on the responsibility of taming a man? I would be manipulating his psyche and his personality in ways that resulted in deep mind control. Did I want to take responsibility for that? My lover might have voluntarily started on the road to submission but I knew that our brief journey has already changed him. Over time he will become even more malleable and open to suggestion. He will find himself doing things and agreeing to things that he would reject now.  Did I really want to take him there? Once broken, he would become my responsibility.

I deemed it important to ask these questions because I don’t think either of us would be happy if we only went part way.  Going only part of the way would be as useless as removing a splinter part of the way, or making a boat partly watertight.  Enslaving him only partially would only cause pain and loss without any real accomplishment.  Therefore, I resolved to follow our path until we reached our goal.  Asking myself these questions revealed to me how intense my own desire was to completely tame one special man.

Some may point out that I am manipulating the innocent kinky interests of my boyfriend in a careful and diabolical manner to slowly break him into becoming my slave in such a way that makes it psychologically, legally, and financially impossible for him to ever escape my evil clutches.  Yes!  I’m guilty as charged. But, to be fair, I told him that this was my intent from the very beginning.  I remember his answer was to me was, “Yes!” He even said, “Please.”

What might be surprising to someone who doesn’t know me is how uncomfortable I am with anger and selfishness in myself.  I’m turned on by dominating my man but only in the context of two explorers seeking the unusual and extreme in a loving relationship.

One of the things I am experiencing is expanding my range of what I allow myself to enjoy.  As you know, I usually keep my id under careful control.  What has been challenging and fun is to allow myself to feel anger when it’s barely justified.

By submitting to me, my submissive creates a safe space for me to explore these feelings and experiences.  I practice being more dominant by frequently allowing myself a selfish bitchy snit over a tiny lapse in his attention to me.  Knowing I can punish him without fear of ruining our relationship fills me with a deep gratitude to him.  I now have a freedom few women will ever know.

Ask a couple of questions and you get a six- page answer!

I love finally having someone to share all this with.

Slave Selection: What to Watch out for from Scammers and Scum