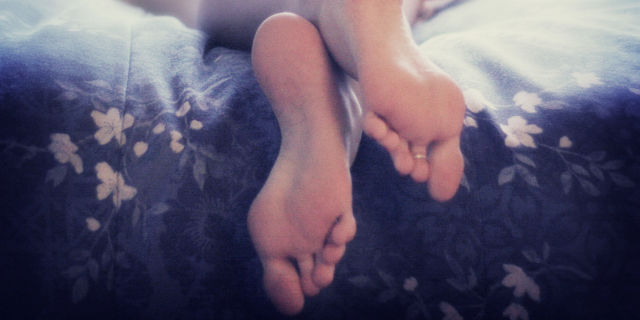 After breasts and booties, feet are the body part that turns us on most. But what is it about feet that does it for so many people? In this week’sSex Talk Realness, Cosmopolitan.com speaks with one woman and two men about having a foot fetish.

When (and how) did you first realize you had a thing for feet?
Woman A: I was 20 years old when I went from being a tomboy who didn’t really pay attention to my feet to a girly girl who went to the nail salon to get her first pedicure. I loved seeing guys go to the salon to get their feet massaged and their toenails cut. I loved how clean and soft-looking their feet were. I watched the women in the salon massage and caress the guys’ feet, and liked seeing how nice they looked after they put on their sandals. That’s when I started liking feet and I became curious to try something new with my boyfriend.
Man A: I think I was 17. Since I was young, I considered legs to be sexy, but I didn’t care much about feet — as long as they weren’t terrible-looking, I was fine. Around that age, a classmate mentioned he liked to watch videos on YouTube where women showed their feet on purpose. I knew about the fetish but still thought it was a little weird, then one day I became curious and saw some of those videos only to realize I also thought some of them were sexy. That’s when I started to notice feet.
Man B: Probably 15 or 16. I just realized that instead of the standard boobs and bums, I was obsessed with staring at women’s feet and toes, imagining them in my mouth or rubbing them on my face.

What do you like about feet?
Woman A: Men’s feet can be very soft and smooth-looking; they’re big and the shape is nice. I love the arch of a man’s foot, how it is masculine with the toes and ankles that are strong with muscle.
Man A: They’re usually soft, the shape is cute, but my favorite thing about them is that they are very curvy. There are curves everywhere, the toes, ankles, heels, insteps, and the best one, the arches.
Man B: Everything. I’m a feet man through and through.

Are there any particular types of feet (size, shape, smell, toenail color, etc.) that turn you on?
Woman A: The shape of the foot, like a size 10, very masculine, and clean and strong. I also like nicely shaped toenails. Since I started massaging feet and giving my boyfriend pedicures, I love how smooth his feet are and watching them breathe with his sandals on. It’s very sexy to me.
Man A: I didn’t realize until someone pointed it out to me on Tumblr, but most of the feet I like share three characteristics: They are around size 8 or bigger, they’re slender, and they have very high arches. Just to give an example, I think Emma Stone’s feet are gorgeous, especially because of her high arches, and they fall into the group mentioned before. I think blue and red nail polish look sexy on hands and feet, but polish or no polish, it’s the same.
Man B: I love nice arches, red nail varnish, flip-flops, nicely pedicured, slender but not too thin, just an all-round well-proportioned foot. Generally I like fresh-smelling feet, although I have been known to lick grimy feet in the past to offset the beauty.

Have you ever given or received a “foot job”?
Woman A: Yes, to my boyfriend. I think it’s fun and flirty to rub our feet against each other. If we go out to dinner with friends, he’ll put his feet in between my legs and start massaging me. I also massage him with my feet.
Man A: I’ve been with women who shared my foot fetish or indulged mine, but they didn’t seem interested in receiving a foot job, so I’ve never given one. But they were all right with giving them.
Man B: Received foot jobs, never given one.

If so, how does it differ from a hand job?
Woman A: Start out playing footsies, and let him feel, rub, and caress your feet, legs, and thighs with his. Then allow him to put his foot in between your legs and massage each other at the same time.
Man A: As I mentioned before, feet tend to be very soft, so that feels nice. Also, unless you’re dating a contortionist or someone who is an expert at giving them, people can’t really manipulate things with their feet the same way they do with their hands. We usually don’t have that kind of control over our legs, which causes the movements to be sloppy compared with a hand job. There’s also less pressure. That’s not necessarily a bad thing though — it prolongs the physical pleasure. By the way, lube is your friend if you try this.
Man B: It feels more submissive somehow, more erotic. The feel of two feet wrapped around my penis and toes tickling my balls is mind-blowing.

Do you like having your partner(s) touch or play with your feet as well, or are you only interested in other people’s feet?
Woman A: I love it when my boyfriend touches and caresses my feet after a long day at work. I sometimes get lost staring at him as he massages them.
Man A: I’m mostly interested in other people’s feet. I’m completely open to letting my partner play with my feet, but the women with foot fetishes I’ve met either didn’t like male feet or were more into having their feet worshiped, so that might never happen.
Man B: No, my interest has purely been in other people’s (women’s) feet.

How else do you work feet into your sex life?
Woman A: I like to worship my guy’s feet. I like to caress them and grip them softly with my hands. Tease his toes with my lips to kiss, give it soft licks with my tongue and suck it softly to get his attention. That will lead to other things…
Man A: Foot jobs are awesome, but they’re not the only thing you can do. You can worship her feet, which includes kissing, licking, massaging them, sucking her toes, smelling them — if you’re into that. There are different moments to do those things. For instance, I don’t mind giving my girlfriend a foot massage when she asks for one, but sometimes those innocent massages put her in the mood and can turn into something else. I love it when that happens. Certain positions, such as the ones where you can put her ankles on your shoulders, allow you to lick her feet or suck her toes. I’m also into female dominance, during which feet can be used in many ways, but that’s a different story.
Man B: Sniff them, inhaling deeply.

How do you bring up your interest in feet with your partner(s)?
Woman A: Early in the relationship, when I gave him a pedicure, he started to keep his feet clean. I loved that about him. I always look at his feet whether we are outside or in the house. I tell him how his feet look nice and smooth, then I slowly massage his feet with grip, and I like it when he says “mmm.”
Man A: I don’t have a problem with confidence about this fetish, so I just mention it at some early point in the relationship. Maybe I start by complimenting her feet, or I kiss them after giving her a massage, but sometimes during the “ankles on shoulders” positions I instinctively lick her soles and she ends up asking. The best thing is to be direct.
Man B: Stick my wife’s toes in my mouth. Just start sucking.

What’s the best/worst reaction you’ve had from someone?
Man A: The best reaction was when she ended up being the one asking me to worship her feet after I introduced her to my fetish. The worst, I don’t know, I guess when another woman didn’t like it, but at least she tried. I’ve been lucky in that respect — like my 17-year-old self, my partners have been curious about it instead of just calling me a freak and never considering it.
Man B: The best reaction was licking someone’s foot in a club who I had only just met (the grimey foot mentioned above).

Do you have any advice for Cosmo readers considering exploring a foot fetish?
Woman A: If you are curious about it, explore it with your partner. Play around with his foot with your own. If your partner takes good care of their feet, give a compliment and caress them. Have fun with it. #FootFetish.
Man A: I guess “don’t knock it till you try it,” really. A foot fetish is one of the most innocuous fetishes out there. It’s also safe sex. If you give it a try and discover you like it, then that’s great, and if it does nothing to you, at least you’ll have a fun/awkward story.
Man B: Just go for it. Don’t resist. #FEET.

Is Female Supremacy Taboo In Our Society?
KINKY NEWS NETWORK
A new look at Japanese bondage rituals
'TriMet Barber' with fetish for women's hair gets another 180 days in jail
Dude Gets Aroused by Fat Ladies Chewing Their Fingernails Off
Fetish Inspired Fashion
Dear Jian Ghomeshi: Keep Your Abuse Out of My Kink
Punishment Night Part 1
Previous