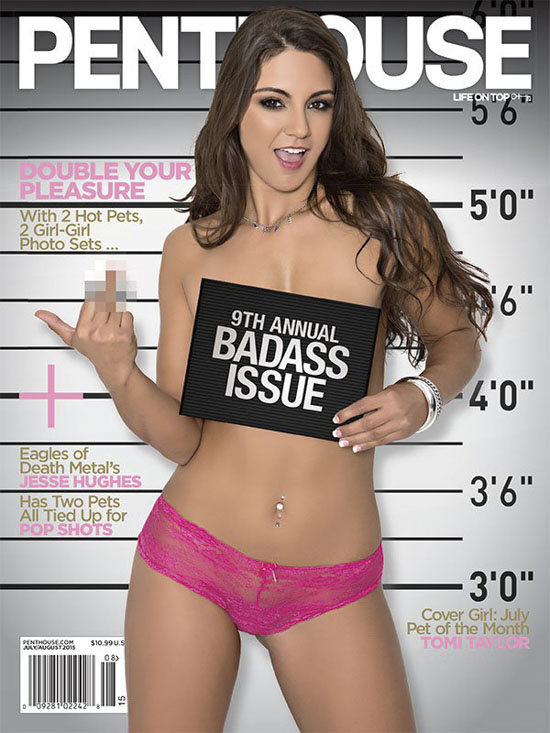 If you were keeping an eye on the Stockroom Twitter feed recently, you probably caught us showing off some shots from the July/August issue of Penthouse like proud parents. The photos are from a spread that’s part of Penthouse’s “Badass” issue, shot by TommyO and starring models Angela Sommers and Kendra James.

It also stars a lot of clothing from Stockroom, Stormy Leather, and Syren Latex, which is why we were doing the proud parent routine. Nothing validates our work more than seeing how people use our clothes and toys to bring their own imaginations to life. The imagination at work in the Penthouse pictorial is evident to even the casual observer, but the already vivid colors become just a little brighter if you know the story behind it. 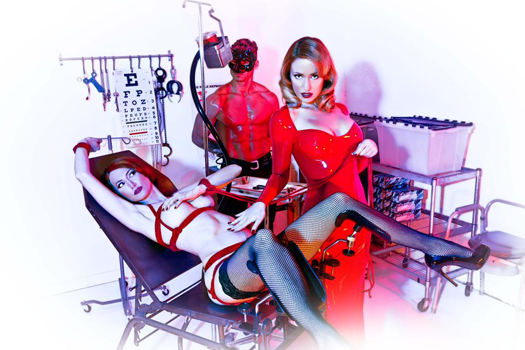 Every month, Penthouse invites a celebrity to come up with an idea for a pictorial. For the most recent “Badass” issue, they chose Jesse Hughes, frontman for Eagles of Death Metal to bring his vision to life. For inspiration, Hughes reached back over fifty years to an artist who had immeasurable influence on American culture, but who got little reward for his work during his lifetime: Joe Shuster.

Most people, if they know Shuster at all, know him for co-creating Superman with his childhood pal Jerry Siegel. With the 1938 introduction of Superman in Action Comics #1, Siegel and Shuster created not only an iconic character, but an entire genre. Imitators flooded the market, and eventually superhero comics evolved into the multi-billion dollar industry that we have today. Without Siegel and Shuster, our world would lack more than comic books; we wouldn’t have the blockbuster movies, video games, or television shows that now drive so much of pop culture. 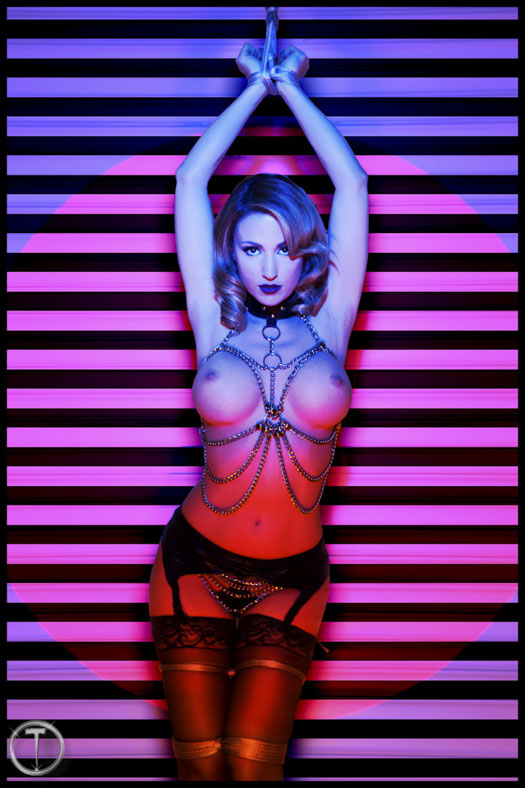 In a just world, Siegel and Shuster would have become wealthy within a few years. But before the first issue even hit the presses, they had signed all their rights to the character over to National Publications (now DC Entertainment) for a paltry $130 — about $2,000 in today’s money. In the decades to come, no amount of legal battling ever changed that. 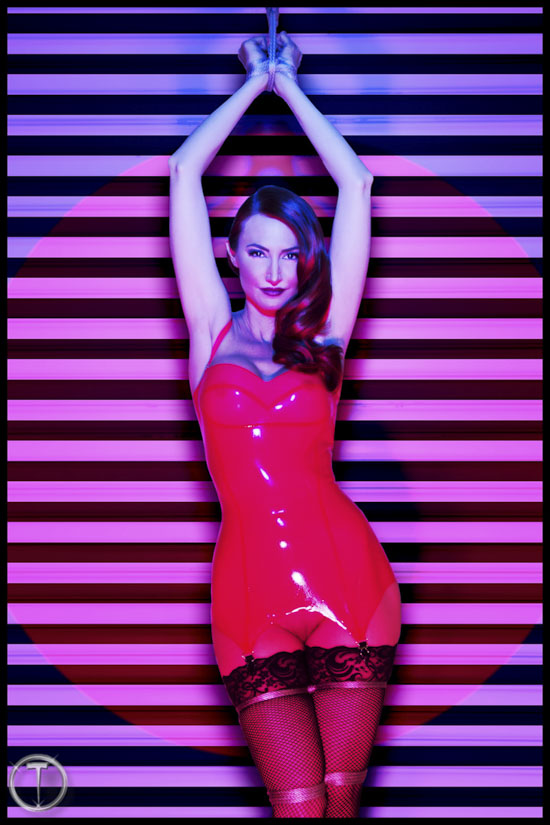 While National raked in money, Superman’s creators — especially Shuster — struggled to survive on whatever work they could find after their ten-year contract expired. In 1948, a lawsuit to recover their rights to Superman failed; Shuster went through several unsuccessful projects, including a superhero book called Funnymanwhich flopped after only a few issues. By 1954, he was anonymously drawing kinky fetish art for an underground magazine called Nights of Horror. 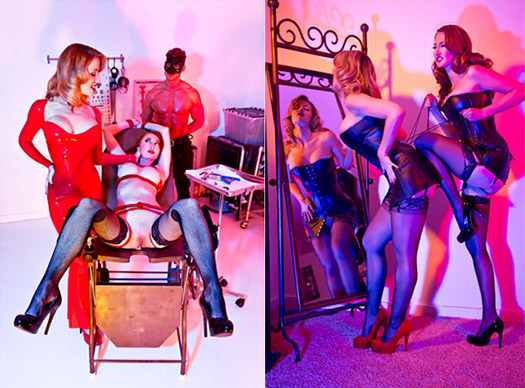 In an unlucky series of events, those Night of Horror was blamed for a string of serial killings in a sensational murder trial in the 1950’s. the books were subsequently banned and burned, which makes original versions quite rare today.

Even among comics geeks, Shuster’s time doing kinky art was only faint rumor until 2009, when comics historian Craig Yoe identified the pictures and collected them in a book called Secret Identity: The Fetish Art of Joe Shuster. In an interview on Fresh Air, he described how Shuster’s art style remained the same even though the content was so very different.

Well, these are like Superman gone wild. I mean, characters look quite a bit like Clark Kent, Superman, and his counterparts Lois Lane, Jimmy Olsen and the villain who plagued him, Lex Luthor. You think they’re the citizens of Metropolis, yet they’re in these very compromising sexual situations. I’ve been kind of amused and annoyed that some people have called the illustrations kind of quaint or charming because they are from the ’50s. But I think they’re anything but; there’s bloodletting and there’s whips and chains and a man menaces a young girl with a cactus….  The illustrations are quite strong, quite pulpy, yet beautifully composed, beautifully drawn, beautifully rendered in Joe’s strong, sure style.

That was the art that Jesse Hughes took as the inspiration for his Penthouse spread. Photographer TommyO says that the intent was not so much to reproduce the images themselves, but to capture the spirit of them in photographs. One of the biggest differences is that Shuster’s original art was black-and-white line drawings. The pictorial that Hughes and TommyO created uses color flamboyantly. 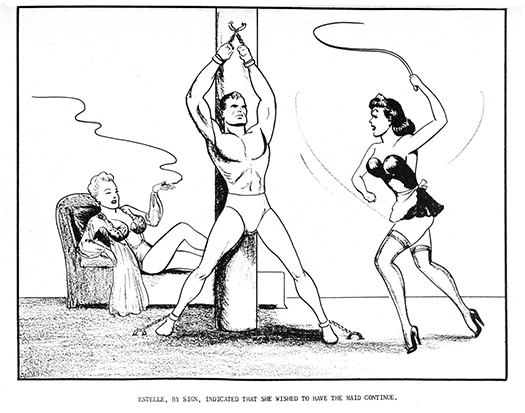 TommyO’s shots are lit strictly with bright primary colors that would be used in the printing process of a comic book: blue, red, yellow, and magenta. “Since he’s famous for his comic book images, it made sense to create a strong graphic element in the photography by adding wide swaths of color with gels on the lights.  I don’t believe we used any white light at all that day,” TommyO said. “Shooting this set was a definite challenge, but one which I really enjoyed .The idea was to make Shuster’s art jump off the pages and into real, albeit fantasy life. His somewhat simple drawings left a lot of space to fill when using live models and locations.  He also drew very minimal backgrounds in order to keep the attention focused on his characters.” 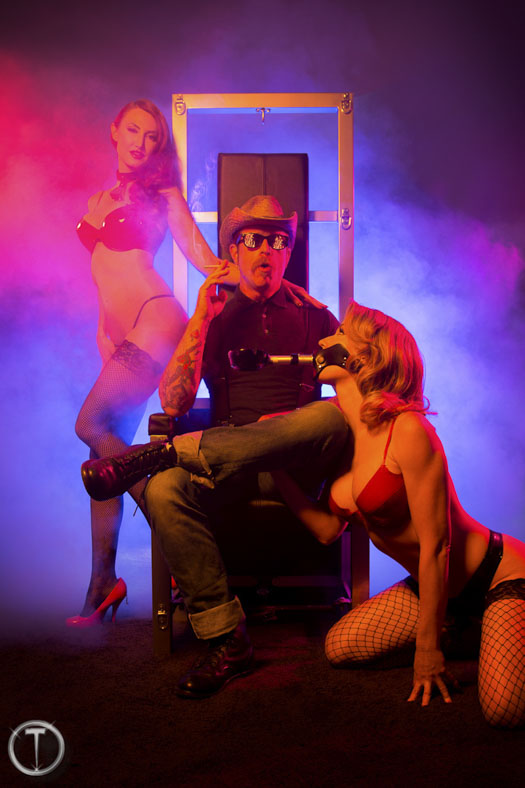 Anyone who grew up on superhero comics — whether the Golden Age ruled by the holy triumvirate of Superman, Batman, and Wonder Woman or the modern era, where the stories travel almost immediately to the movie screen — knows how easily their fantasy world touches on the sexual. Even before Shuster moved to doing art for Nights of Horror, his reputation was built on creating stories that were pure id; good and evil clash without restraint or inhibition in comic books.

That’s why we especially love having been involved in this particular spread. The reality of the latex clothing that Syren makes has a huge amount of overlap with the fantasy of superheroes. It’s one of the reasons that it works so well both as fetish wear for the dungeon or as glamor wear while striding down the red carpet. It’s why we love what we do. 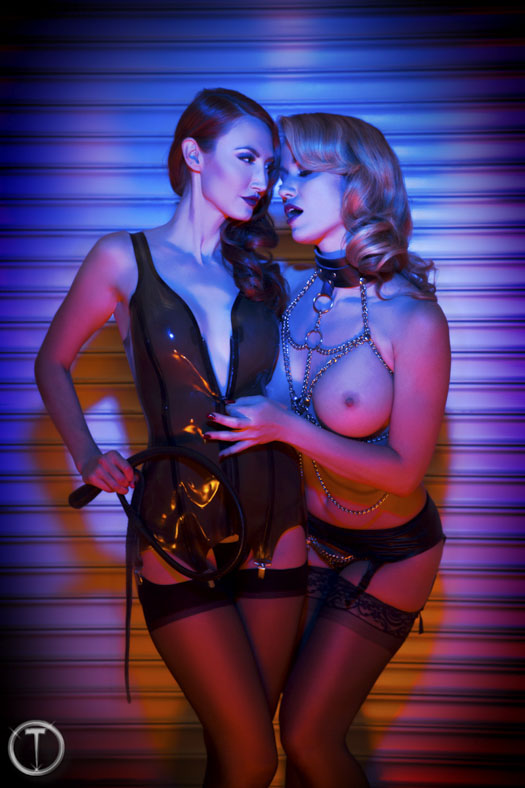 We had another great example of how those two realms overlap when Taylor Swift came to us to help outfit her music video “Bad Blood.” Swift has gotten seven nominations from the MTV Video Music Awards for “Bad Blood,” and we feel a little swell of pride in that, too. As both “Bad Blood” and the “Badass” pictorial show, the right clothes can bring the visual kick of a four-color comic book into real life. TommyO will be demonstrating that for us again very soon: he’s currently  using the same fashions from Swift’s video for another Stockroom shoot.

Congratulations to Jesse Hughes, TommyO, Angela Sommers, and Kendra James on their fantastic work. We hope that Joe Shuster would finally be proud to see how even his most unacknowledged work is remembered.