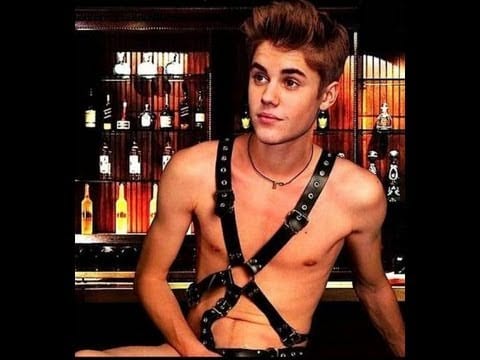 Justin Bieber took to Instagram to share a preview of the BDSM-inspired photos that make up hisInterview Magazine cover story. The Polaroids, which were snapped by celebrity photog Steven Klein, accompany an in-depth interview carried out by none other than Martha Stewart. Talk about a weird-ass collaboration. We dig it!

According to the intro, “Focused – the prince of pop is focused – on his cars, his stocks, on skating, on finding the best sound and making the best album possible. he’s confident. and we’re down with that.”

In the pics, the 21-year-old loses his shirt and shows off his tattoos and red Calvin Kleins while rocking a red leather glove, studded black leather mask and even licking a knife. Safe to say the kid just went full 50 Shades of Grey on us.

What do you think of Biebs’ new look?

Is there a better reflection of a culture than its pop stars? Like nubile little Tesla coils, our chart-toppers are very often both receptors for and projections of our collective energies. And, at 21, Justin Bieber, the kid who grew up playing for cash on the streets of small-town Canada and now plays to sold-out arenas across the world, is basically living like our collective id—if our collective id were jet-skiing on an ocean of money and fame: stepping out with models, befriending moguls, modeling underwear, and hooping it up at the Staples Center with Kanye West. Bieber’s Instagrams are perfect little portraits of adolescent appetite paired with the kind of material wealth to accommodate it: whirling around on a Back to the Future-style hoverboard, as he was in a recent video, while aboard a private jet.

But it’s not as if Bieber isn’t totally unaware of what goes on down here in the mundane world. In March, he threw a Friars Club-style roast of himself on Comedy Central, inviting the likes of Martha Stewart, Kevin Hart, and Snoop Dogg to poke some holes in the very self-serious, straight-faced image he’d been projecting. Look, he gets it. He knows what it looks like to be arrested for racing a Skittle-colored Lamborghini down the streets of Miami Beach. But he’s ready to laugh at himself too.

Bieber has, since the age of 15, been a massive, global star. His debut EP, My World, released in 2009, and the albumMy World 2.0, released the next year, both went platinum in under two months. The 3-D film “experience” Never Say Never (2011) is to Beliebers what A Hard Day’s Night (1964) was to Beatlemaniacs, if A Hard Day’s Night were shot in Imax, at Madison Square Garden. In other words, he has been drowned in love and affection—and their scary offshoot, obsession—for about as long as Obama has been in the White House. So, even as he begins to actualize as a real adult human, as he begins to individuate from his mother and his manager, Scooter Braun, Bieber probably has to break away from us, too. He’s coming out from beneath those beautiful bangs and superproduced hooks to become something more like himself (Bieber unplugged!). Because, good, bad, worshiped, and cut down to size, Bieber up to this point has been a part of us. But now, as he readies to release his new album, he is remaking himself on his own terms.

And as he tells his pal, roaster, and fellow tech investor, Martha Stewart, he’s in a really good place.

MARTHA STEWART: Hi. How are you? You’re recording?

STEWART: How fantastic. It was really fun to see you at the roast. What was the reaction to that?

BIEBER: I thought it was great. While I’m walking down the street, I constantly have people coming up to me saying that they loved the roast and that it was awesome, so I feel like there was a great reaction.

STEWART: There were zillions of impressions on the internet, and I thought you handled yourself amazingly well.

BIEBER: Thank you. And thank you so much for doing that for me.

STEWART: Oh, you’re very welcome. Did you feel uncomfortable at any point during the roast?

BIEBER: Oh, of course. But, overall, it was fun because I knew a lot of the people on the panel. It was all in good fun.

STEWART: I think it was just a little bit uncomfortable for all of us [laughs], but it was also fun. Do you remember when we first met? It was in February 2011. You were with your mom, and we were backstage at … Do you remember where?

BIEBER: No, I don’t remember where.

STEWART: It was David Letterman.

STEWART: I have a picture of the three of us. Your mom’s in the middle, and you look about 10 years old, but you must’ve been 16 or 17 because that’s only about four years ago.

STEWART: Yeah. It’s crazy. You had little bangs, and we’re just smiling. So much has happened to you since then. You’re 21 and, I would say, pretty sophisticated now. You just went to the Met Ball. How was that?

BIEBER: It was awesome. We got to see a lot of great people.

STEWART: Did you have a date?

BIEBER: I didn’t have a date. But I got to talk to Anna Wintour for quite a few minutes. We talked about fashion, and I thanked her for inviting me, because you have to be invited to the event. I know they use a pretty small list, so to be in that room with a lot of awesome people …

STEWART: Do you remember who the designer of your beautiful jacket was?

BIEBER: It was Balmain. And, actually, I guess I did have a date. It wasn’t a girl; my date was Olivier [Rousteing], who’s the designer at Balmain.

STEWART: Oh, it was Olivier. I was hoping that you would ask me to be your date. [both laugh]

BIEBER: Well, I would have.

STEWART: I would’ve worn my Balmain dress. But, anyway, you looked great. What was it like to grow up in Ontario?

BIEBER: I grew up in a really rural town, Stratford, Ontario, with 30,000 people. There’s a big festival thrown in the town. A lot of people travel from all over the world to see it, and growing up, I actually used to busk on the street. I’d play my guitar, sing, and people would throw money in the case. That was really fun, and I actually got enough money to bring my mom to Florida to go to Disney World, because I always wanted to go but we never had enough money. Growing up, I played a lot of sports. I played hockey and basketball and soccer.