What is a Calf Muscle Fetish Leg Worship

What is a Calf Muscle Fetish Leg Worship 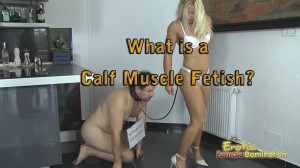 Within the world of muscle worship fetishism, some individuals desire to focus on specific parts of a body. In a combination of muscle worship and leg fetishization, the sexual attraction and desire of calf muscles is produced. While a seemingly trivial and small erotic behavior, there are communities and hashtags that are devoted to sharing images, stories and more related to the calf muscle fetish. It is suspected that because the calf muscles are close to the feet and the lowest muscle on the body that is realistically possible for body builders to work on, an element and desire of submission may have some association with its existence.

Calf muscles are considered within many bodybuilding circles to be one of the hardest muscles to develop, with very few compound exercises such as squats and leg presses utilizing them. The development of calf muscles is typically done via focused exercises that isolate the muscle, meaning a general workout routine will not develop them to a large degree. As a result, only those that have a large focus on attacking the muscle will develop it, meaning it is regularly the least developed muscle on the body of an individual that regularly attends the gym. Small calves are often considered a point of insult toward people that have large upper bodies, with many using the phrase ‘skipping leg day’ to refer to the person’s weak lower region, often said in a negative and offensive tone.

Calf muscle fetishism can occur in a variety of fashions from passive appreciation to active worship. A form of passive appreciation may be experienced in an individual that attends sporting events where strong leg muscles are prevalent, such as sprint cycling events. Bodybuilding tournaments may also be considered destinations where someone with a sexual attraction toward calves can enjoy that form of eroticism without the sensation of feeling weird or out of place.

Active forms of calf muscle worship include touching, rubbing, missing and massaging the calves of an individual. Some people pay for bodybuilders to model for them and to allow them to be touched: in these situations, the bodybuilder may go to extra efforts in order to increase the visual aesthetic of their calves. One relatively easy way to do this is via using the muscle in order to achieve a pump – a large rush of lactic acid toward the muscle makes it appear larger than in normally would, further developing the notion that they have incredibly large and strong calf muscles.

19 Women Talk About The Surprising Sexual Fantasies They Would Never, Ever Tell Their Boyfriends About