Alice did not really know how she ended up at the front door of the Male Sub Training Center. The architecture of the building looked very futuristic. It was shaped like a cube with reflective surfaces and the purple G logo of the Gynarchic Society at the top of the building. Buying a slave to become her submissive was not a project she had intended to give herself. Even though she was able to afford it, she had never felt the urge until one of her friends, Emma, ​​told her about it.

“You’ll see, once you experience female dominance you will not want to go back to the lifestyle you have now. The slaves are genetically modified human beings trained to be servile and entirely at the disposal of their owners. Imagine going home after a hard day’s work and finding your slave, a cute male sub, kneeling at the foot of your couch in your living room, ready to massage your feet and give you the best cunnilingus of your life. Wouldn’t it be nice to have that?” The idea was too hard to resist. She thought about it for a few days and decided to go to the Male Sub Training Center. 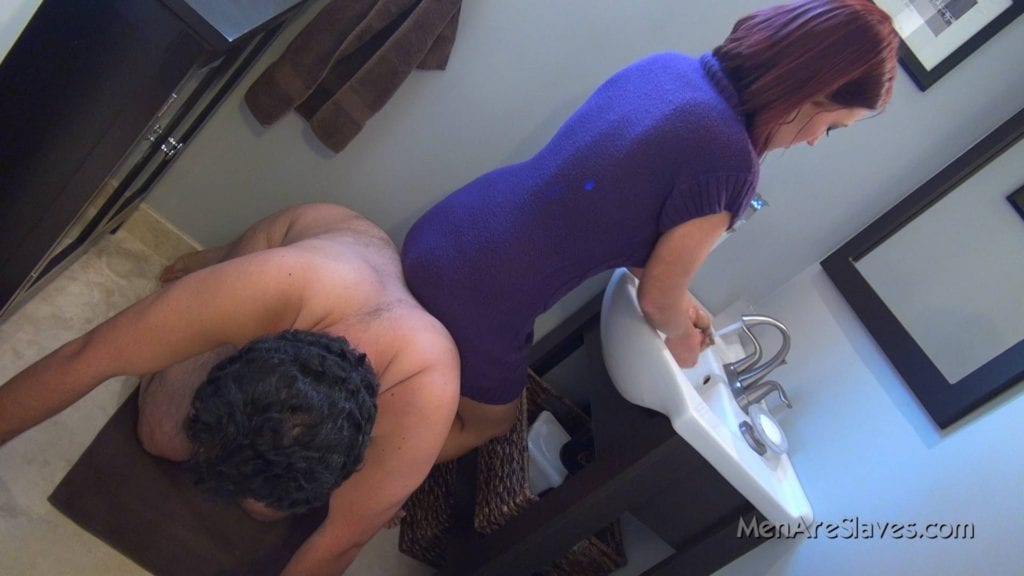 We Have The Best Product

With a decided step, she approached the door. It opened automatically with soft music and a young red-haired, hostess wearing the Gynarchic Society uniform came to greet her. “Hello, my name is Sylvia. How can I help you?” “I’m coming to buy a slave,” Alice said. “Well you are in the right place,” Sylvia said. “I was advised that your male subs are of exceptional quality.”

“Oh yes, our slaves are the best on the market. They are very expensive, but in terms of quality, you will not find better elsewhere. The male subs are selected at birth and raised at the Male Sub Training Center and trained throughout their youth. At the end of their training, we get perfectly qualified servants to satisfy their mistresses in all areas. Let’s take a walk so you can see the product.”

Alice followed the young woman to an entrance of a corridor, at the back of the building, which was also entirely white. “You see,” Sylvia explained, “the young boys we train here are genetically modified as soon as they turn eight through a very complex operation. This operation aims to completely change their digestive system. A fully trained male sub no longer needs to eat foods like ours to survive. He survives by feeding on his Mistress’ bodily fluids and manure but also from her smells.” “Her smells??? What do you mean her smells?”

The two women crossed a wide corridor and on the walls were posters showing different parts of the human anatomy. Sylvia pointed to one of them which had an image of the inside of the nasal septum of the human nose. “Exactly, the smells. Those of your private parts. The nose of a male sub works like an electrical outlet: a male sub needs about twenty minutes to sniff the feet of his owner to be fully recharged, though the anal scent is more effective. By inhaling the smell of your anus, your slave can be fully fed in almost ten minutes.” Sylvia then pointed to another poster of the anatomy of the mouth.

“The digestive system of our slaves is very effective. It will turn your urine and feces into nutrients. Of course, the taste will remain the same as we did not touch their taste buds.”
“In other words,” Alice said bewildered by what she was hearing about the male slaves
“Yes, our male subs can serve as human toilet slaves. You can relieve yourself whenever you want without worrying about feeding him otherwise.” “WOW!!!! That’s incredible!” Alice was impressed and even more curious about practicing female dominance with a male sub.“Isn’t it?” Follow me, I’ll show you the boys we have in stock.

My First Experience With Female Dominance